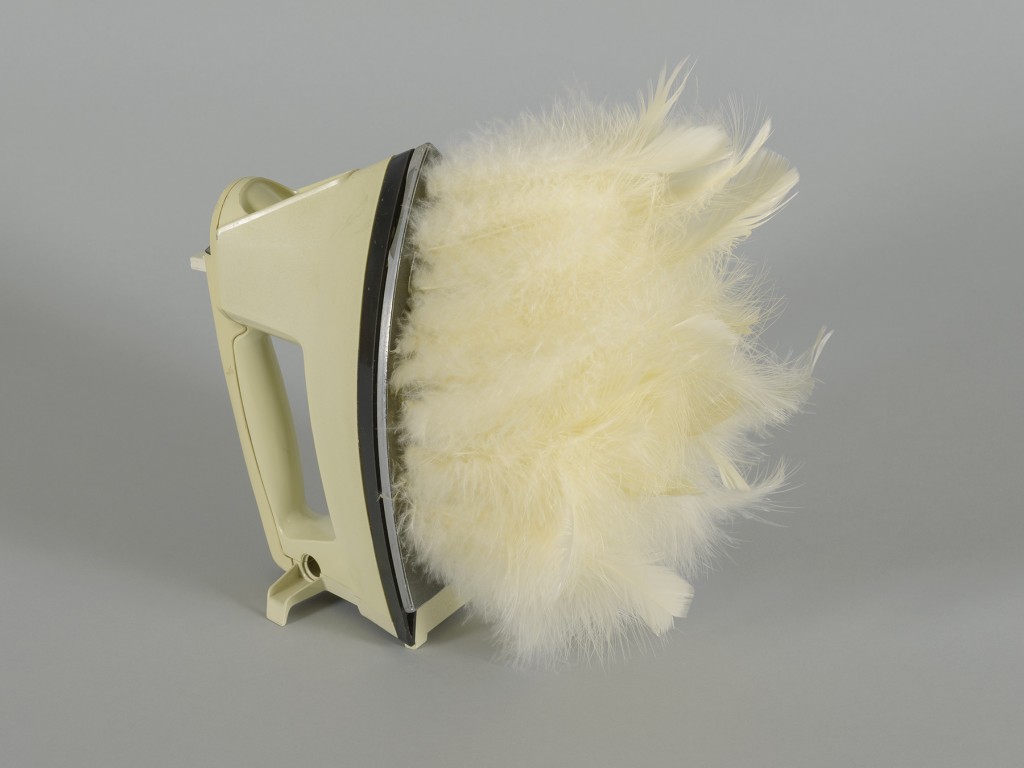 This summer the Kimball Art Center (KAC) abandoned its longtime location in Old Town Park City, a decision resulting from a dispute with city leaders about what was architecturally appropriate for the resort town’s Main Street and the Kimball’s long-term plans for a new permanent home. KAC has temporarily relocated to a former church on Kearns Boulevard, where they will continue their programming and exhibition schedule for at least a couple of years while they wait for their permanent structure to be reconceived and built.

The transformation of an iconic structure for traditional religious worship into one of secular, artistic worship, is emblematic of the type of manipulation and transmutation that is at the heart of this first exhibit in KAC’s new space. In Picturing the Iconic, 90 works from the foundation of Portland collector Jordan D. Schnitzer, by artists like Bruce Nauman, James Rosenquist, Keith Haring and Andy Warhol, have been packed into the former chapel in an exhibit that is dense with associations. The works are primarily prints and works on paper, many of which show technical experimentation that belies what is often considered a secondary or inferior medium: John Baldessari’s “Stonehenge (with Two Persons)” — in which the faces of the tourists have been obscured by circles, and the famous landmark reduced to cutout forms — has been printed on handmade paper so thick the iconic form seems a glued-on addition; Claes Oldenburg’s 1968-1970 “Profile Airflow (Axom & Platzker 59)” combines a cast polyurethane relief of the car over a lithograph print, to make a work that is as much sculpture as it is printmaking.

But imagery takes precedent over medium in this exhibition. The first image to greet visitors, hanging on an introductory wall a few feet from KAC’s entrance, is a print of the Statue of Liberty by Pop artist Roy Lichtenstein. Recent political events have reminded us of the negotiable power of such symbols. When the debate over Syrian refugees exploded after the terrorist attacks in Paris, Lady Liberty was held up as a symbol of our country’s long-standing welcoming of “poor huddled masses,” without distinction for country of origin. And she was invoked to refute those who demanded that, from places like Iraq and Syria, we only accept Christian refugees — as a recent book by Edward Berenson has pointed out, the Mother of Exiles was originally conceived as an Arab peasant: Frederic Auguste Bartholdi’s statue was designed as a lighthouse for the Suez Canal, and only became the goddess of liberty when that proposal failed.

As part of the same debate, a Virginia mayor recently cited the internment of American citizens of Japanese origins during World War II as a precedent for how we might deal with Middle Eastern refugees, and even American citizens of Middle Eastern origins. Roger Shimomura’s beguilingly simple painting “American Soldier” seems an appropriate response, both to the ignoble historic precedent cited by the mayor, and the intellectually suspect reasoning that would imprison tens of thousands for fear of a few. The acrylic painting is executed in a markedly flat manner, as if it could be a screenprint. The soldier of the title is decked out in a classic olive drab uniform and cap, and framed by a nondescript, dark background. He is bespectacled and smiling, the only clues about his identity the uniform and his facial features, which suggest an Asian background (Japanese, one assumes, based on the artist’s surname). The uniform itself is the icon, transforming whoever inhabits it. Without it, the subject might have found himself in an internment camp, but wrapped in the symbolic cloth, he immediately becomes a patriot, “one of us.”

An icon is an image imbued with power. The term originally comes from religious paintings, which some believe to have supernatural, intercessory powers, and which have been venerated for centuries by the faithful. They also were manipulated for centuries by the powerful. Politicians have always understood the power of the image, which is why ancient rulers emblazoned their effigy on their currencies: the magic aura of money became synonymous with the power of the ruler. In our own, democratic era, we think it good form to wait until a leader is safely in the grave before we put their face on bills or coins. And we feel a slight discomfort when a politician’s image becomes too iconic. Think of Shepard Fairey’s 2007 portrait of Barack Obama (a gold print of the Hope poster is here)— it was probably too effective a campaign image, becoming so iconic that it turned into fodder for Obama’s opponents, who wanted to portray him as a dictator.

This malleable quality of the icon, its ability to be celebrated but also be subverted, is one of the reasons it is has such a potent draw for many of these artists. Using the generally genteel form of the black paper cutout, along with racial stereotypes she finds in historical sources, Kara Walker subverts the iconic in a form of sneak attack that proves a more effective rhetorical device than any direct charge. A quick, sideways glance at her long, cinematic “The Means to an End: A Shadow Drama in Five Acts” generates feelings of nostalgia, warmth and comfort. We associate the cutouts with safe, literary experiences from a bygone era. A closer look, however, reveals disturbing imagery, such as a top-hatted gentleman holding a young black girl by her neck.

Willie Cole’s pictorial strategy is related, though much more oblique. Local observers may recognize Cole as the creator of “How Do You Spell America,” a piece purchased by the Utah Museum of Fine Arts in 2007, featuring socially charged wordplay using the word “America” on a traditional blackboard. Cole uses readymade objects both as artistic ends and artistic means. His “Steam’n Hot,” one of the few sculptural pieces in the exhibit, combines an upright iron with feathers to create a dynamic juxtaposition between the natural and the humanmade, the hard and the soft, the dangerous and the reassuring. In his “Five Beauties Rising” series, two of which are on display here, he uses old ironing boards (run over by cars and trucks to ensure a flat surface) as a printmaking matrix, to create evocative images that call to mind the domestic — they are named for individuals in Cole’s family who worked as domestic servants — as well as the political — the prints create ghostly images that call to mind slaving ships. The nostalgic aura of these simple domestic devices is turned into powerfully layered images that are not soon forgotten.

Nostalgia appears throughout the exhibit. Icons, after all, usually need time to accrue meaning and power. Robert Cottingham’s 2009 “American Signs: STAR” evokes the neon signs of the mid-century that have become a potent part of the American vernacular. Edward Ruscha’s “Mocha Standard” calls to mind the same era, with the sleek designs of service stations that sprouted up along the newly created Interstate system in the 1950s. Mark Bennett creates playful architectural renderings for the imagined living spaces of television characters from the ’60s, ’70s and ’80s. The homes of the Flintstones and Jeannie appear here (the Bradys and others appear in BYU’s No Place Like Home exhibit).

One person’s icon may be another’s cliché. That is, an image we think of as iconic may be brimming with power; yet, because of its very ubiquity, the same image may become emptied of its strength, worn thin, hackneyed. While the term cliché now principally resides in literary realms, its French usage — it’s the sound a camera makes when snapping a photo — reveals its origin in the visual. An image can be powerful and moving at its first creation, but by the time it has been reprinted and repackaged generation after generation, it loses its potency. Take the “Mona Lisa,” for instance. Or another work by da Vinci, “The Last Supper,” which appears twice in Picturing the Iconic, most notably in Jim Riswold’s work, where the iconic scene has been reduced to a paint-by-numbers exercise.

The painters, printmakers and sculptors who came of artistic age in the mid- 20th century were very conscious of the primacy of the visual image, as it rode on a wave of popularity in the form of ubiquitous glossy-image magazines and the advent of television (they could have no idea of the tsunami that would crash onto our visual consciousness in the age of the Internet). These artists became attuned to how the commodified image was overtaking the primacy of the written word and incorporated this understanding in their visual discourse. Robert Rauschenberg created hedonistic mishmashes of mass-produced images in his prints, paintings and assemblages — Budweiser cans and Betty Boop take the place formerly occupied by Madonnas and holy grails.

Andy Warhol was the most successful of these artists, able in his early works—before he began worrying about turning himself into an icon—to elevate the mundane consumer products that surrounded him, like soup cans and boxes of Brillo pads, into icons for an age of mass reproduction and mass consumption. His prints of Campbell’s soup cans from 1968 will be one of the first works visitors recognize in the exhibit, because it is an image (or series of images) that has become one of the most iconic artworks of the last half century. We know this because, like any good icon, Warhol’s soup can has become fodder for imitation and mutation by subsequent generations of artists. Utah’s own Ed Bateman, for instance, took Warhol’s conceit and added a touch of local flavor when he created a Campbell’s soup can print with the label spelled out in the Deseret Alphabet. At the Kimball, Enrique Chagoya’s “Pyramid Scheme” riffs on Warhol’s legacy in its own way, inverting the Campbell’s red to green, and changing the brand to “Cannibulls.” Stacked in a four-tier pyramid are flavors like “Ponzi Chowder,” “Stimulus Minestrone” and “Bailout Bisque.” This derivative work will never attain the power of the original, but it does confirm its iconic status.

Andy Warhol to Kara Walker: Picturing the Iconic is at the Kimball Art Center in Park City through January 4th, 2016.