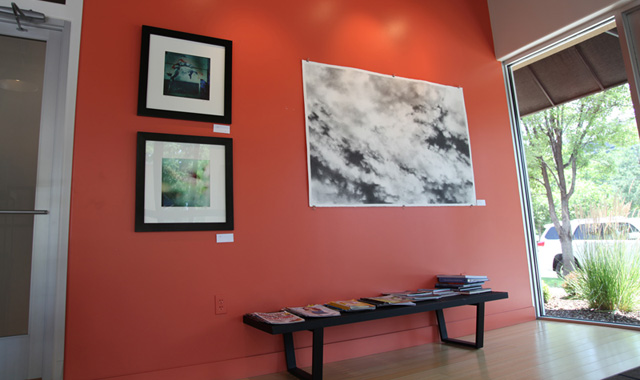 Walking into the current exhibit at Evolutionary Healthcare, I was struck by the contrast of a large-scale black and white drawing against a Day-Glo Orange wall — a color that signals Warning/Caution and commands passer-bys to pay attention. Regina Stenberg’s drawing of clouds on a truly cloudless day was perfectly installed (crooked title cards notwithstanding) to the right of the glass door entrance into what is a doctor’s office. This soft powdered graphite drawing took the edge off the day and made the space seem warm and inviting. The title, “ The Allure of the Rule,” gave me hope that I was in for a thoughtful art experience despite the pristine office-waiting-room decor.

The powdered graphite paintings by Stenberg are paired with photography by Portia Snow. The name Portia Snow alone incites a feeling of purity, freshness and white.  The concepts behind Snow’s photographs deliver on this account, though her photographs are tricky in that they are printed, with the use of a process called “antiquing,” in a manner that implies time and aging. Even though the photographs were printed in 2013, they look like they could have been made in the 1940’s. They are nostalgic via the use of Photoshop. The photos seem to reference a time when the photographer was traveling the world and seeking out new experiences with fresh eyes. Perhaps Snow went to an Italian Masquerade — implied by the photograph of a young man in a bird mask. But what makes this photo intriguing is that the bird-masked man is dancing on a white salt lake. In reality, the salt lake is anything but fresh; however, this young man in a bird mask makes me believe that perhaps the whiteness of the salt will transport me back to my more innocent childish days — when these types of costumes on twenty-something adults were slightly intimidating.  Further on, Snow’s photographs of paeonias indicate spring, suggesting hope and optimism for the future. The series of white flower photographs tucked away in the back of the offices indicate time via the installation. Unlike the paintings of Georgia O’Keefe, Snow’s giclee photographs are cropped in such a way that they imply there is more to see beyond the edges of the photographs. This series of white paeonia plants represents a possible opening or revealing, the artist coyly keeping from us the entire revealing of the spring bloom.

In the October 2010 edition of 15 Bytes, on the occasion of her exhibit of drawings at Finch Lane Gallery, Stenberg talked to Carol Fulton about her process of applying powdered graphite to the vertical watercolor paper with terry cloth to create the softness depicted in her sky drawings. Her new drawings on display at Evolutionary Healthcare and are dated 2013 and bring to mind quite a few references due to their abstract nature. Initially they remind me of an inked plate for a collagraph print, where strings are being used as a plate making material prior to printing. The white lines appear to loop and curve through the gray drawing surface as if they were trying to break through a smoggy day. The drawings create very dynamic compositions that exist solidly in and of themselves.  Upon further inspection, the titles (“White Bloom – 2013” for instance) attempt to connect the viewer to a context, perhaps also to the paeonia photographs by Snow.  After reading the title, my imagination shifts downward and I feel as though I am looking into water, at light trails created by tadpoles.  Historically, the drawings take me back to 1949 and the light drawings created by Pablo Picasso, artwork that inspired the drip/ action paintings by Jackson Pollock

While wandering through the exhibition I couldn’t help but think about contemporary artists working in veins similar to Stenberg and Snow. I think of Vija Celmins and her lighthearted but heavily detailed oil paintings and mezzotints of the sky and the water. Portia Snow’s flower photographs seem to be along a similar vein as the multi-media pieces called “Liminality” created by Vera Sprunt. I left the gallery feeling nostalgic and calm. I also felt confident that I am in good hands as far as technical skills are concerned. Snow and Stenberg make a visit to the doctor’s office a pleasant one.  Even though I didn’t make an appointment — perhaps meditating on the artwork would calm my mind enough and perhaps even give me something to concentrate on while I heal my mind in conjunction with my body. 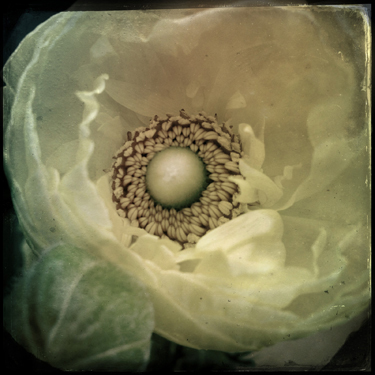