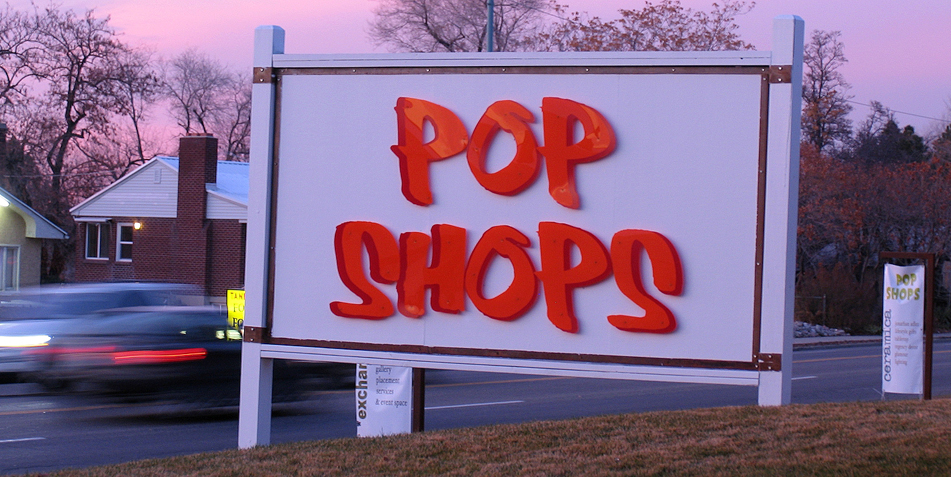 What is Pop Shops? The answer is not entirely clear, and that is, essentially, the point.

Its creators call it an exploration of “the relationship between fine art, social activity, and retail consumerism in a temporary, constantly transforming space,” adding that there are “no preconceptions about what it may (or may not) turn into.” In other words, it’s an experiment, and its most salient characteristic is impermanence … 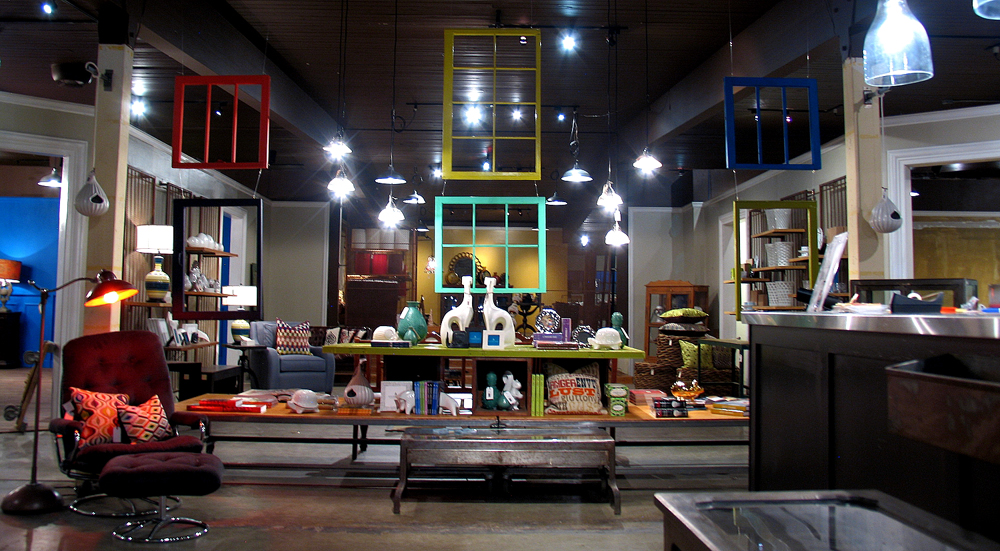 For now, Pop Shops has replaced Campo Home, an import furniture boutique that occupied a significant space on a strip of Salt Lake City’s Highland Drive, in the south end of the Sugar House neighborhood, for over a decade. Established in 1997, Campo was an interior designers favorite in Utah, and the store’s founders, Brian and Chris Seethaler, traveled the world looking for unusual, high-quality furnishings and accessories. Their mission was to offer a compelling alternative to big-box chain stores, and they did that beautifully, bringing in hard-to-find goods from over 20 countries. But, as of last November, Campo is no more. The Seethalers will lose their lease by Summer 2009, and the notion of moving a furniture store during an economic downturn proved less than appealing. They liquidated most of their inventory and closed Campo for good. This is where the story might end on a depressing note: another fine business bites the dust. However, judging by a recent conversation with Brian Seethaler, the couple is not terribly distraught about the prospect of moving on. As he put it, “Campo lived its life, and it was a great run. But, frankly, after working on this for 12 years, I was getting bored.” That may be tough for Campo fans to digest, but Seethaler has clearly decided that change can be a good thing, and that positive outlook may prove to be a boon for the Salt Lake art scene. 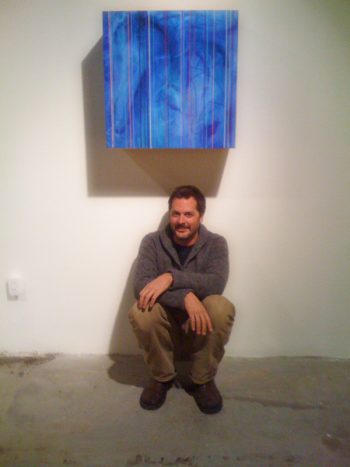 Facing their impending loss, the Seethalers decided to simply strip the building down and play with it a bit, while they still can. As the name “Pop Shops” implies, they are tapping into the growing trend of “pop-up” retail, an approach that emphasizes shopping as an event — a singular experience — rather than a predictable routine in a permanent location. There’s a sense of freedom and vigor about it all, and Brian Seethaler’s excitement is contagious as he gives an informal tour of the expansive property. He points out a wall where he’s stenciled lyrics from Supertramp’s “Breakfast in America,” done, he explains, “solely because it popped into my head.” Another enormous room is painted “in a shade of blue that nobody would ever let me paint in an apartment, or home, or office,” and so it goes, on and on throughout the 20,000-square-foot space. Much of the “new” inventory on display actually represents years of Seethaler’s personal collection of industrial furniture, now available for sale. Then again, these pieces might be taken off the market at any time, depending on how things evolve, and what moods strike the proprietors. The plan is that there is no definitive plan, and the only clear agenda is an increasing focus on art. “Fine art, not-so-fine art, experience art, and plain old empty space,” are all fair game, says Seethaler, and if you visit Pop Shops, you will be confronted with the question of your own definitions of art as soon as you walk through the door. 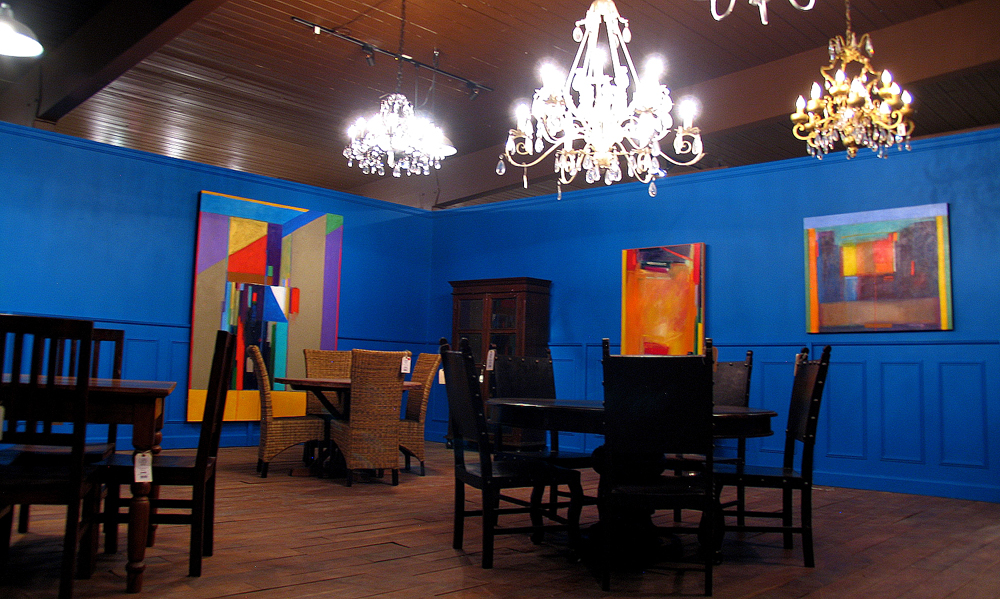 Over the years, Campo housed several successful art exhibits, and, with the advent of Pop Shops, that aspect of the company’s history has been translated into a full-blown gallery. The first official Pop Shops show, Size Matters: New and Revisited Work from John Bell, features over 20 works, including paintings, mixed-media compositions, and prints by the up-and-coming multidisciplinary artist. The works range in size from 4” X 4” to 14’ X 6’, and represent several years of Bell’s work, which combines elements of abstract expressionism, geometric abstraction, pop art, music, theater, modern sculpture, and architecture. When Bell heard that Pop Shops was seeking artists, he responded immediately, and it quickly became clear to all involved that this would be an ideal match. As Bell recalls, “I read about Pops Shops in the 337 Project newsletter and called right then. When an opportunity presents itself, I don’t hesitate, I jump on it. Some of my newer work was going to be in Miami (at the inaugural Artist Fair, held in conjunction with Art Basel Miami Beach), but I knew I could get it back in time for a January opening. I’d been prepping for that and other upcoming shows, so I had everything ready to go. I’d never met Brian before, but as soon as we talked, I understood his vision and wanted to contribute, so we’re making it happen.” 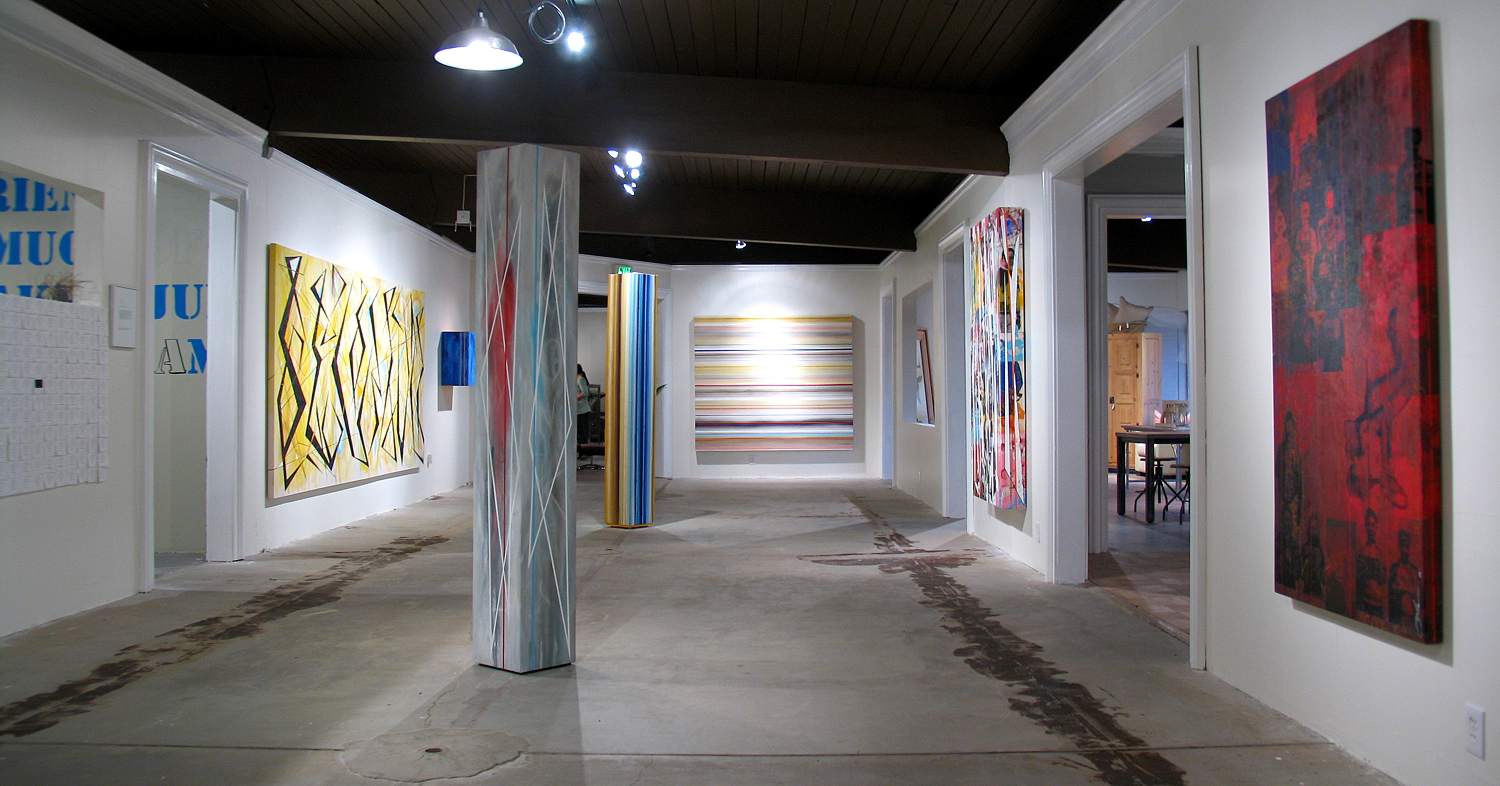 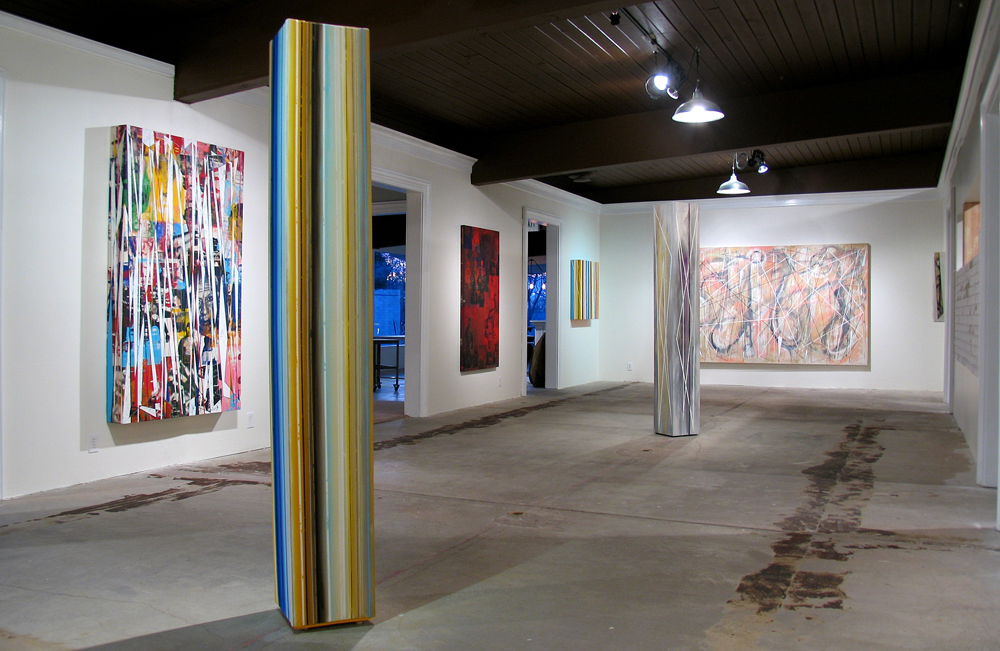 As for Seethaler, he describes Bell’s work as “notable because it has blown through the established intersections of abstract expressionism and modern social and graphic design to exist in a new and singularly relevant space.” He goes on to say that, “John’s work stands far above the crowd’s by continuing to stretch artistic boundaries while maintaining surprisingly accessible connections to the human condition that have inspired great art always: desire, love, despair, confusion, contemplation, reflection, doubt and inner peace are all evidenced in works that challenge our ideas of form, color, kinetics, and spatial relationships. I don’t mind in any way sounding turgid when describing Bell’s work, because once you experience it personally, you’ll understand how bombast and powerful composition and execution can change your way of thinking about art and architecture, and, well, life.”

The Pop Shops gallery allows for a comprehensive view of Bell’s progression as an artist, which says a lot, given his prolific career, and the scale of some of his pieces. And while he has been busy, showing in 24 exhibits across the U.S. over the past five years, Bell is intrigued by the possibility of using this exhibit to participate in what he and Seethaler both see as time of extraordinary creative momentum in Utah. Together, they banter about the possibilities of advancing the local art scene, of making efforts to keep that momentum rolling. The ambition goes beyond their respective careers and into the artistic community as a whole, and broad-based collaboration is a key element of the discussion. Seethaler sees himself as a facilitator, working outside a traditional gallery model to help “democratize art” for artists and viewers alike. He says he will offer “experience and conversation, not representation,” and, when it comes to methods for making that happen, he intends to leave the possibilities wide open.

While Pop Shops may or may not continue to exist beyond this spring, Seethaler says that he will definitely take his Crandall Street Project, an art-specific idea-within-an-idea, on the road. The southwest corner of Pop Shops is reserved for the Crandall Street Project, so named for the street that intersects with Highland Drive along the south side of the Campo/Pop Shops lot. The project will be a vehicle for Seethaler to convey his “own take on what is interesting and possible in creating accessible, artistic installations that will make at least some people curious.” He is, and will be, soliciting proposals for the Crandall Street Project, and, after losing the Pop Shops space, plans to “squat” in empty retail storefronts around the Salt Lake Valley. In the meantime, he will be co-hosting an opening and artist reception for “Size Matters” on the evening of January 10. If you visit Pop Shops soon, expect to be greeted by an iconic image of Johnny Cash famously flashing an obscene gesture (John Bell, “Double Cash,” 2007, digital print) hung beside a Hafiz love poem, scrawled right on the wall and punctuated by tiny, hand-painted honey bees. Or, maybe not … it all depends. Campo’s tasteful, carefully orchestrated home scenes are long gone, but its replacement, however temporary, is no less intriguing. 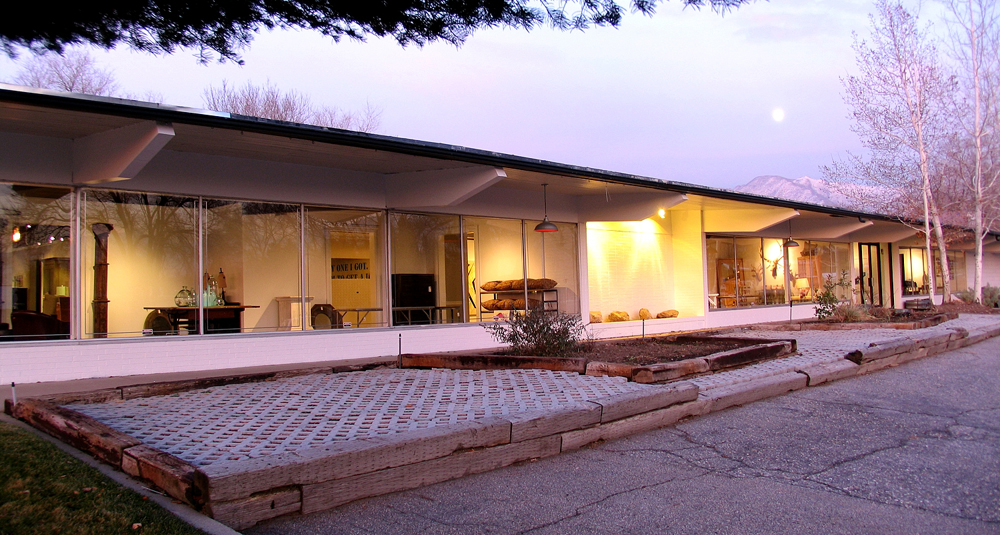