By 15 Bytes on March 23, 2012 • ( Leave a comment )
Ten years ago Poor Yorick Studios held its first Open Studio Event at its downtown Salt Lake location (we introduced our readers to the studios, and its founder Brad Slaugh, in our October 2002 edition of 15 Bytes). In 2006 the Salt Lake location closed and Slaugh moved the circus to a new location in South Salt Lake.  They joined forces with Spectrum Studios, located a block away, and the two began holding bi-annual extravaganzas of art, music and entertainment (see our photo essay on Spectrum Studios here).
Tonight Poor Yorick celebrates its first decade with their big Anniversary Bash on Friday, March 23 from 6-10 pm. Of course there will be lots of art and music. You’ll also find Poor Yorick tee shirts, tote bags and stickers, and as part of the celebration Vertical Diner right around the corner is offering a Poor Yorick Special that night for anyone going to the event.
Also, if you’re a Tony Smith fan he’ll be back with more drawing madness and signing the final copies of his limited edition book, reviewed in our November 2011 edition of 15 Bytes (yeah, if it seems like we have a 15 Bytes article on just about everything, well that’s what happens when you’ve been around for ten years).

And of course they will be joined by their friends at Spectrum Studios (196 W Malvern Ave). 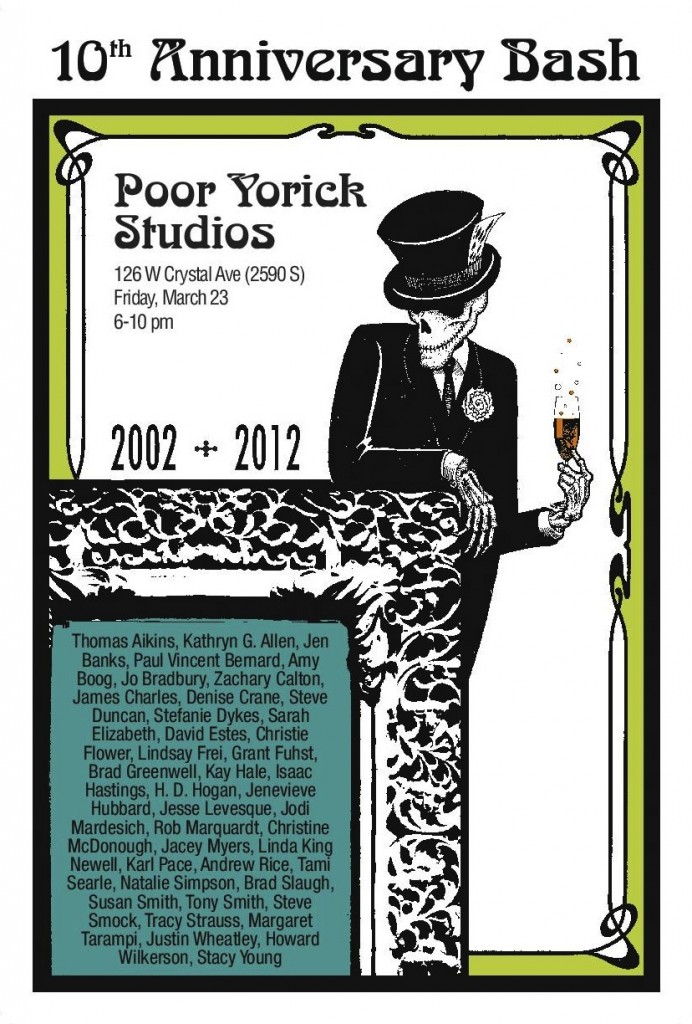