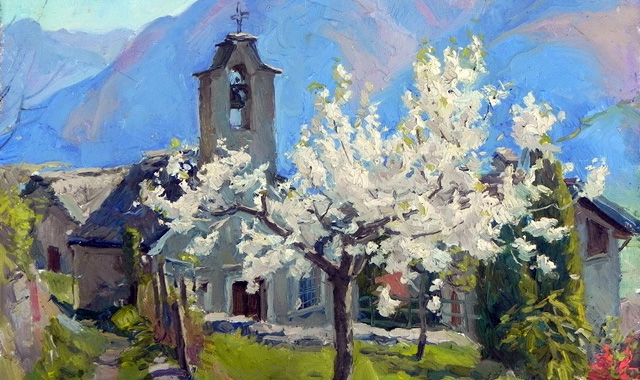 Those who are under the impression that plein air painting is a practice of subject and technique exclusive to the western United States may experience a reality check this month upon visiting Slusser Gallery, where for the March Gallery Stroll the work of owner Mark Slusser will be featured along with those of plein air painters Antonin Passemard and Anastasia Dukhanina, a married couple who currently reside in Auxerre, France. The awakening will not be entirely the simple discovery that plein air is a global artistic phenomenon, but that Passemard and Dukhanina are each able to achieve in their “open air” landscapes a definitive, characteristic method, transgressing perimeters and breaking new ground of what is generally considered traditional plein air painting.

Passemard, who grew up in Auxerre, in the Burgundy region, recalls a childhood where art was “nothing special, it was something normal. It was how it should be. I could not live without a painting… it needed to be there. Painting was something I had to do, it was something that had to be done, nothing more than that, really.”  When he registered at the Beaux Arts school in Auxerre, Passemard felt he had reached certain limitations as an artist, and it was through the academic system that he would learn the tools to become better.  There he gained an appreciation and connectivity with late 19th-century Russian representational modes of painting. He continued his education at the École des Beaux-Arts in Paris, but ended up quitting, not finding what he was looking for in this educational system, disappointed in what was now centered on conceptual art practice. However, at the school, he gained a strong appreciation and affinity for German Expressionism, an influence still evident in his work.

In 2001, Passemard left for the United States, moving to Portland, Ore., and traveling through many other states.  In 2012 he discovered an article about German artist Ulrich Gleiter.  “I really liked his painting; it was completely different than anything you could see in America,” recalls Passemard.  Gleiter had studied in Russia and the Repin Academy, and he and Passemard began corresponding with each other. “We talked about other painters, about some other friends and of course he talked about Anastasia.”

Anastasia Dukhanina had a similar experience growing up with an interest, practice and early art education in formative art environments.  In her general education, from age 7 through 14, Dukhanina immersed herself in her own reality of art, amid dire economic hardships of 1990s Russia.  At 15, she entered art college in her home city of St. Petersburg, where she chose to study interior design. “In Russia, interior designers are taught to draw and paint as real artists,” she says. “We did everything by hand: watercolor paintings, all technical parts. To be honest it was very useful.  But I realized I loved painting more than design,” says Dukhanina, who would go on to study at the Repin Art Academy Since 1991 this has been called the St. Petersburg Institute for Painting, Sculpture and Architecture?in St. Petersburg, before she would meet Passemard, whom she married last November.

In 2013 Passemard met Mark Slusser at a plein air convention, and in 2014 he and Dukhanina began to be represented by the gallery.  Says Slusser, “I thought they were both masterfully trained, Anastasia in the classical Russian style, impressionist, and Antonin, in a Parisian style. In Antonin’s case, it is the heavy impasto, and they have influenced one another so we have a mixture of Russian and French, which is really exciting to see.”

Dukhanina has a plein air style that is very much her own, and her subjects transcend the convention of landscape but include genres ranging from urban settings to home interiors, still life to portraiture. Her hand is quick but heavy and her stroke expresses more when she uses less.  But the unifying component in her work is a structural element that works to her advantage.  In “February” one gets a sure sense of the structural quality and utility of Dukhanina’s work. The atmospheric resonance rings absolutely true and the coldness of the winter month in Russia is undeniable, and so is a further design element brought about by the linearity of the trees that bring the eye within the centrifugal nature of the three main elements, the sloping shed, the house, and the house in the distance, that focus the eye on the tight area of the center, causing almost a visual claustrophobia that only enhances the atmospheric climate by a measurable quality of design.

“Spring” functions as much structurally yet in a counter-manner, releasing the spirit into the openness of the refreshing spring air. Here, there is a terrace with a church just below, with a steeple rising almost to the line of the soaring mountain above, and to the left and right of the church, divided by a fence, are old housing structures. This creates a linearity and horizontality, but even more important are the arms of the tree in full white spring blossoms, opening arms to the sky and to the mountains along the horizontal and upwards, in a manner of jubilation for the spirit of the season. It is a masterful articulation of mood, not only in brushwork, but in formulaic design and structural articulation by Dukhanina.

Of course, this makes sense to the reader who recalls the importance of Dukhanina’s education and training in interior design, so fundamental to her formative education as an artist.  Although she chose not to remain in interior design, this was a fundamental part of her education, a time when she says she felt very secure as an artist and as a human being and much of her plein air style derives from this intensive study, which has its own logic and structural sensibility.

As one looks through Passemard’s works, one will find repeatedly an assiduous brushwork, a lively, dense impasto, asserting rich color, yet never is there any semblance of feeling of domination by color or the brushwork, but perpetually a comfortable sensibility of refreshing vigor and a harmonious atmosphere of balance as each mood is greeted with pleasure and satisfaction.

What captures the viewer’s sensibilities in the woodland scene “Fall Colors” is the density of natural form expressed through a vividness and richness of hue that finds a balance of equanimity upon the viewer.  This unique balance is achieved by the artist’s marvelously vibrant and expressive color palette placated by the confines of a limit between the use of lights and darks.  Passemard invites the viewer into the environment with the strength of the mood but does not overwhelm; he creates a tonal range that results in a feeling of comfort surrounded by the intensities of a natural beauty without any sense of heaviness. There is allowed a feeling of wonder and awe in nature’s creation, a feeling of possibility without a sense of being pushed to the limit.  There is a natural give and take that comes across as being smooth.

In the cityscape “Ravieres,” there is again a strong and tumultuously cloudy sky, terra-cotta rooftops, stucco walls, greens in many hues and tonalities, all painted with a zealous richness and lushness, so that the viewer feels the fecundity of the afternoon over this town, as birds take flight in the distance. Yet as rich and as zealously as Passemard paints, he strikes a remarkable sense of tonal balance, with a scene that is brimming with gestural color, yet the viewer feels an ease and tranquility on this breezy afternoon moment.

Though in Utah we love our local plein air painters, the genre is obviously a global phenomenon with practitioners expressing their personality and training in locales all over the world. Passemard and Dukhanina have made Auxerre their home for art and passion, but they continue to travel, painting and teaching: they teach painting courses in France and will be teaching in St. Petersburg and then in the United States. The results of their diverse approaches are on exhibit this month at Slusser Gallery and shouldn’t be missed. With Dukhanina’s steadfastness and Passemard’s level passionate vigor, the young painters are both sure to experience much greater happiness and greater success as they continue to endeavor in what they love, together.