Coloring Outside the Lines: Willie, Evan and Tony Smith 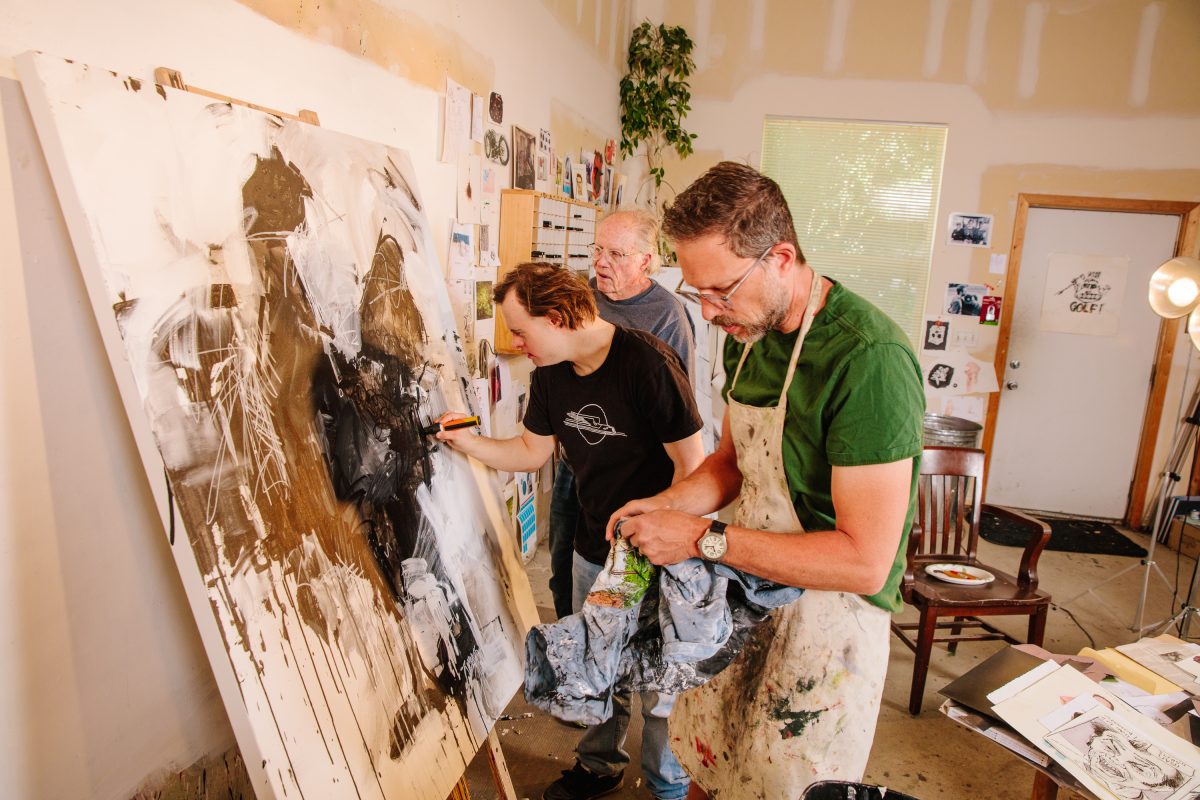 Willie, Tony and Evan Smith at work on a chicken drawing in Tony Smith’s studio.

Like clockwork, at 10 a.m. every Monday, Wednesday, and Friday, Willie Smith, who has mild Down syndrome, accompanies his father Tony from their home in the Avenues to their West-side studio across the street from the LDS Church’s Welfare Square in Salt Lake City. Willie immediately goes to his drafting table, placed next to his father’s, and gets right to work — no distractions, intense concentration — while Tony cranks up the sound system and begins his own drawing. Using colored markers and pens, this father-and-son team work on individual projects and collaborate on others, often playing off each other’s effort.

Recently, they’ve taken up the challenge of seeing how far they can push commercial coloring books and paint-by-number kits, with “number 42” being Tony’s favorite color. Results are fantastically satisfying to those few who have seen them, especially the collaboration pieces. And there began the idea for an exhibition by not only Tony and Willie but also Tony’s eldest son, Evan, who is art department chair at West High School. Evan comes by the studio, usually on Wednesdays after classes, to join the collaborative fray.

“There’s some great stuff going on when the three of us get together,” says Tony. “That is, if we can keep Willie from getting his hands on the fat black redacting marker.” The small viewing circle of their work will be greatly expanded while 3SMITHS is on exhibition at The Alice Gallery,  July 12 — September 6. The individual and collaborative work by Tony, Evan, and Willie is inventive, mostly humorous, and illustrates how it is not always a strength to “stay within the lines.” 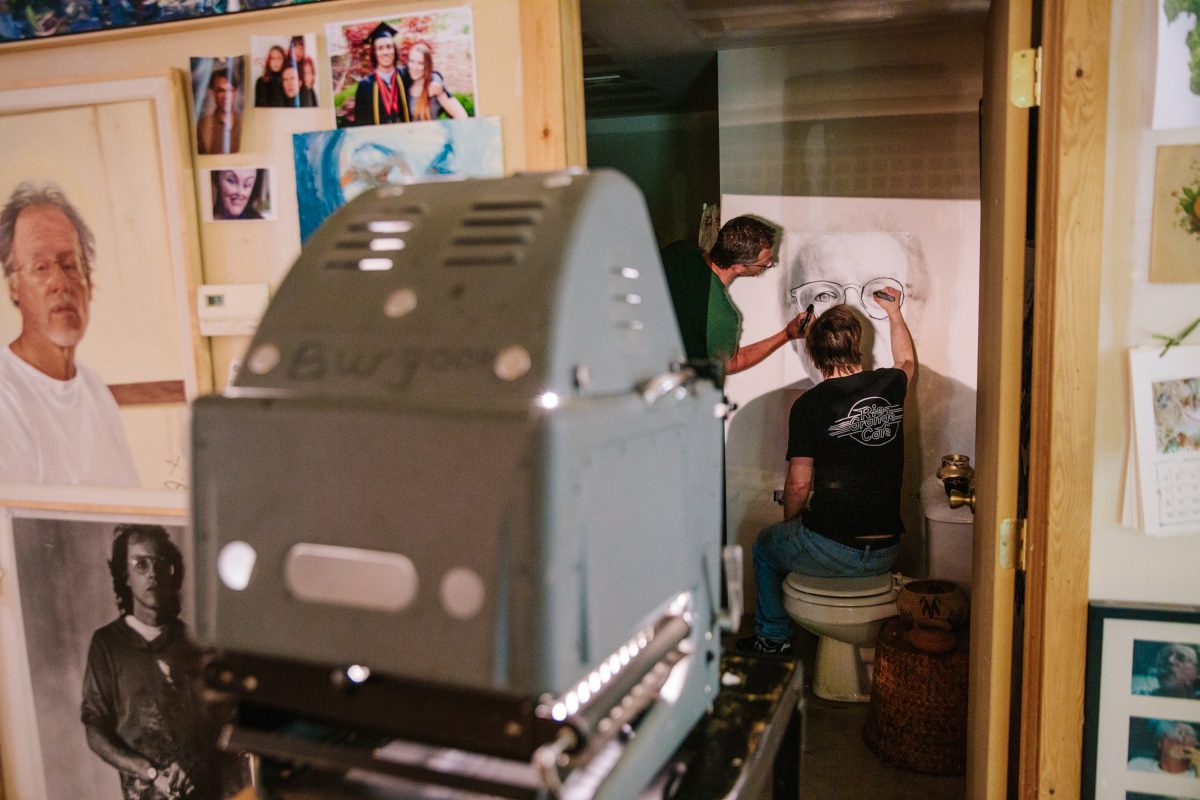 Evans and Willie Smith use a projector to trace a large portrait of their father Tony.

Tony talked with me recently about the three Smiths:

Willie knocking out his ‘Sopranos’ drawings on the projector has a little art background having studied with Mrs. Dallin at school and with his brother Evan for a year where he drew a rope every day in class. But he knows color and he loves to trace and copy.

Evan, who runs the art department at West High, is still in the hunt cranking out beautiful monoprints every year, or so.

Me? I’m burnt and over the hill and draw every day more out of momentum than inspiration. 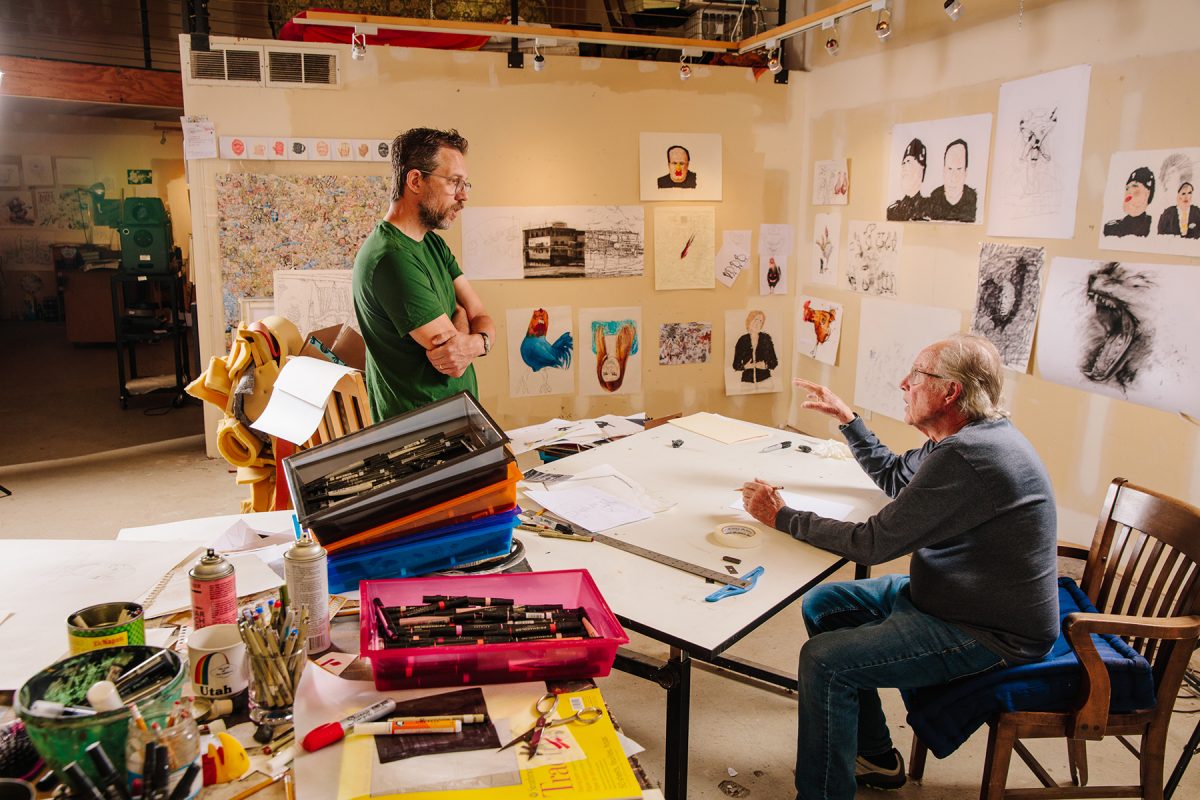 Evan and Tony Smith in the studio, discussing chickens, photo by Simon Blundell

And some of what they’ve been working on:

Chickens have become a running theme for our drawing sessions where we often embellish each other’s work. The chicken drawings evolved out of a birthday card Willie and I drew for my daughter-in-law, Carolyn, who raised chickens. Willies chickens were just so choice that we made him keep drawing them, three-a-day, like pills. That brought out Evans foxes and my chicken jokes.

When not working on coloring books, Willie draws about his TV favorites — Jessie, The Sopranos, coupled with his other Italian tough guy, Mussolini. His fondness for Italians, especially in the 1930s, is kind of a mystery. Movies like Amarcord and Cinema Paradiso play a nostalgic role for him, as do stories I tell about listening to World War II on the radio as a kid. He just loves Italians and their hearty and direct ways.

While we worked, things came to the surface one day when Willie, upon seeing a drawing of Tony Soprano he gave us to work on, said “Nope!” He was mad and immediately set to repeating the whole drawing again as the previous one was now “ruined.” And we came to realize that whenever we gave a drawing to one another to work on that they ruined it. Or did they? Maybe we needed to expand and be more flexible, let go of a few of our favorite tricks.

Turns out Evan and I cue off Willie ruining his Soprano drawings and trying to give Mussolini some style. Willie is the genuine artist, the authentic one; Evan, talented and smart, loves form, the marks on the surfaces, and the story in the work; and I try to make each work into one big serious joke. 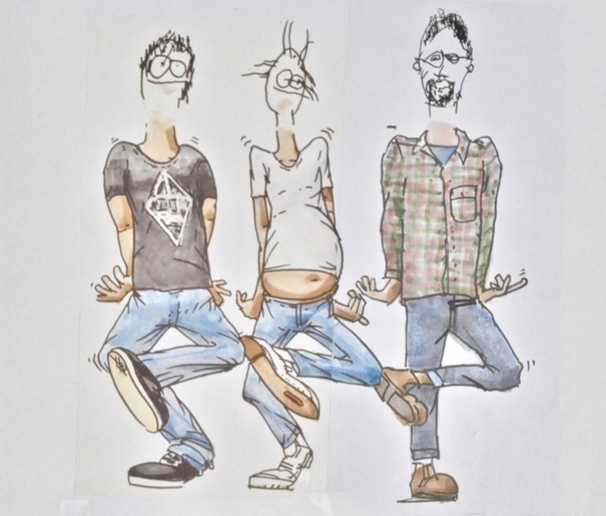