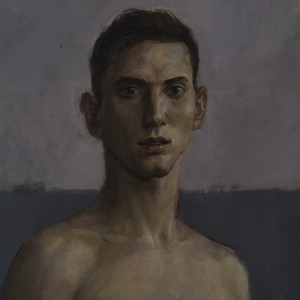 In so many ways our modern societies are enlightened, more civilized in matters of personal liberty than was true in the past. Most of us probably take for granted that the ongoing debate over same-sex marriage marks a watershed in evolving public attitudes. Yet while there has been intolerance and intransigence in the recent past, evidence suggests that many older societies were far better at embracing human variation and individual choices. Some Native American societies allowed men and women to choose gender roles without regard to biology, and ever since Victorian times, westerners have been aware of how sexuality played a much more elaborate role in some religions of the Indian subcontinent. Asma Kazmi, one of twenty four artists participating in Battleground States, the main exhibit at UMOCA through January 5, presents a far more nuanced picture, which may surprise most of us, about the “Hijra,” a third sex believed to represent the arrival on earth of a superior, more perfect being. In fact, evidence is turning up on many fronts to suggest that human societies in general were far more tolerant when they were more cohesive, and it is the controversy we find ourselves embroiled in that is the truly modern phenomenon. Despite the denials of our religious and political leaders, diversity plays a far larger and more complex part in human sexuality throughout our history, right up to today.

Battleground States brings together a wide range of artistic approaches that comment on gender roles in ways that vary from subtle to blunt. From a painter like Trevor Southey to the autobiographical cartoonist Treshelle Jeffery is a dynamic range of traditional image making, but here also are neon and vinyl signs, a doctored clock, reworked advertisements, dance and performance on video, and variations on photography that the bankrupt directors of Kodak never imagined. A surprising number of these innovations work, making the show not just a sampler of current ideas about gender, but a chance to compare different technical methods of thinking visually about a single—if large and multi-dimensional—human question. Where today’s dominant media tell stories they encounter, thereby giving voice to the silenced, here in the backwater of art we find works containing the crucial element of memoir: a personal testimony. And so it is here that we are reminded that artists are never merely witnesses. They participate in the life they record and memorialize.

Battleground States is at the Utah Museum of Contemporary Art in Salt Lake City through January 5, 2013.