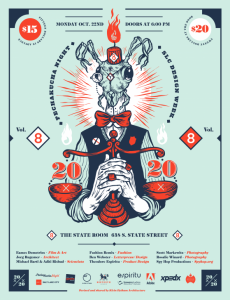 Pecha Kucha night is back and once again will be held at the State Room, 638 S. State St.,  on Oct. 22 from 6 to 10 p.m. Tickets are $15 and on sale now at www. thestateroomslc.com and they sell out fast. As we told you in detail in our February issue, this exhilarating event, which started in Japan and is held in cities around the globe, is based on a 20 x 20 format. Each of an eclectic group of presenters is asked to give a presentation of 20 slides that are each shown for 20 seconds on a topic that interests him or her. It invariably will interest you, too, and if it doesn’t it’s over in six minutes and 40 seconds and you are on to something else.

This time Pecha Kucha Night and Salt Lake Design Week have joined together to kick off Design Week by showcasing a range of presenters that include graphic design, letter press and product design but also include such disciplines as architecture, science and chemistry, video , photography, art and culture.

These stimulating evenings, held about three times a year, draw a mishmash of interesting souls. You are invited to come early and stay late to meet, mingle and party with people from all the design fields and beyond. The State Room has a full bar and Beehive Cheese will be there with a variety of their offerings. Music by designers.

Scott Markewitz is recognized as on e of the most influential outdoor photographers in the industry. His images have appeared on more than 400 national and international magazine covers and in advertising campaigns for most major ski, cycling and outdoor brands. He was featured in Men’s Journal as one of the World’s Greatest Adventure Photographers; is the only photographer in Ski Magazine’s list of the 100 Most Influential Skiers of All Time and the 2000 recipient of Ski Utah’s Excellence in Journalism award.

Aditi Risbud is a science writer and materials scientist who earned her doctorate in materials science and engineering at the University of California at Santa Barbara. Her enthusiasm for writing and engaging in conversations about her subject pointed her to a career as a communicator of science rather than a practitioner. Michael Bartl is an associate professor of chemistry and adjunct professor of physics at the University of Utah. There he leads a research group with a focus on functional nanostructured materials for energy and information technology applications, including bioinspired photonics, magnonics and nanocrystals.

Theodore Espiritu is the founding principal of Espiritu Design, an industrial design and product development firm in Salt Lake City. He and his team have completed a diverse range of products from prosthetic feet to trekking poles. Their designs span numerous industries, including consumer electronics, medical devices, and outdoor products, to name a few.

Eames Demetrios is a filmmaker, artist, design exponent and storyteller whose current large-scale project is his parallel universe, Kcymaerxthaere, a global work of multivalent storytelling, telling stories through the physicality of the world. He is also a filmmaker, having made over 70 films (mostly short documentaries, but some fiction features and animation) on topics ranging from the Modern Maya of southern Mexico to Frank Gehry, from homelessness to legendary winemaker Peter Gago.

Demetrios is best known in the design world as director of the Eames Office and author of a few books on design, including An Eames Primer. Demetrios speaks frequently on his own work, scale, the work of American designers Charles and Ray Eames—and sometimes just good old-fashioned storytelling. He has given talks in 40 countries on 6 continents, including on the main stage of the legendary TED conference, Technology, Entertainment, Design, a four-day journey into the areas that are shaping our future. 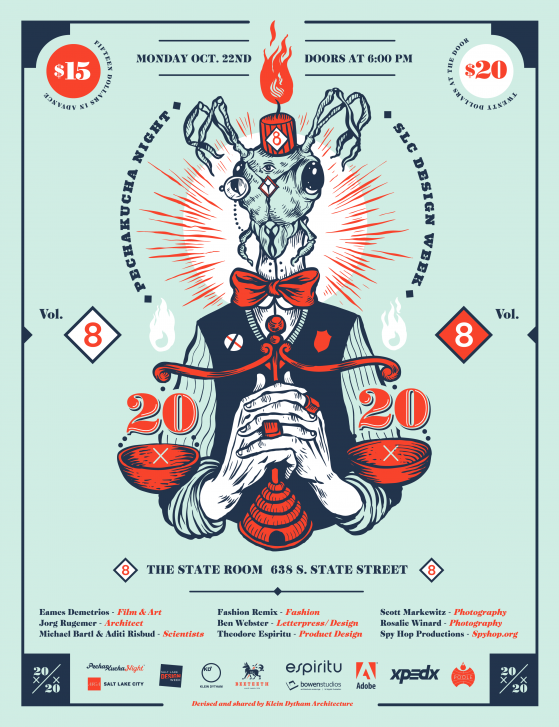