Patricia Kimball Seeks the Dangers of the Square 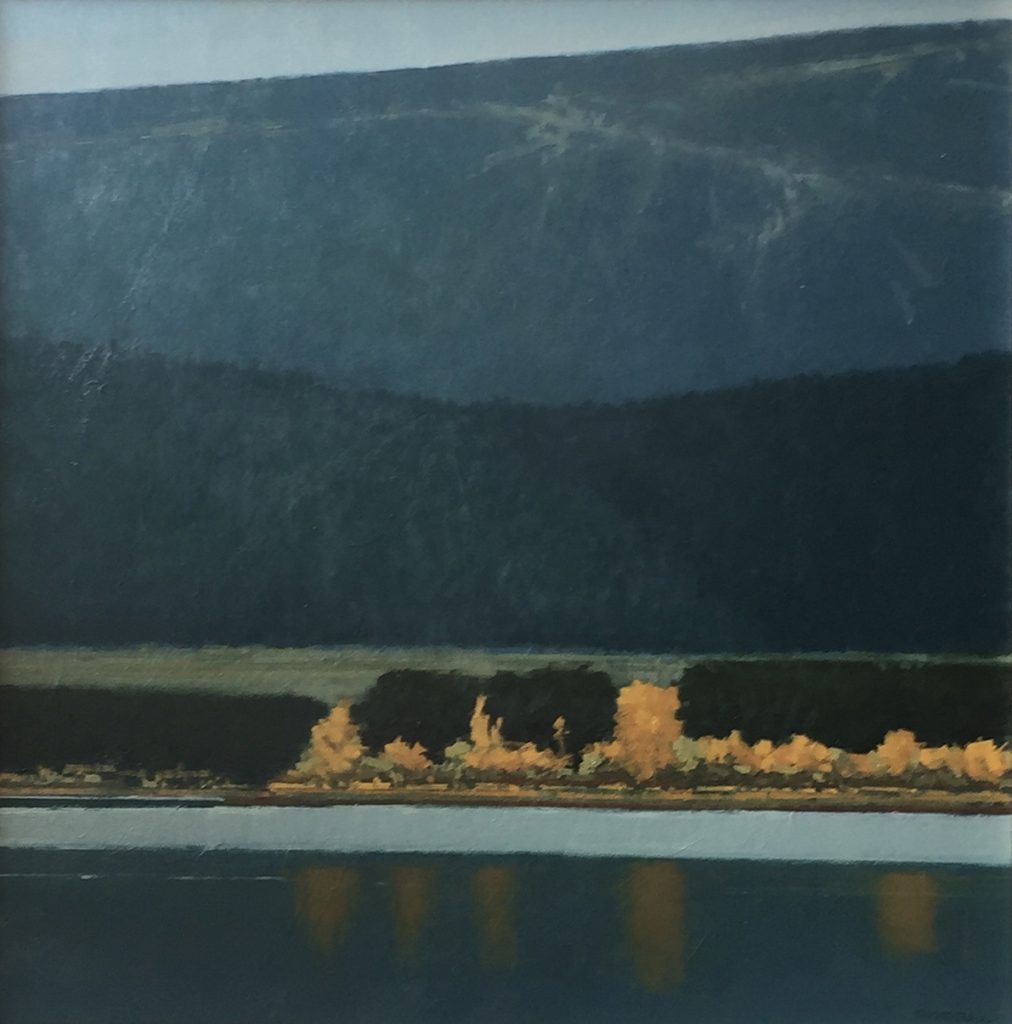 These paintings should not be as good as they are: with their muted palette, square format and generally flat lighting, they should be boring. But are not.

Patricia Kimball has never been a flashy painter, one who indulges in bright colors and virtuoso effects in her figure paintings and landscapes. The latter, in sizes measuring either 12” x 12” or 36” x 36,” are on view at Phillips Gallery in an exhibition that sees her paired with fiber artist Sharon Alderman. They depict not particularly astonishing scenes from Utah and Montana. Yet many of the paintings seem infused with an exciting energy, one that is never quite released. Call them tantric, if you will.

Kimball comes from the Helper school, the tradition of Utah painting that began at the University of Utah when Paul Davis and David Dornan taught there but takes its name from the Carbon County town where the professors set up their rural retreat and school after they left. A “school” implies a place and time but also some aesthetic commonality, and despite strong examples of individual style, the family resemblance — whether in subject matter, palette choice or paint application — was apparent at the Square One exhibit last year at Finch Lane Gallery. By design, all the works in that exhibit were square, a format Kimball has worked with frequently in the past and exclusively in this exhibition. It’s a dangerous format, the gravitational pull of the dead center threatening to wreck a composition. And Kimball’s subtle works rely on composition. They purposely flirt with its dangers. 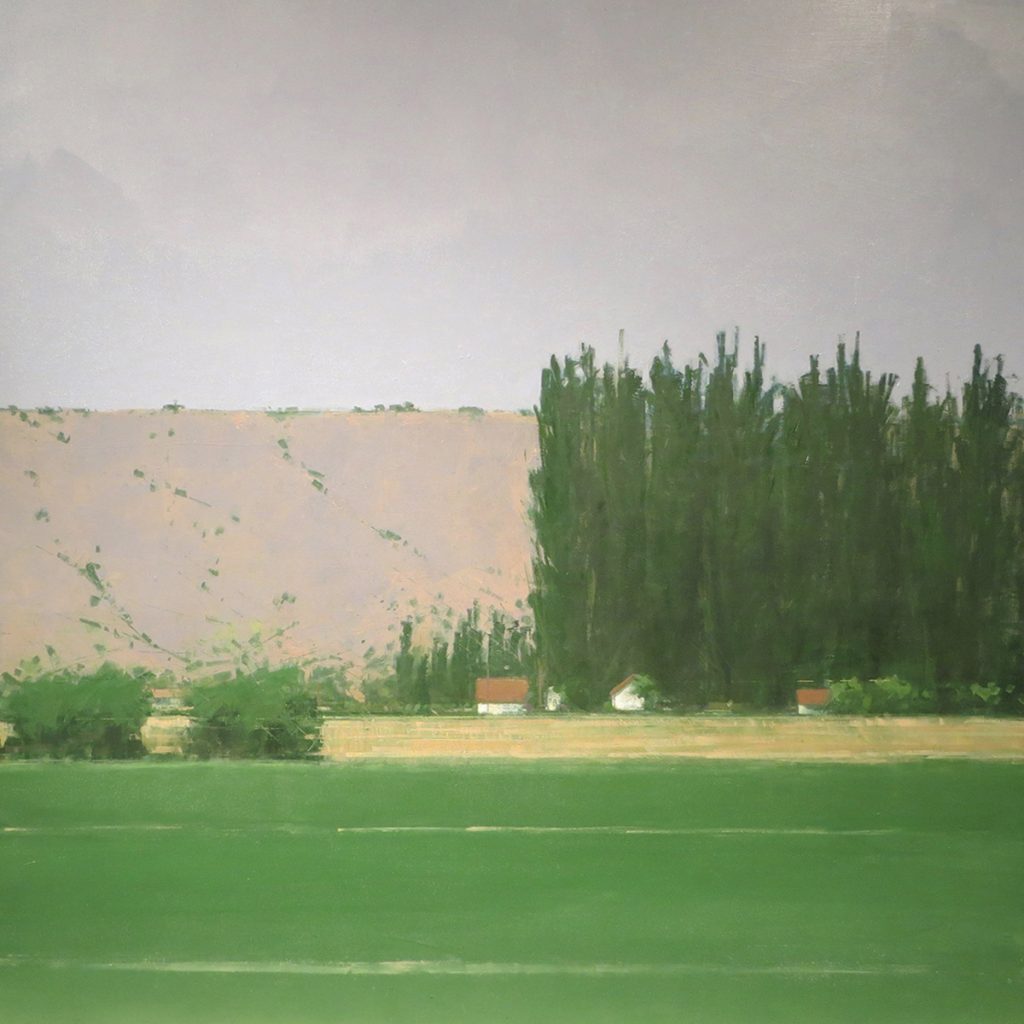 “Midday Already” depicts a rural scene one could easily find a mile in any direction from Helper’s Main Street. The canvas is divided into three, fairly equal horizontal bands: a nondescript gray sky fills the top, a stand of poplars and a taupe cliff the middle, while the foreground is occupied by fields, trees and houses. Small shifts around the horizontal centerline of the square add complexity to this basic composition: the poplars, visually taller, vertically dominate the cliff, but the longer cliffs push back with their horizontal insistence. The weight of two closer but smaller trees in the left foreground also serves to pull against the dominance of the heavy mass of poplars. Throw in three small structures, beginning at the center of the canvas and moving right, and you have a counterweight to this counterweight. Compositional strength like this, in which no one element is allowed to dominate or pull the attention in any one direction, is a hallmark of the Western tradition, one that is lost on many Sunday painters who have spent more time with the brush than the pencil. The inclusion of Kimball’s charcoal drawings — finished works in their own right, not simply preparatory studies — prove that in the old Renaissance debate between disegno and colore, Kimball certainly hasn’t forgotten the former.

The rule of thirds, once the privileged domain of photography and design students, has reached the lay photographer with the proliferation of tutorials provided for users of image-oriented social media sites. While this design principle has improved the work of many an amateur photographer, its ubiquity has also made the overall results boring, static. In Kimball’s “Wasatch Spring” and “Godly Domain I” the canvas is separated into thirds in a straightforward manner, no point of interest approaching anywhere near the center. But these are two of the more inert paintings in the exhibition. In “Where To,” Kimball uses a high horizon line and a motif that is slightly off center to create visual interest. One can imagine many an admirer capturing a similar shot for their Instagram feed. Compare this strategy to works like “Crazy for Cadmium” and “Real Desert Geo,” where the horizon is neither high nor low, but just above center. You can feel yourself wanting to push that line up or down; but it is that desire, that tension that promises to keep the works visually compelling. 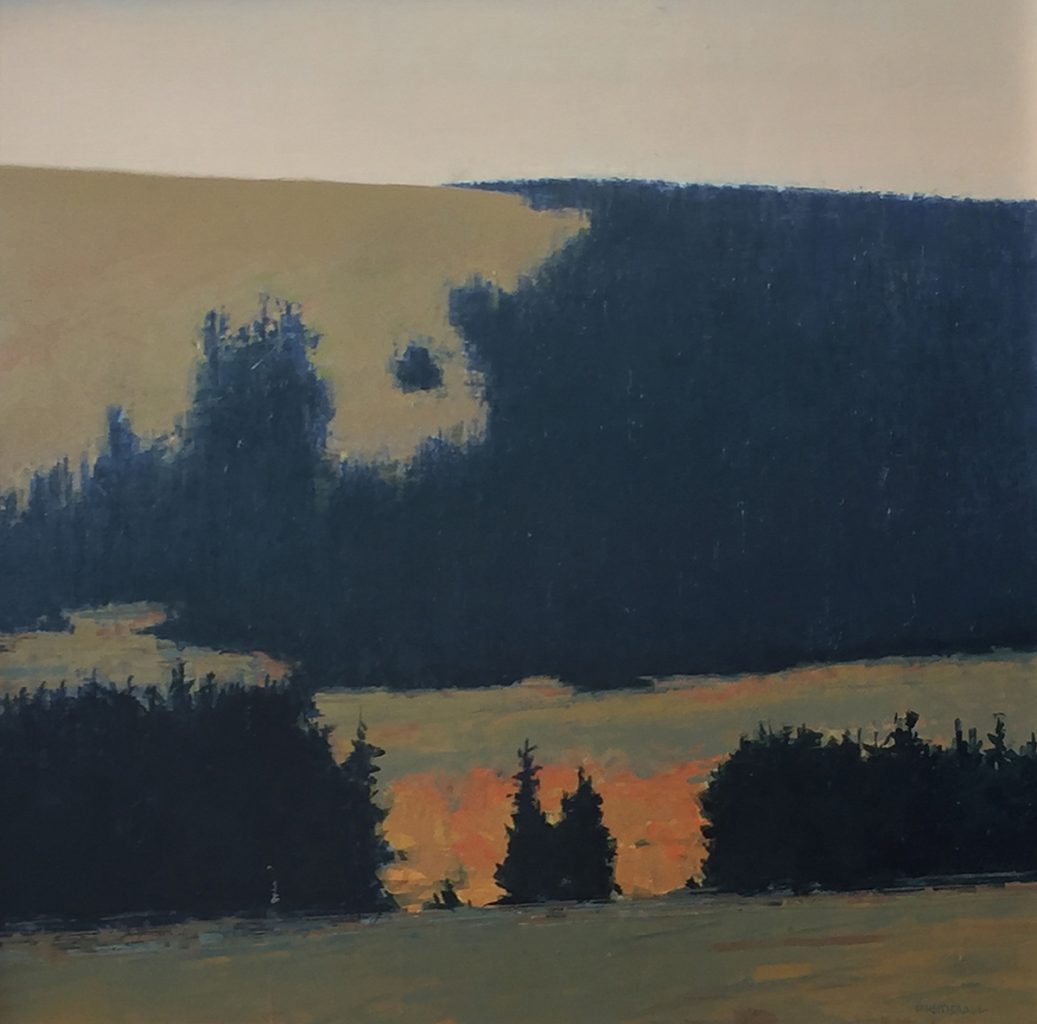 In “Wolf Creek” she is a good student of the rule. Her horizontal bands are of unequal heights, each placed in but not filling a third of the painting. But then, Kimball blatantly ignores the rule by placing two dark pines in the almost dead center of the bottom third. The “almost” being key. They have been shifted slightly to the right, while a third, much smaller form manages to pull the eye slightly to the left. Other elements, like the unequal height of the band of trees on either side and the play of positive and negative shapes in the hillside behind, keep the composition in movement around rather than glued to the centerline.

In “Off Season II,” what they eye senses — that the composition lands in the dead center of the square — Photoshop proves. Drag guidelines to the center of the image and you’ll see that the dark mass of trees just barely flirts with the right side of the painting, while the line in the hillside rises up and across to the center point. A line of reflected light on the water’s surface saves the painting from collapsing into this vortex. It comes close to paralleling the line in the hill, forming a visual entity that keeps the weight below the vertical center; and, coming from the right and stretching across the center, it saves the horizontal pull of the trees as well. This balancing effort is aided by many subtler elements: highlights accenting the slope of the hill, the faint trees on the hill’s crest, an additional, more muted reflection line in the water. Kimball is either really lucky with the scenes she chooses to paint, or very attentive to composing them. 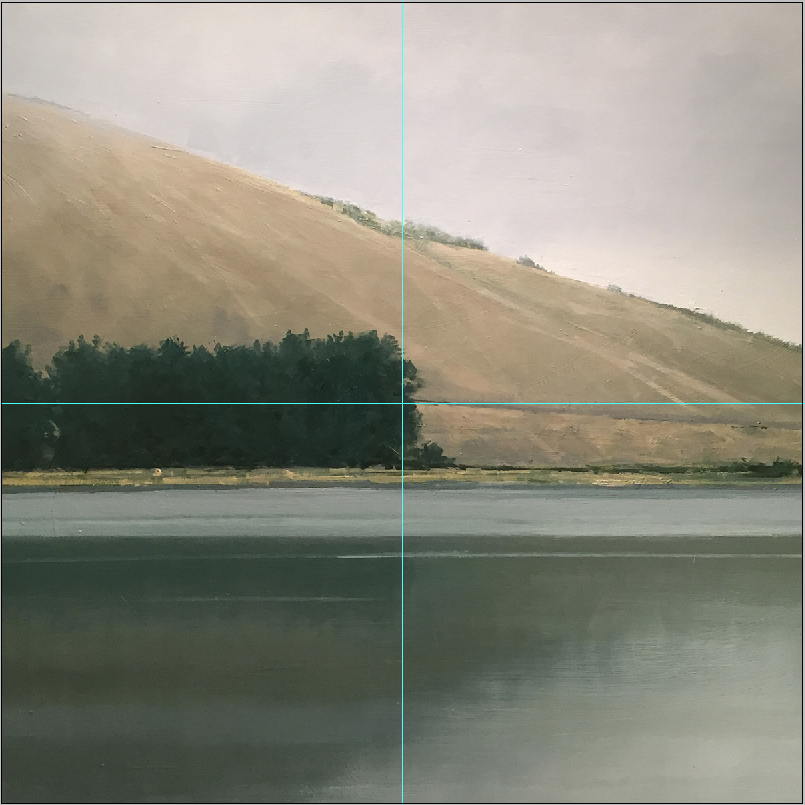 “Off Season II,” with guidelines showing the center point.

“Granite District,” one of two paintings that has no horizon line, making for an allover composition, is another work that challenges the center point. This is where two rocks point at each other and almost meet. Yet, adroit placement of small and large masses and the use of light and dark keep the composition from sinking into that center point. The work is so well composed, in fact, that you can divide the painting into quarters and each smaller composition is one that can stand on its own.

What does all this mean? Yes, attention to these formal concerns is the type that may excite the practitioner more than the patron. But there is a sort of truth in composition, not because it can be explained but because it can be felt. In these works, Kimball challenges the deadly center point of the square, like a daredevil pilot skirting the edges of a dangerous whirlpool. As calm and still as her works may appear, they also disturb, creating a dynamism that comes from always evading the sense of stasis they suggest they are approaching. 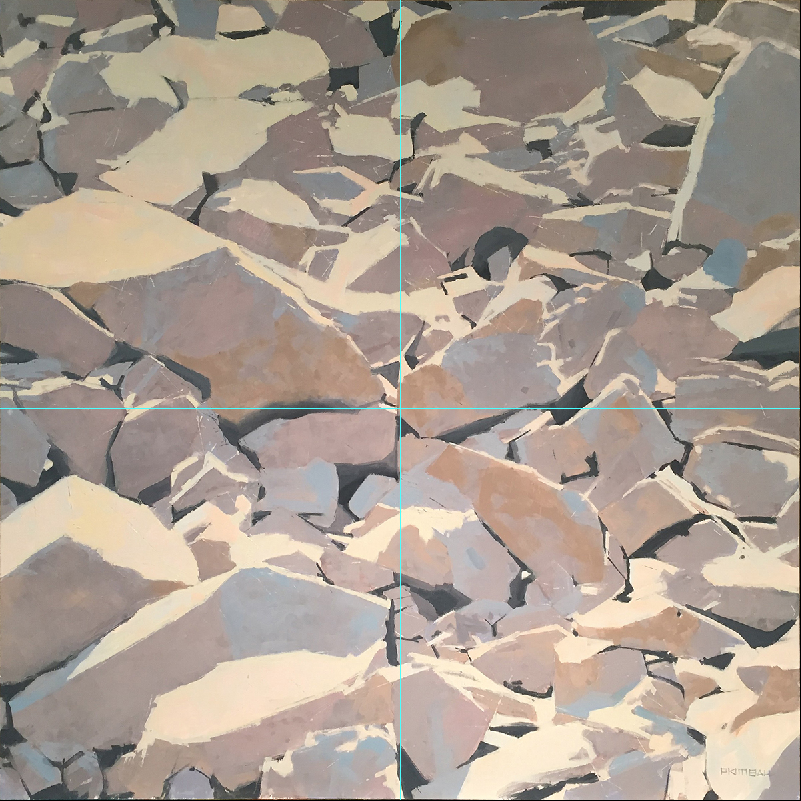