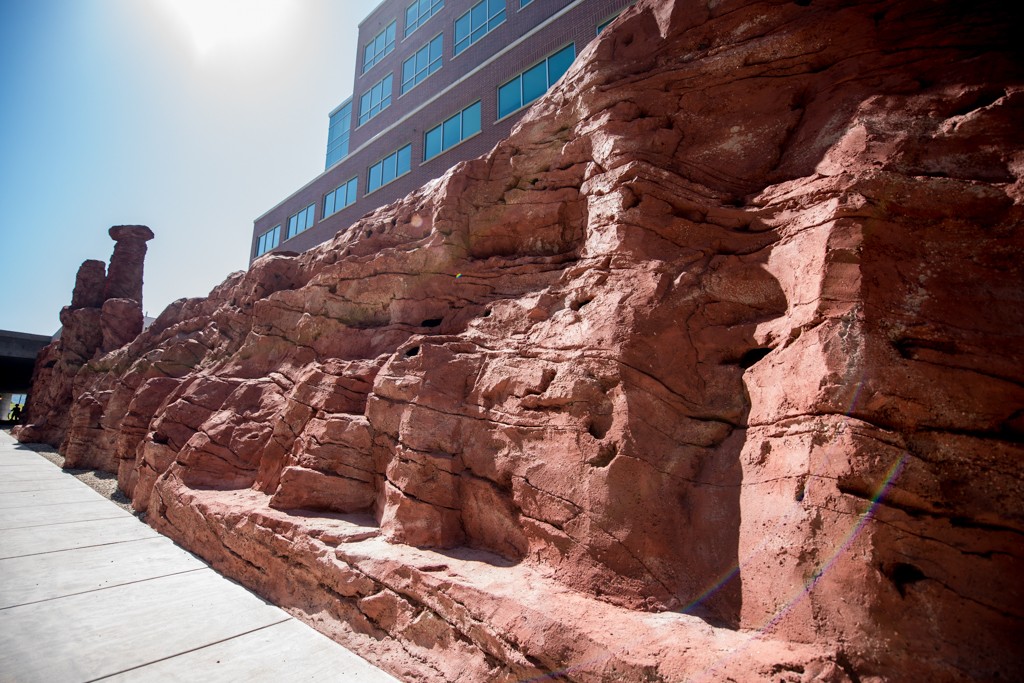 Public art matters.  That is the takeaway message from viewing Patricia Johanson’s monumental public artwork in Sugar House, Salt Lake City. It matters, and in the hands of a seasoned and passionate artist, it matters deeply and is successfully translated to the public. Johanson’s environmental work —with the Echo Canyon portion completed this June—not only addresses many audiences and their interests, it’s a work that takes us on a journey from the macrocosm of history and time to the microcosms embedded in her work; from natural beauty to environmental sustainability to cultural heritage.

Johanson has been working on this project since 2003, approached by regional landscape architect Steve Gilbert to create a work of public art in Sugar House based on her successful career as an artist working in environmental and public art. She applied for and won a National Endowment for the Arts competition to design a pedestrian corridor under 1300 East below 2100 South, and since 2003 has worked with numerous individuals, groups, and government agencies to realize her project, partially completed in June.

Johanson is internationally known as a successful environmental artist who melds human spaces and natural elements to create new landscapes benefiting both human and animal visitors. Her works have been commissioned nationally from New York (her home state) to California, and abroad in Brazil, Kenya, and Korea. Her ongoing work has landed her recognition through inclusion in key exhibitions (Ends of the Earth: Land Art to 1974, Museum of Contemporary Art, Los Angeles, and Haus der Kunst, Munich) and in competitions such as the NEA granted to her in 2003 to work in Salt Lake City.

Her legacy as an artist includes a rich history of personal and professional relationships developed since her years first at Bennington College in Vermont, then in New York City as she created work and continued her studies at both Hunter College, then at the City College of New York. Among her friends were the young artists Robert Smithson and Nancy Holt.

Johanson’s artistic contribution in a state where two of the most iconic works of Land art are situated is important. Her work forms a triangulation of space that draws an invisible line to the Spiral Jetty on the north shores of Great Salt Lake, to the barren western region of Sun Tunnels, back to Salt Lake City.  While each of these three artists brought similarities to their Utah works (specific environments as part of the work; visitor engagement through markers in the natural world; narrative established by place) there are obvious differences between Johanson’s work and those of Holt and Smithson, key being the busy urban environment Echo Canyon and Sego Lily inhabit and the unique narrative the works hinge upon.

As with most major projects—particularly one set in a populated intersection comprised of pedestrians, traffic, business, education, and a city park—Johanson’s project has spanned time and gone through many transitions. Yet, her commitment to the unique environment of place and to that place’s history, have remained.

“So what one may discover, moving from Hidden Hollow into ‘The Draw’ is a series of geological formations and sculptural landmarks that guided travelers along the Mormon-Hastings Trail.” ~ Patricia Johanson

Driving on 1300 East, below 2100 South, on the south side of the tall building identified as The Draw at Westminster College, you can see a flash of Johanson’s work: two vertical columns stand tall, signaling the site and a portion of the narrative that comprises the whole. To truly see her work, one would enter The Draw either by parking in Sugar House Park and walking under 1300 East through the recently constructed pedestrian corridor, or by parking near Hidden Hollow and walking east.

Surrounded by construction workers, Johanson and I walked down The Draw, stopping at the curve in the sidewalk that gave us a view of Hidden Hollow below us and, looking east, a view of Echo Canyon. It was there the tour began, and where I began to learn the history of place. We were standing on Parley’s Trail, which connects the Bonneville Shoreline Trail (east) to the Jordan River Parkway Trail (west). We were also standing on a trail that had flooded a short time after Johanson won her 2003 competition. As part of her initial design, she had planned on creating a berm to handle floodwaters; her plans were then modified to create a dam.

Standing on the spillway for the dam, the complexity of the engineering project was integrated into the beauty of the landscape. Boulders have been placed to direct floodwaters; nearby springs will become populated with frogs and toads and birds will find a new home.

Progressing east along Echo Canyon the redrock-colored canyon wall Johanson has created came alive as she spoke of the inspiration behind the work. Her love of American history, specifically the travels and travails of the pioneers who settled in the Salt Lake Valley, is writ large in the niches and crevasses of the wall. As she began to research the Mormon pioneers, she learned most were from cities, many travelers were from England, yet they upended their lives to cross the country and scale the Wasatch Mountains. As Johanson visited regional research repositories and scoured books, she learned about the environmental concerns the Mormons wrote about and followed.

Along Echo Canyon, Johanson pointed out her re-creation of “Cache Cave,” a place where pioneers would sign their names. As we walked farther east, the wall’s niches became deeper. One striking image on the wall represents the rattlesnake encountered by Erastus Snow in the advance party to move Brigham Young’s pioneers forward into the valley. The undulating wall with niches and a resting bench continue until we arrive at “The Witches,” the five monumental columns partly visible from 1300 East. As many Mormons traveled long hours and arrived during the dark of night, they needed geographic markers to signal resting spots. The weathered rock columns (“hoodoos”) in Echo Canyon were imagined by the Mormons to look like witches with bonnets.

By now, we’re next to the pedestrian passageway under 1300 East. Brigham Young and his team looked for coal along their journey and so the striations in the wall indicate coal seams, which continue under the tunnel. Glancing back at the wall, my imagination takes hold as I see the vision Johanson intends: the north side of the walkway will be tree lined, the wall will be inhabited by microcosms of flora and fauna in this urban environment. Looking east, this is the place where the visible, the first phase of Johanson’s work, dissolves into the invisible as we walk through the tunnel and enter Sugar House Park. This is where the unrealized part of her project, Sego Lily, hopefully will be constructed.

“The ‘Sego Lily’ is both a microcosm of the Salt Lake Valley, as well as a dam that will prevent catastrophic floods from overtopping the Sugar House Park detention basin and spilling out onto the highway.” ~ Patricia Johanson

Johanson’s vision for Sego Lily is as monumental as Echo Canyon, yet different in design and usage. The sego lily is Utah’s state flower, a symbol of the pioneers who, taking the advice of resident American Indians, ate the bulb of the lily to get through tough winters. As the pioneers dammed Parley’s Creek, they created irrigation for their crops. Thus, Johanson’s Sego Lily alludes to the first major control of water established in the Salt Lake Valley in the 1800s.

Sego Lily’s design includes three petals, designed to fit the scale of existing Sugar House Park, to be built of sculpted shotcrete and plantings so as to act as floodwalls in the event of future flooding. Designed for both people and water diversion, each petal addresses different uses: the north petal will represent Donner Hill, the first view the pioneers had of the Salt Lake Valley; the east petal will include a water feature and will serve agricultural purposes; the south petal incorporates amphitheater seating for school groups and a climbing wall.

The stem of the lily will parallel 1300 East as visitors walk north toward the dam (listed on the Utah Registry of Dams), or south toward the site of the future lily bulb. When standing at the bulb, one can look toward the Wasatch Mountains and see the terrain the pioneers travelled. The dam serves an environmental function, and in the future will divert floodwater from the detention basin in Sugar House Park down the lily’s stem, through its petals, through the pedestrian passage under 1300 East, down The Draw, and into Parley’s Creek in Hidden Hollow.

Completion of Sego Lily is hinged on successful fundraising from the private sector, managed by Parley’s Rails, Trails, and Tunnels (PRATT) Coalition. It is estimated that $2 million needs to be raised by November 2015 to complete the entirety of Johanson’s work. This time frame is crucial: when the grading of the dam was completed, the Utah State Dam Engineer agreed to a two-year time extension to complete a permanent dam for Sugar House Park. PRATT representatives are working to raise funds for Sego Lily so that Johanson’s design, rather than permanent turf reinforcement, will be created in the park. Several publications on Johanson’s work include drawings over the years for this project, notably the exhibition catalog A Field Guide to Patricia Johanson’s Works: Built, Proposed, Collected & Published (2012) and monograph Art and Survival: Patricia Johanson’s Environmental Projects (2006).

Infrastructure; water control; environment; art: there are many successful aspects of Echo Canyon and Sego Lily. The visual draw of pulling from one place to another, transposing specific narratives and geologic and geographic features, is masterful. Johanson’s research into a place where she has never lived, to find the potential in a work of art that mirrors our cultural history to us, is the sign of a consummate artist: the pioneers and settlers who altered the landscape in the 19th  century is skillfully reflected in her site-specific work. This history can be appreciated by all visitors through immersion in the work’s beauty and appreciation of its functionality. Our ability to literally see history embedded into the structures she has created reminds us of the importance of public art: it’s about our embodiment of place.

You can learn more about Patricia Johanson’s work at her website patriciajohanson.com.