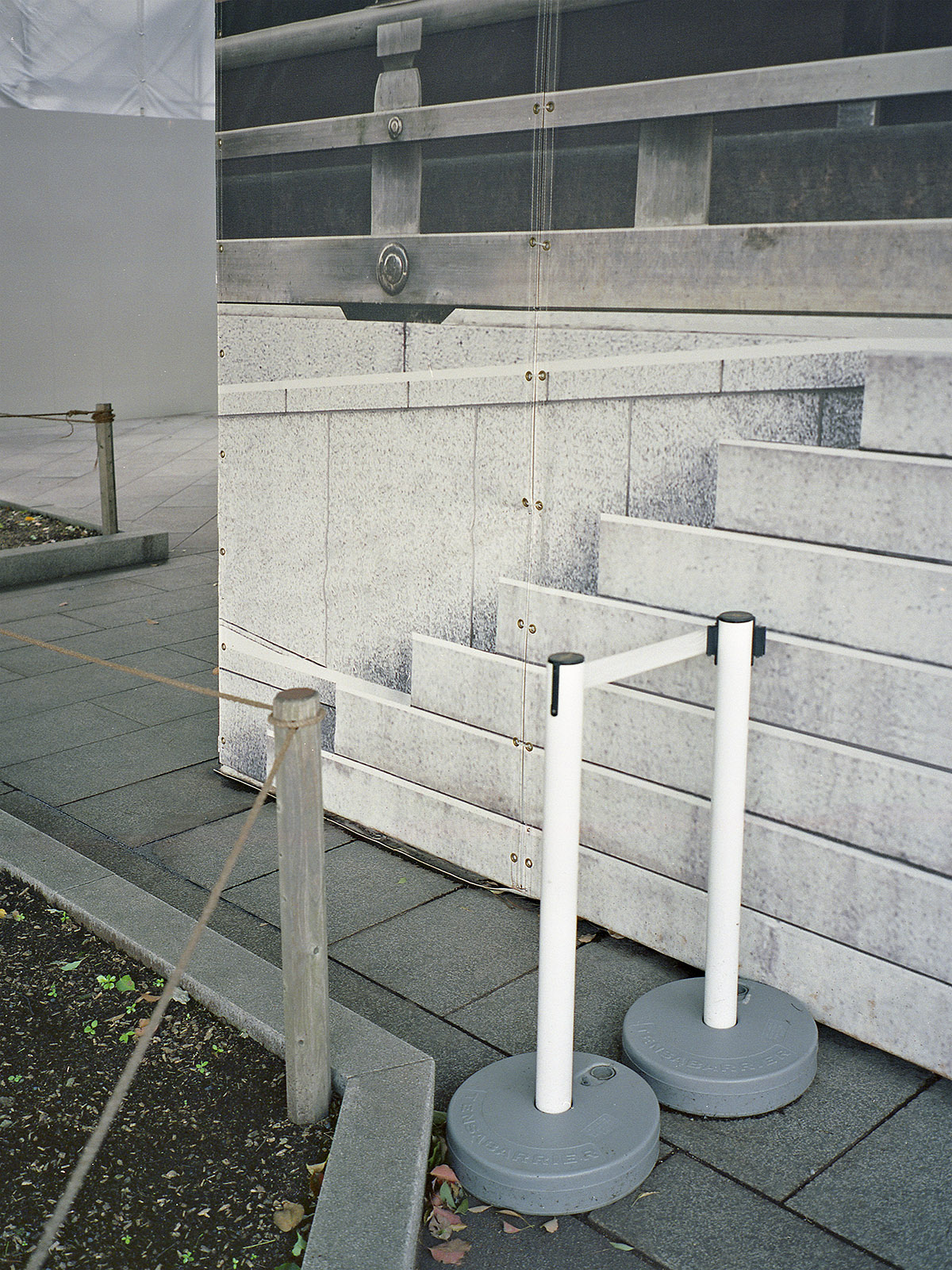 Attempts to gentrify south Provo have been quietly underway for decades. The area around 500 South just west of University Avenue is one of the few industrial areas from the early 20th century in Provo, and developers have recently started to capitalize on the industrial aesthetic fetish, turning former factories into reception halls and co-work spaces. Homes in the surrounding neighborhoods have slowly been purchased, quickly renovated, and flipped while new generic condos have been erected to alleviate the housing crunch. The Frontrunner now chugs through and sighs to a stop in south Provo a block away from Provo Studio, the site of the first exhibition by the curatorial collective working under the name PARC. Comprised of Tiana Birrell, Ron Linn, Art Morrill, and Cole Walker, PARC assembled a cohort of seventeen artists (including themselves) and six writers around the exhibition’s theme and title of dis/place.

Leaden galvanized-steel sheets clad the walls of the main gallery space that is the entry of Provo Studio. Unframed works on paper are gingerly adhered to the metal using neodymium magnets. The magnets are both a practical solution to temporarily affixing the work and a metaphor for the exhibition series of which this is the first. Titled MGNT (“magnet,” minus the vowels), this quarterly series brings together artists to highlight the unseen forces that attract them to one another, and in this case, issues of place. The title of this inaugural MGNT exhibition is obviously meant to be read as a fracturing and self-reflexive displacement of the word “displace” but also can be read as slang: “dis place,” as in “this place,” or “dis” meaning “insult.” All of these readings can be found in the varying work in the exhibition spaces.

Standouts from this well-populated show include Eric Edvalson’s unassuming photograph “Meiji Jingu” (2019), from his Meanderings series. The largely monochromatic photograph depicts a pair of stanchions huddled as closely together as their bases will allow, blocking a narrow path between an empty garden bed and a wall wrapped in a grommeted vinyl photo mural. The mural depicts a set of seven stone stair steps climbing up to a platform behind a wooden railing. The mural’s perspective is warped by the oblique angle at which it is photographed, creating a disorienting space that is made inaccessible by ad hoc fencing and the impossibility of entering the illusionistic space of the mural. Edvalson quietly celebrates these unintentional collaborations as different parties add elements to their built environment, resulting in quirky juxtapositions. 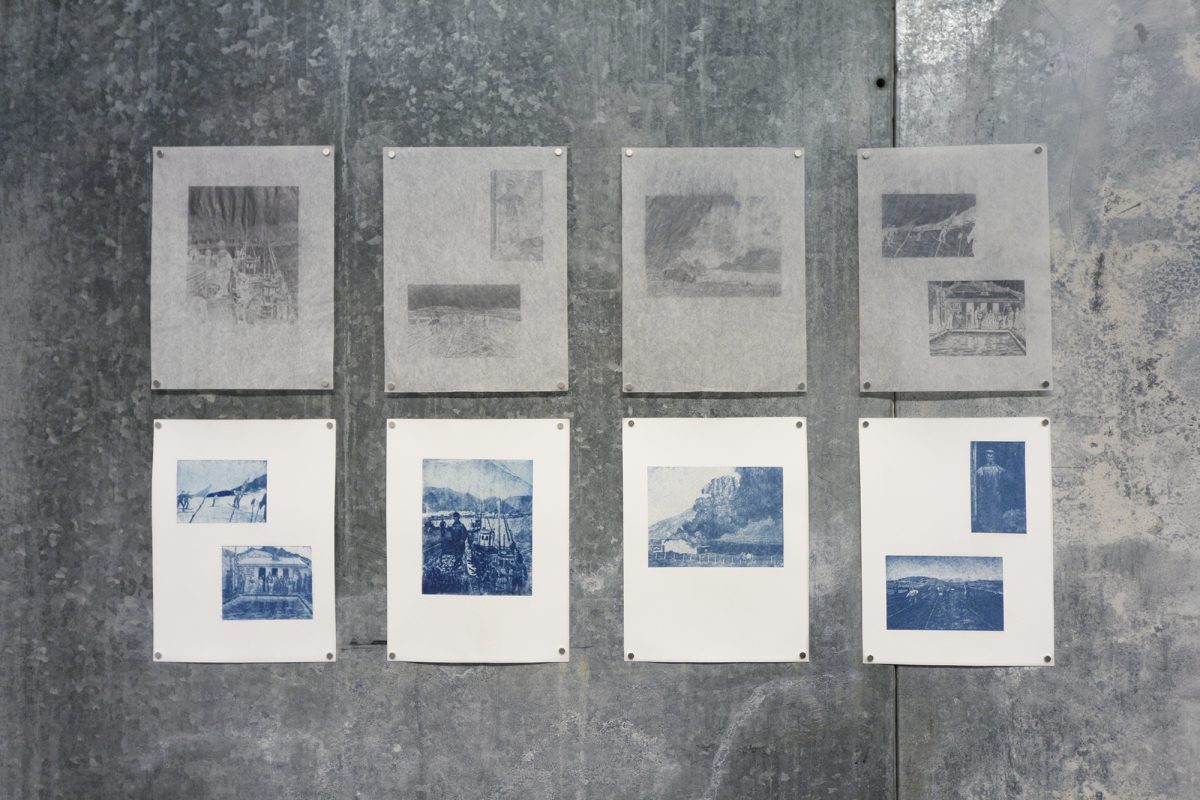 Ron Linn, “a far blue country i-iv,” 2019, graphite on tracing paper and cyanotypes on paper, courtesy of the artist.

Ron Linn’s understated graphite drawings on tracing paper of photo negatives read as a series of found imagery — children in thick wool sweaters loitering around a fishing dock, vintage alpine skiers, the start of a swimming race in a narrow swimming pool, a small rural structure belching thick smoke into the sky as the building burns. As negatives, the images can be hard to read. Linn has taken the drawn negatives and used them to create positive cyanotypes that are displayed below the graphite drawings, but not paired. The results are rich, Prussian blue photographic scenes that look akin to mezzotints or early 20th-century Pictorialist compositions. The photographic sensibility is moderated by the meticulous scribbles of the parent drawings. This translation from photo to drawing, and back to a photographic process reflects the fleeting relationships to places visited and the evolving and devolving nature of memory of those places.

Jaime Trinidad’s 3D-printed sculptures graft together classical Western art icons with sculptural forms of Trinidad’s native Mexico. In “Small Colossal Head of a WESTERN Youth” (2019), the artist has taken the marble “Fragmentary Colossal Head of a Youth” from the second century BCE and completed the missing upper portion of the head with an Olmec stone sculpture known as “San Lorenzo Colossal Head 4,” dating to before 900 BCE. Both of these “colossal” works are about the scale of tchotchkes picked up in roadside tourist markets around Italy and Greece. It is common to view a fractured Greek sculpture and wonder what is missing. Trinidad’s clever response is to fill that negative space with what is missing in most canonized art history. 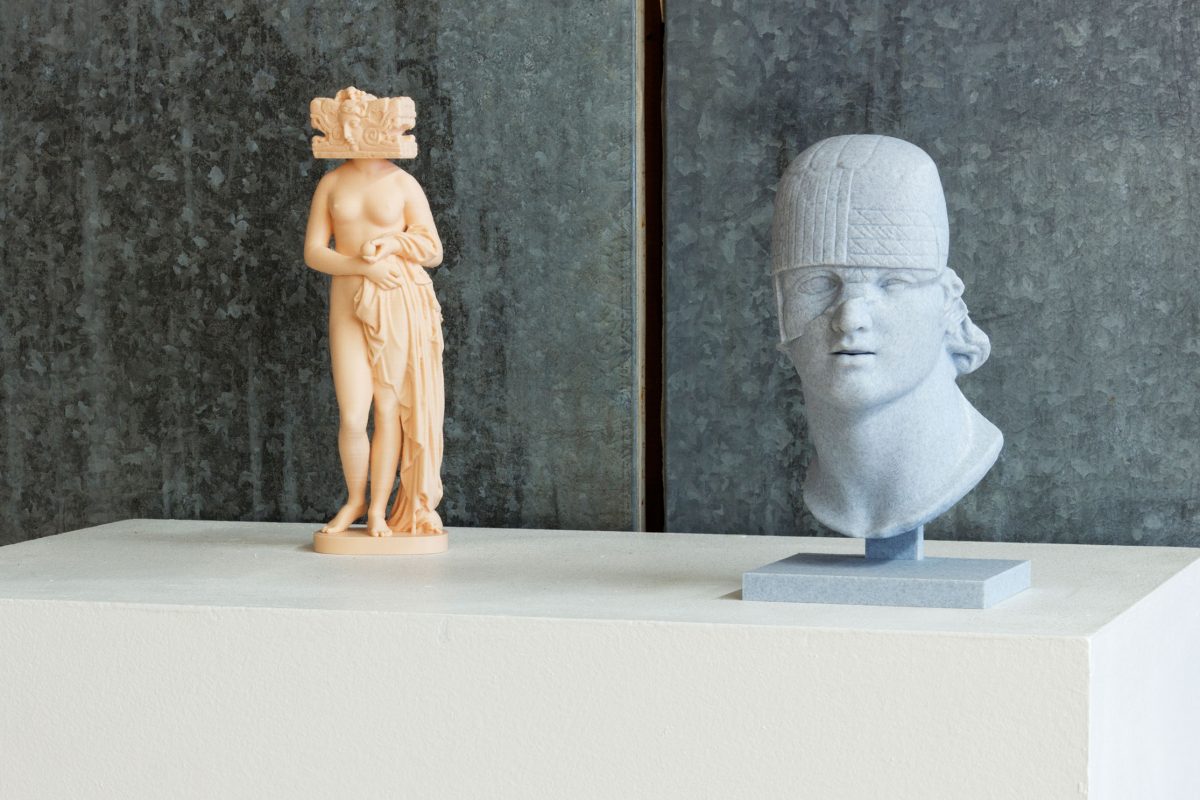 Most of the work in the exhibition is small and physically unassuming, which is to be expected given the modest rooms. However, Kelsey Harrison received the lion’s share of the exhibition space, occupying one-third of an adjacent studio/gallery. This work includes a modular interactive sculpture called “Luxury My Way” and two lighted signs resting on an adjacent wall spelling out the titles of the works, “Repeatable Experience” and “Limited Options.” “Luxury My Way” is composed of a set of minimalist forms bearing postmodern ornamentation. The styles and color schemes of these building blocks are taken from new construction going up around Salt Lake City and other areas around the West. Each piece quotes the earth-tone architecture of a storage space, new metal-wrapped condominiums (like the complex neighboring the exhibition), or other similarly generic buildings that utilize a late Modernist aesthetic solely because it allows the owners to be cheap. Visitors are welcome to stack the pieces to create their own bland, khaki, mid-sized Hell.

The adjacent glowing signage borrows the typography habitually found on a real estate office or nail salon and declares exactly what the artist sees within these generic spaces and businesses: “Repeatable Experience” and “Limited Options.” The signs themselves were cut from the walls of Nox Contemporary where the work was first exhibited last year. Since they were built directly into the wall, the walls themselves were displaced to their new temporary home in Provo Studio.

dis/place is a smart first effort that shows these artist-curators working through ideas and democratic collectivism. At times, the impulse to include more artists for more vantages of the curatorial theme results in a less focused experience with some timid, small objects. Since PARC declares that their future endeavors will be nomadic, I hope to see them address the sites of the projects more directly — and I would have especially expected that to be more prevalent in an exhibition about displacement staged in a quickly gentrifying area. The group’s bravado is to be commended given the paucity of established contemporary art venues in the state, let alone Utah County, but I am heartened by newcomers PARC, PAL gallery, The Open Room, and other fledgling artist-driven projects. I look forward to them growing, maturing, and developing their voices. 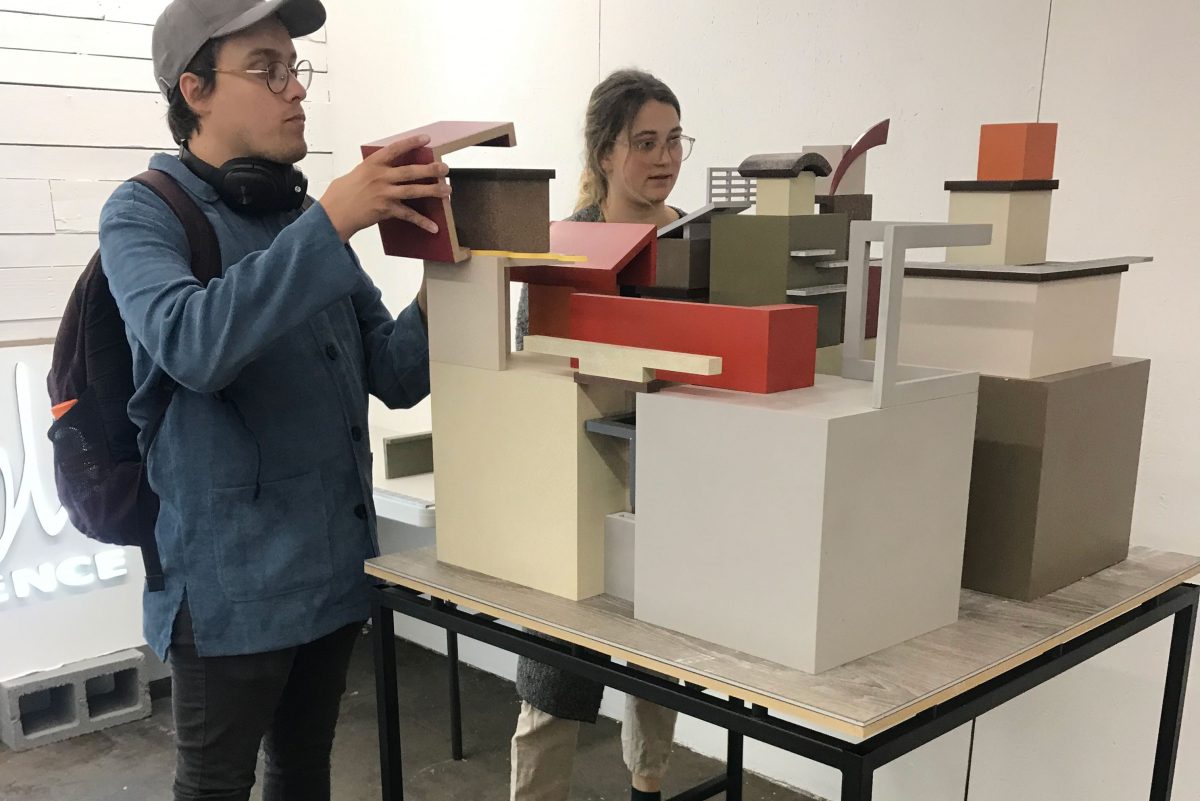 dis/place, curated by PARC at Provo Studio, through Dec. 20. By appointment only.