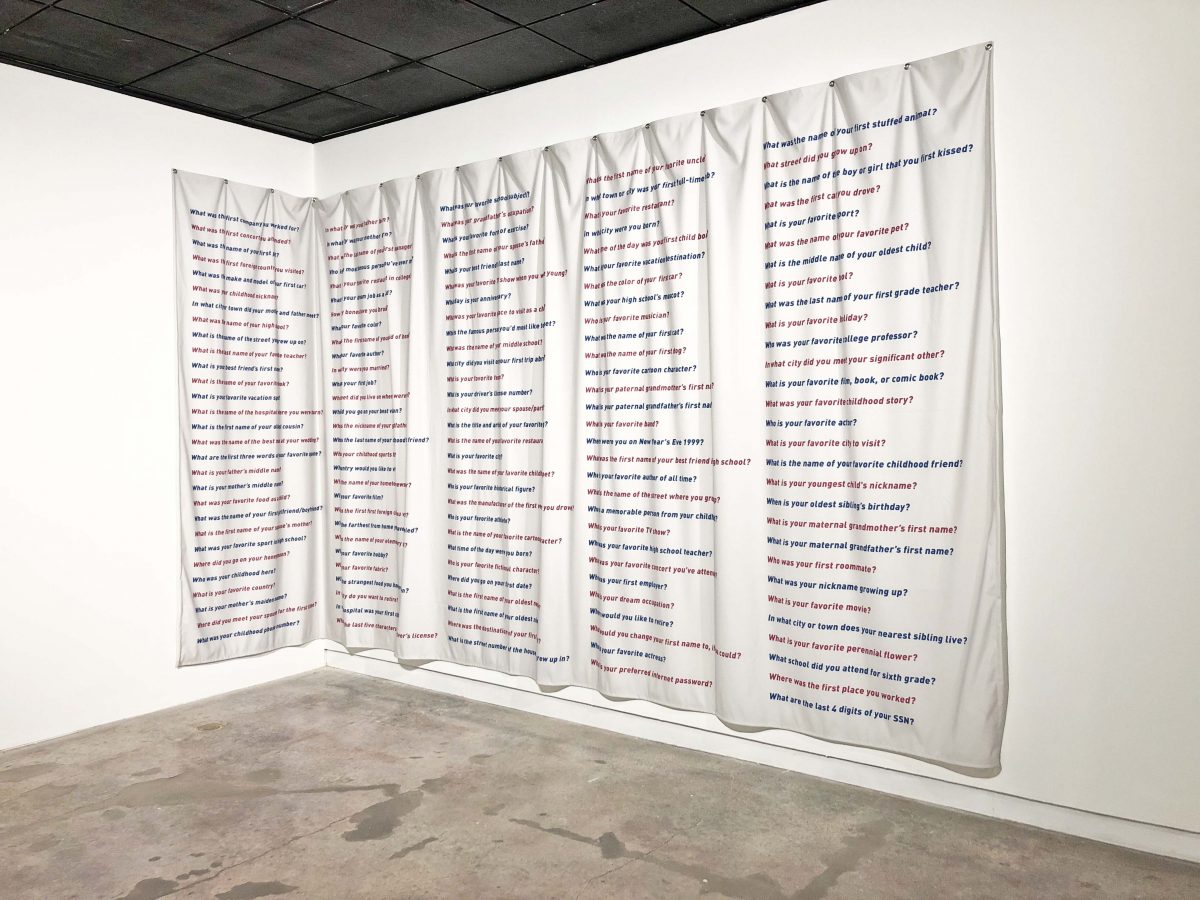 [dropcap]Reflected[/dropcap] subway systems, upside-down metropoli, bomb threat questionnaires—these are just a few of the elements at play in Daniel Everett’s Security Questions, currently at the Utah Museum of Contemporary Art. The exhibition includes a range of media, from looping videos to installations that, according to Everett, “address the divide between the complexity of a person, a situation or nature itself, and the systems we use to organize and assess them.” To be sure, many of the works provide insight into the price a paranoid society pays for security, at the cost of the individual. However, in addition to asking if the complexity of an individual human being can be computed, if it can be reduced to an algorithm, Everett also seems to be exploring the individual’s complicity in creating the “secure” but stark and numerical world we live in.

Everett’s piece “Security Questions,” in which the artist has created a tapestry of personal identification questions as a dye sublimation print on fabric, provides both a focal point for the exhibition as well as its title. It is the only piece of its kind in the show, highlighting the significance of the medium and the work itself.. The concept of a security blanket comes to mind, but this industrial material is the last thing you’d want to cuddle up with. The purpose of Everett’s security “blanket” has moved beyond the preservation of comfort and instead represents the normalization of paranoia. The questions themselves, printed against the gray background, invite viewers to think about the unsettling banality of the answers: “What is your mother’s maiden name? What was the name of your childhood best friend? What are the last four digits of your social security number?” At first it may seem like computational small talk. In a human-to-human interaction, the intent of making such inquiries would be to connect. To an indifferent security system, however, the data is used to protect. The questions Everett has chosen to display prompt us to consider what specific information we attempt to defend and what that says about our priorities as a society — bank account numbers, not grandma’s favorite family recipes, are what we guard the most and yet they probably say the least about us. 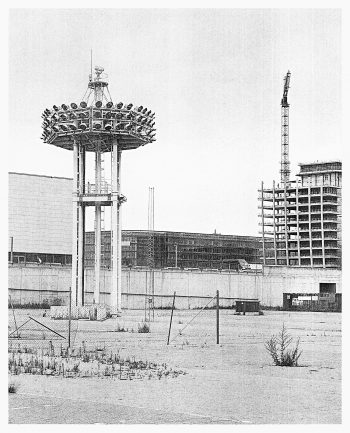 This initial piece leads to others of a more sinister nature. In “Tower IV,” an inkjet print of a large structure located at the center of an abandoned penitentiary, barren ground and barbed wire surround an ominous tower, creating an eerie and unsettling sensation in the viewer. The architecture is a direct allusion to the prison architecture first outlined by Jeremy Bentham in the late 18th century and later discussed in detail by Michel Foucault in Discipline and Punish: a central tower located in the middle of a circular prison would allows a single observer a 360- degree vantage point to monitor inmates. Whether or not the tower is occupied is irrelevant; it is the potential of always being watched that keeps chaos in check.

“Tower IV” sets the tone for corresponding works like “Parking,” a vinyl print of a multilevel parking garage, complete with numbered spaces and a sampling of black, silver, and white vehicles, and “Correct Angles,” which hangs opposite it, a group of nine inkjet prints showing groups of security cameras. Although the viewer understands that these lenses are only a photographic representation, they nevertheless conjure unsettling feelings. What began with Bentham as a method of control, directed at the “other” in a distinct setting, has become technologically outsourced and a ubiquitous part of our everyday lives. These three works challenge our very understanding of security. Do we feel secure knowing that there are places where those who have been penalized are watched or do we ourselves feel haunted by the eyes on us everywhere we go, from parking garages to the post office? 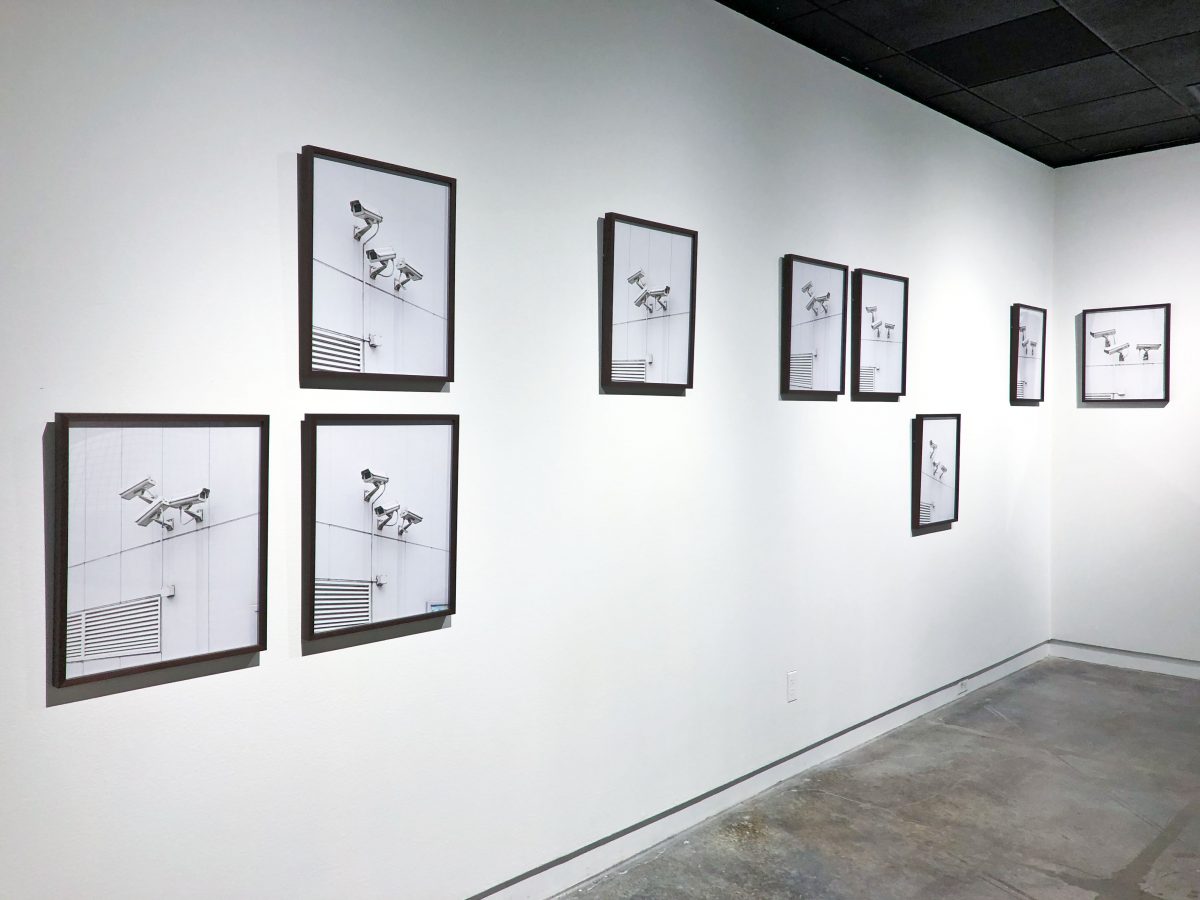 While there are various works throughout the exhibit that fuel Everett’s discussion and challenge our assumptions about systematic safety, the works are unified by the installation of two parallel pieces: “Billboard I” and “Billboard II” are each mounted to a wire machine guard panel and each incorporates an image of a cityscape photographed at a dramatic angle and then displayed upside down–possibly an allusion to the display practices of Georg Baselitz. Since there is neither ground nor sky to orient the viewer, the eye is lost in a topsy-turvy urban landscape as the viewer frantically searches for a part of the picture that can be optically understood. In the upper right corner, a blank billboard has been overlaid right-side up. While the exhibition engages with the relationship between the human element and technological systems, Everett’s “Billboards” offer insight into ways we can respond. “Billboard II” shows a city that is in the process of being built, a reminder that we are the ones who are creating the system — we can’t avoid it; we did it to ourselves. But the blank billboard itself—which is right- side up—allows us a certain designated space to work within the system. 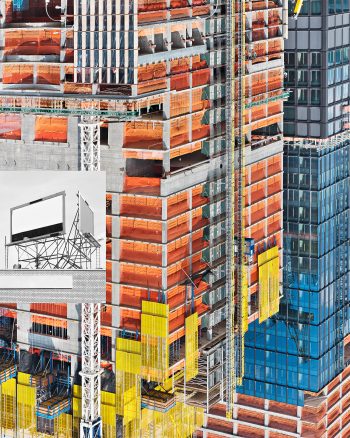 In an exhibition with a strong current of irony, Everett brilliantly — but accessibly — exposes and complicates our relationship with security — with systems that ask for personal information in order to protect personal information, which invade our privacy in order to protect it. While the security systems we have created may appear cold, technologically impersonal and reductive, at their root it is our humanity, our desire for safety and security, that gives rise to them. We have only ourselves to blame.