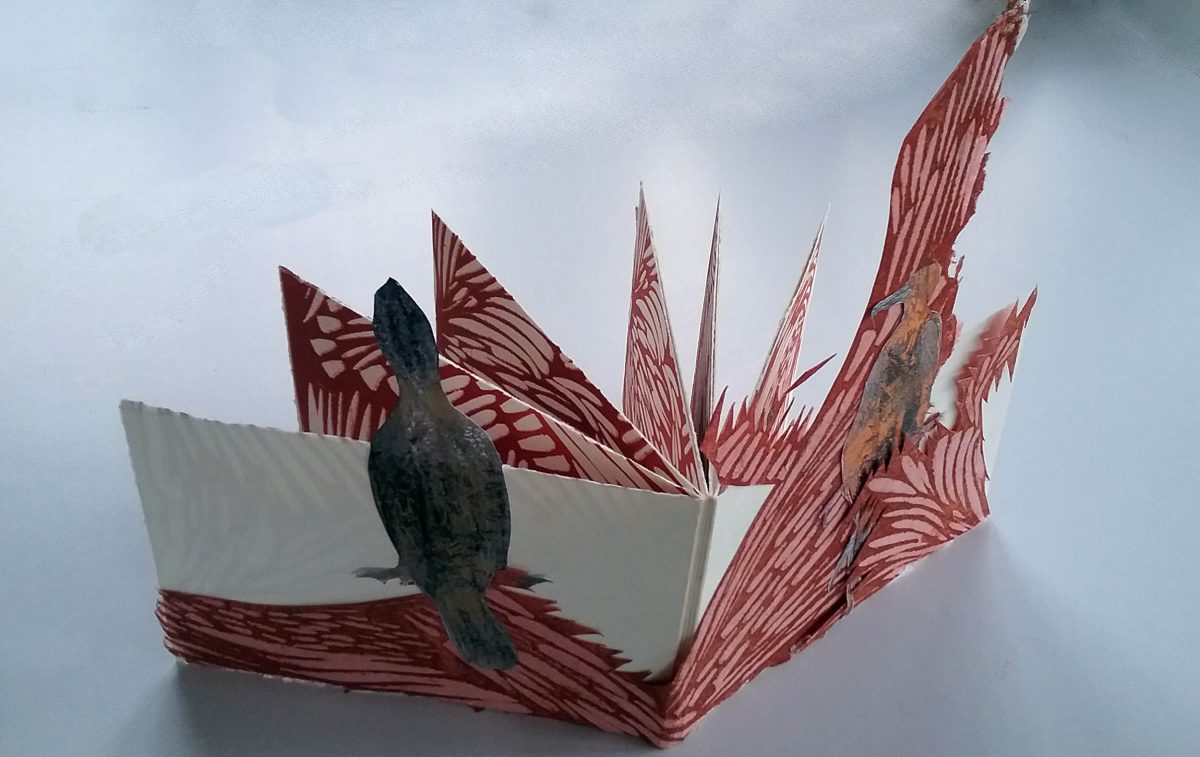 Every year the Salt Lake City art scene — sometimes lamented as pale, even provincial, compared to sister hipster cities Portland and Austin — brightens with another interesting national show or event like the University of Utah’s PaperWest. In its second iteration, the biannual show at the Gittins Gallery at the U brings together decorated national artists. This tour de force show, made up of pieces with, on, or otherwise using paper was juried by Judith K. Brodsky, a noted historian of paper art who taught at Rutgers, the State University of New Jersey. It displays a vibrant selection of contemporary art, one which Brodsky says made her “come away with [a] firm belief that the visual arts in the United States are thriving and are in a state of excellence.”

At the exhibit’s reception on October 9, professors and students from the College of Fine Arts roamed the gallery floor in equal measure, forming eclectically-dressed clusters holding cups, chatting, and looking at the works. With a pleasant ambient chatter, the evening was warm, welcoming, and served up art both interesting and sobering. 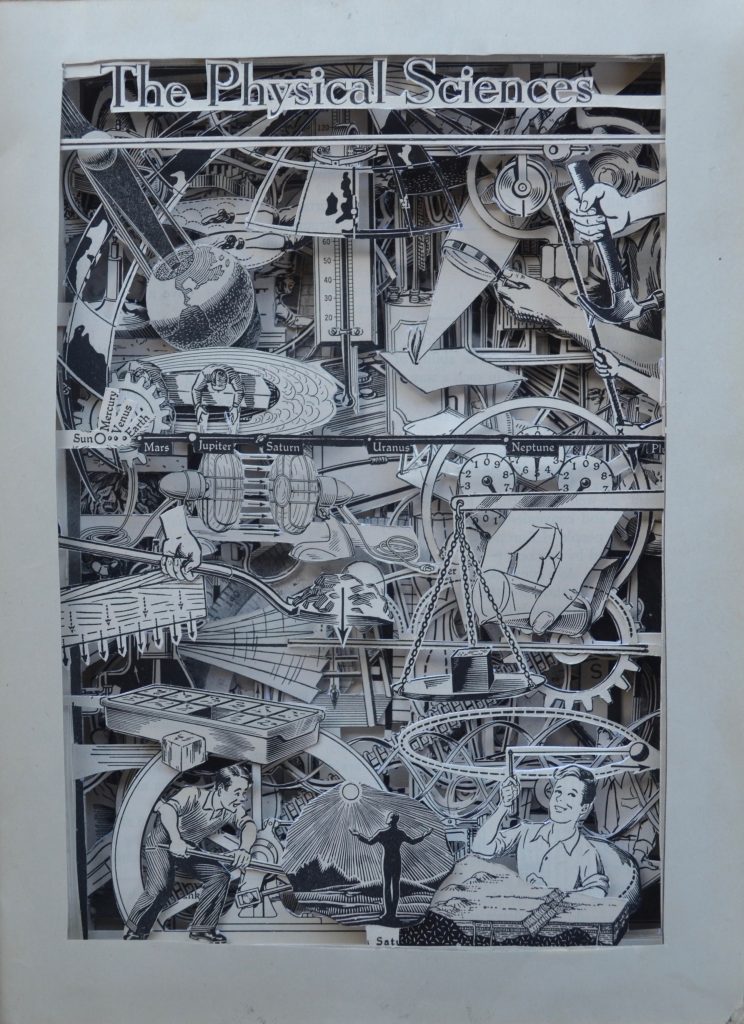 The exhibition features mostly 2-D works, but several 3-D sculptural pieces snake through the center of the space. The room’s interesting layout and curatorial choices were made by Brodsky and curator Justin Diggle, a professor of printmaking at the U. Brodsky, who admitted she has never had much to do with the West before now said, “Paring down the work I liked to the number that would fit in the gallery was difficult.” And, in fact, the airy Alvin Gittens Gallery, with aesthetically-pleasing high ceilings but a limited amount of wall space, made the number of works around the room less in number than many contemporary art shows in the valley. This gave an opportunity to pay attention to the small details of technique in each.

Some of the examples of novel use of paper were found in 3-D pieces like “The Physical Sciences” by Ben DiNino, Sarah Fukami’s “03773D (Fukuda Kay) II” and “Empty Nest” by Victoria Tasch. The first is an altered book, with delicately-layered illustrations of people and objects related to physical science pushing up from the frame-made of the edges of the book. The details are fine and it’s difficult to not lean in as close as you can: several patrons gathered looking at the book, pointing out its small details, including a drawn cog and ice tray. In her work, Fukami uses screen printing and laser cutting to juxtapose the black-and-white photo of a Japanese-American cadet nurse taken by Ansel Adams in a World War II internment camp with pink flowers and numbers. Tasch’s “Empty Nest” is a small book made from relief and hot foil prints, a process where heat and pressure are used to bond metal dies and thin foils. The red-and-pink design is the stylized bark of a tree with a yellow-and-brown bird perched in front. 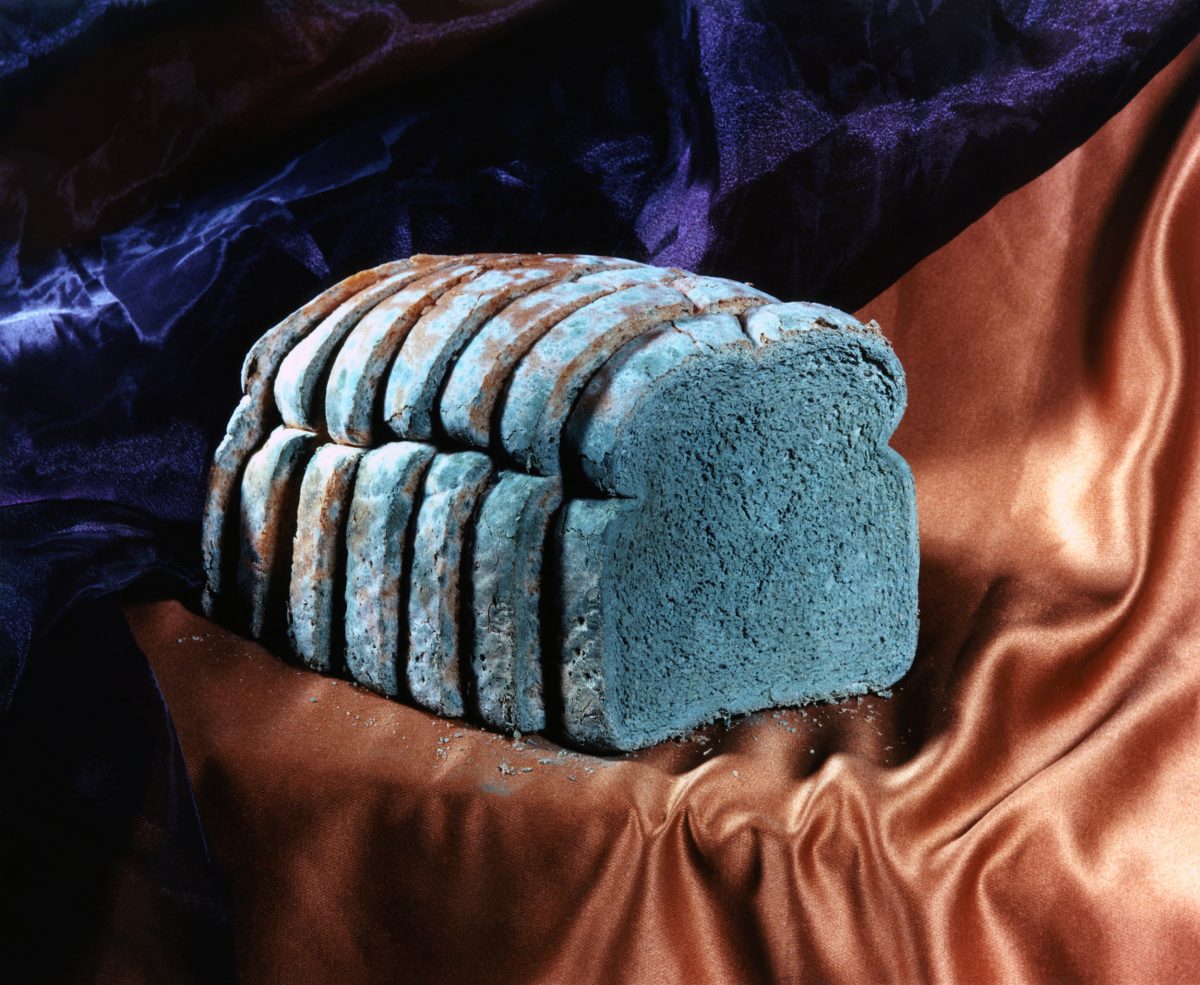 These pieces gleamed from their spaces on plinths or hanging on the bright white walls while on the other side of the room, Ashley Miller’s “Moldy Bread” attracted a crowd of attentive art lovers. The colorful and wacky piece, which layers coupons and newspaper ad cutouts with a large photo of blue-green, moldy American bread was a crowd favorite. It represents a good combination of digital photography and other paper types. (In fact, there were only two photographs in the room, with the majority of artists using paper as a physical medium in itself.) 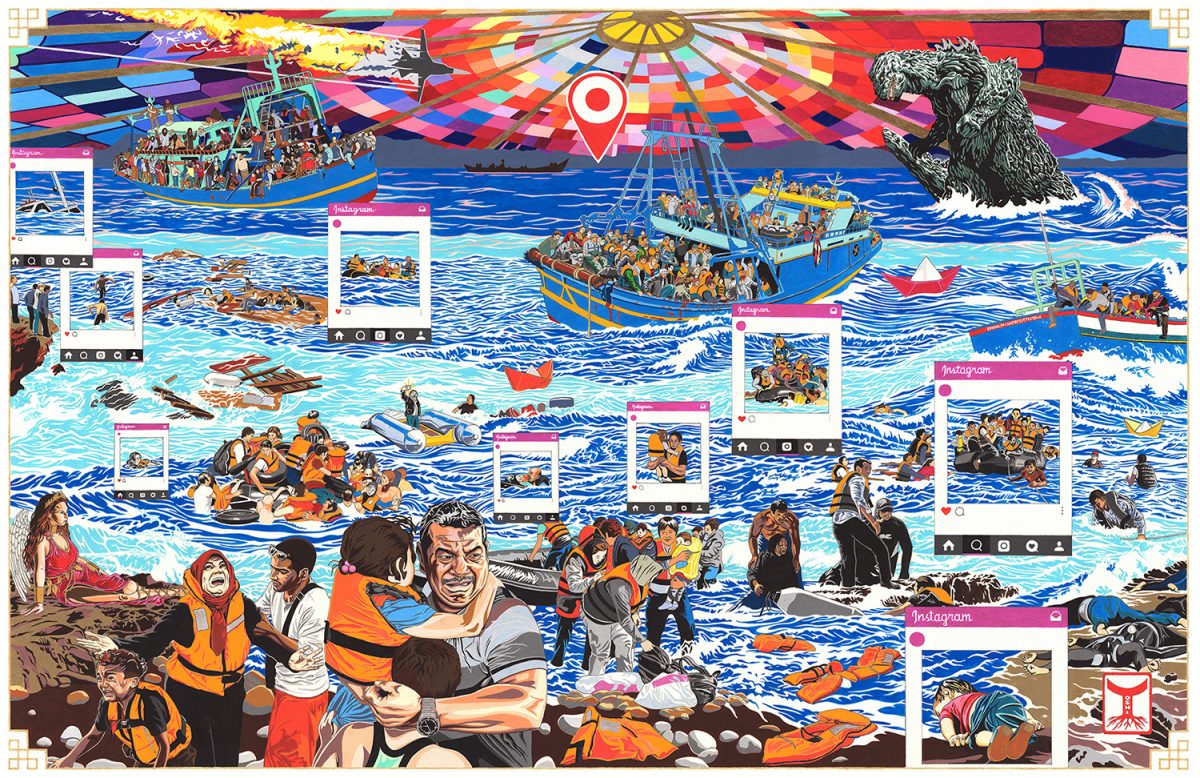 Political messages were a noteworthy element of a few of the pieces, often with an absurd and darkly comedic take. Kevin Campbell’s “Stretch” is a picture of a person in a sleeping bag laying on a city bench. The vibrant print looks like a daily commute in New York, San Francisco, or even Salt Lake City: people sleeping and dying on the side of the road. Jave Yoshimoto’s “Incandescent Metatonia” shows refugees in boats and bodies washing up on shore, with Instagram frames around pieces of the visual narrative, little hearts in the left corners. “Dangers to the North Atlantic Right Whale” by Jared Barbick shows a whale in a goldfish bowl, of all delightful things. The candles at the top make the whole composition look like a kind of prayer for the future of biodiversity on Earth. “Melancholic in a fun way” is one way to describe some of these groupings of commentary on the state of the world, filled as it is with miseries we struggle to know how to alleviate or ”keep on our radar” in a busy life. 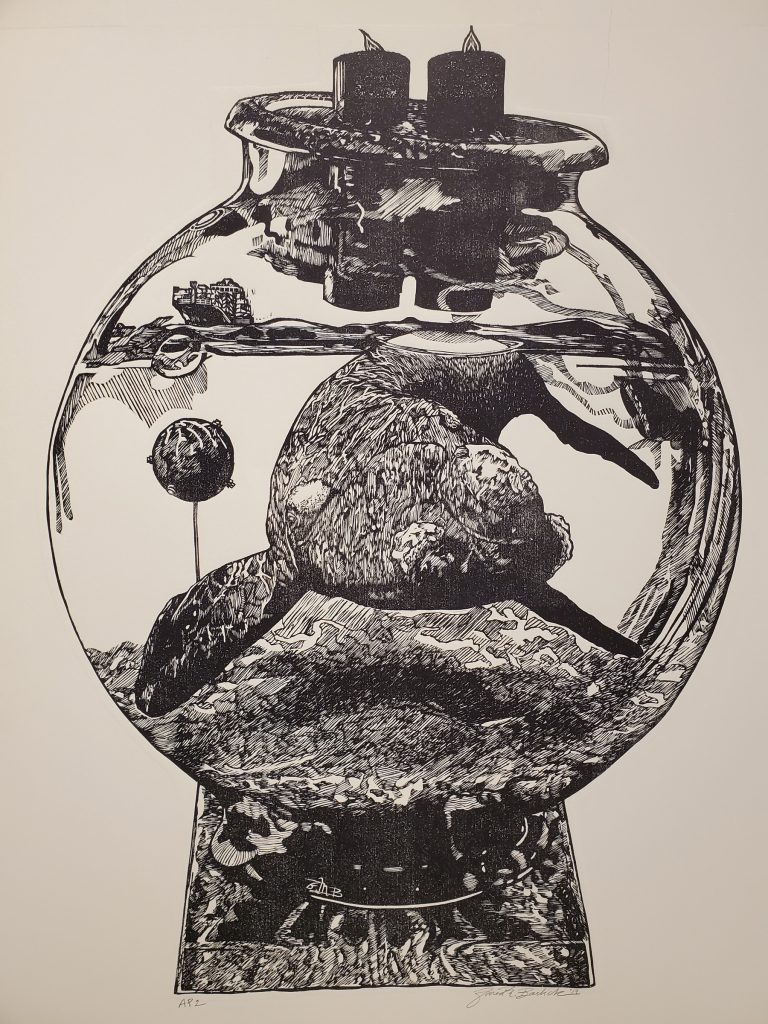 One more piece that stands out in the exhibition is Paul Young’s “Ogre.” This Sumi ink collage looks particularly snazzy in the midcentury room, nestled as it is in the Art History Department’s stunning glass and concrete, industrial trappings. “Ogre” is a creature made of bright layered boxes of color. At the bottom is a black square, with an orange and black-ink “foot” overlapping. The body of the boxy figure is yellow and black, with a dash of red in two protrusions from the head. 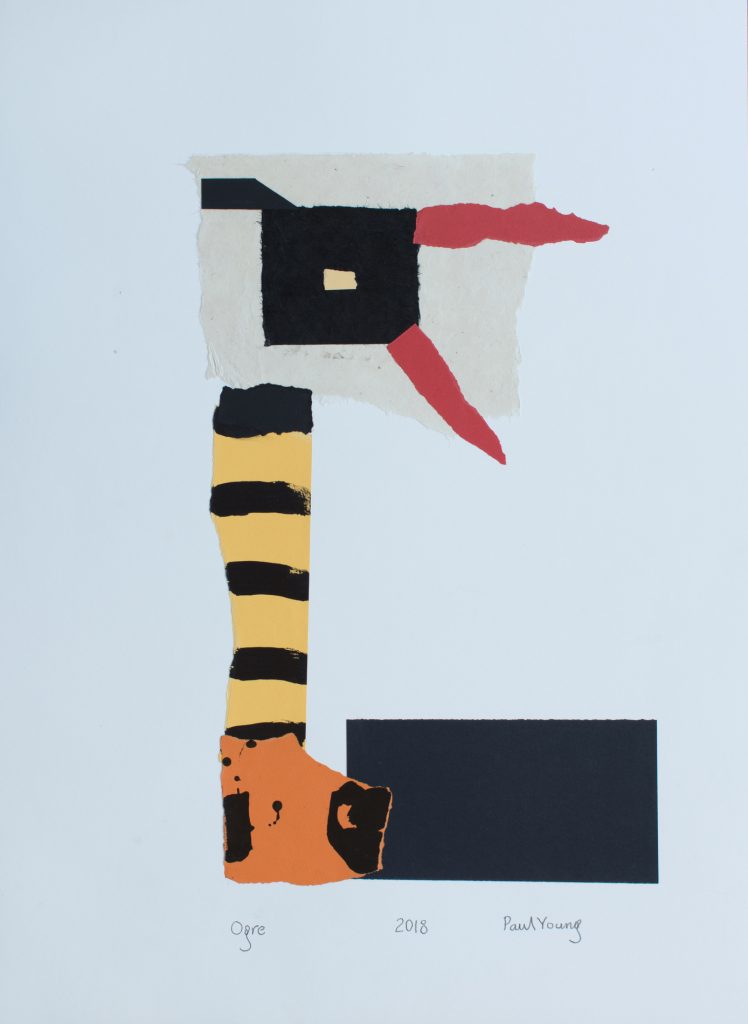 The opening of PaperWest brought together a crowd eager to see nationally-recognized artists displayed on Utah’s turf. (The exhibit didn’t accept submissions from students at the U, specifically targeting a participant group farther away than the regular crowd of this particular showroom, and brought in Brodsky as an outside pair of eyes.) With so much variety, the show gave the assembled crowd something to mull over, the medium of paper bringing together traditions as diverse as 20th-century surrealist collage, digital photography since the 1980s, paper sculptures as old as origami, and much more. Although much of our daily business and interaction with the world is conducted on a screen, the old white page still has something to it.