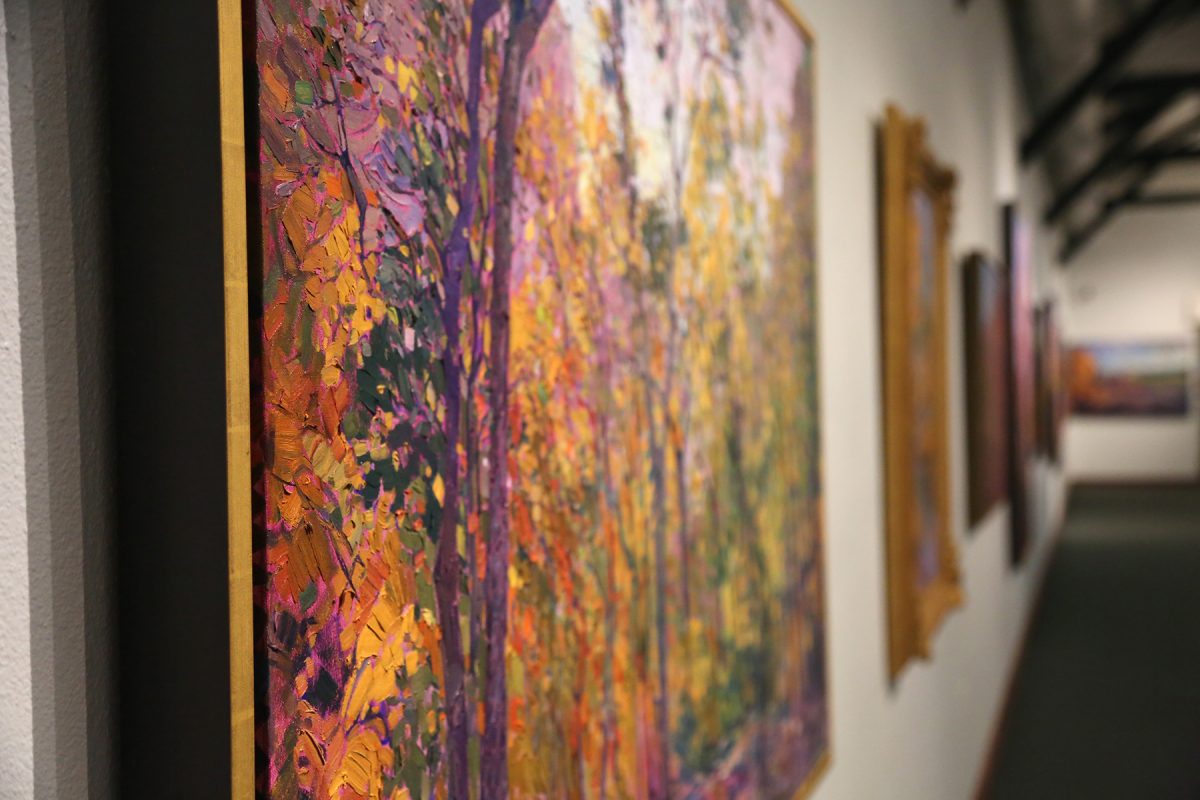 About 10 years ago while at a personal crossroads, Los Angeles-based artist Erin Hanson began rock climbing in Nevada’s famous Red Rock Canyon. It was while she developed her adventurous new hobby that she rededicated herself to her work as a professional artist, inspired by the rugged beauty of the southwestern landscape. Committing herself to completing one painting a week, Hanson began the process of developing her personal artistic style and technique. “Early in the morning, I’d go climbing and see the light on the redrocks and think ‘I know I can capture that,’” she says. A decade later, Hanson continues to complete one painting a week, though she now works from her spacious studio-gallery in LA when she’s not exploring the wilderness of the western United States.

In her most recent paintings, Hanson has turned to a more familiar landscape—that of the national parks. Hanson has hiked and backpacked her way through many of the parks of the West, including and especially southern Utah’s Zion National Park, where she recently completed the ambitious 50-mile Trans-Zion Trek. A collection of her paintings from this and other adventures is on display in the St. George Art Museum exhibit Erin Hanson’s Painted Parks Jan.16 through May 28.

Some pieces in the show prominently feature human-made guide rails or built-up trails, which Hanson says is her way of pointing out everything the National Park Service does for its visitors. “They guide us on the trails so that we can experience these wonderful places without overrunning them,” Hanson says. In another gesture of appreciation, Hanson is dedicating 10 percent of her painting sales to Zion National Park.

In technique, Hanson’s work follows the philosophy of Impressionism (her style has been dubbed “Open Impressionism”) with minimal, direct, impasto brushstrokes giving the “impression” of the painted scene, as though pausing briefly before hurrying off down the trail. Hanson says this “in-the-moment” brevity in her portrayal of landscape is congruent with her personality. “This is pretty much how my mind works,” she explains. karatHer palette, however, reflects German Expressionism, with vibrant orange and emerald hues appearing often in the foreground.

Hanson begins her paintings with a brightly colored underpainting. Orange, purple, and magenta peek out between brushstrokes, occasionally forming branches and other objects in the foreground in a subtle reversal of negative space. A few paintings are on gold leaf on canvas, which Hanson says she enjoys working with because of the transient play of light across areas where the gold is allowed to peek through.

There is a fair amount of variety to Hanson’s exhibit, especially considering all the works were created in 2015. The texture of delicate “Canyonlands Wildflowers” reminds one of stained glass while “Gilded Reflection”is more blended, with less-defined shapes rolling into one another. The final and one of the most dramatic paintings Hanson completed for the exhibit is “Dawn at Bryce.” The view down into the canyon has been exaggerated, giving it an almost fish-eye distortion accompanied by slight vertigo. Appropriate for an artist who made the decision to paint professionally while dangling from a sandstone cliff. The mosaic-like rhythm of Hanson’s brushstrokes and pure hues (she prefers a limited palette with no added medium) make the distant scrub resemble small glass beads between the larger shapes of Bryce’s redrock formations. Hanson says the painting was something of a personal Waterloo this past year, taking nearly three times the time to complete as most of the other paintings, but she persevered, determined to capture the waning light reflected on the snow covering the redrock canyon.

Although Hanson was first drawn to painting the unique geology of the Southwest, it is the flora that has inspired her of late. She loves painting the cottonwoods in Zion National Park because they are so dynamic, she says. The sometimes green, sometimes gold foliage appears often in the collection, though it is the fiery aspen grove in “Cedar Breaks Color” that became the featured image for the exhibit. 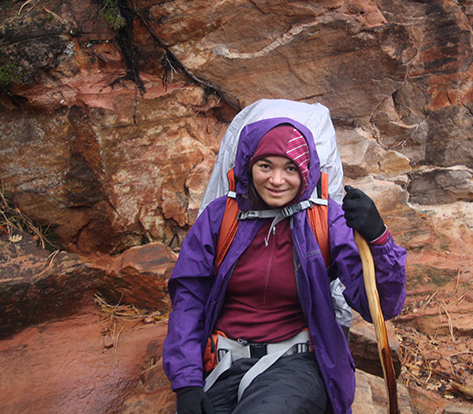 Erin Hanson’s Painted Parks, St. George Art Museum, through May 28. Hanson will be the guest lecturer at the Museum on May 19 at 7 p.m. The artist’s youthful energy and affable personality make for a pleasant conversation, while her talent and professional perseverance make her an artist to watch.