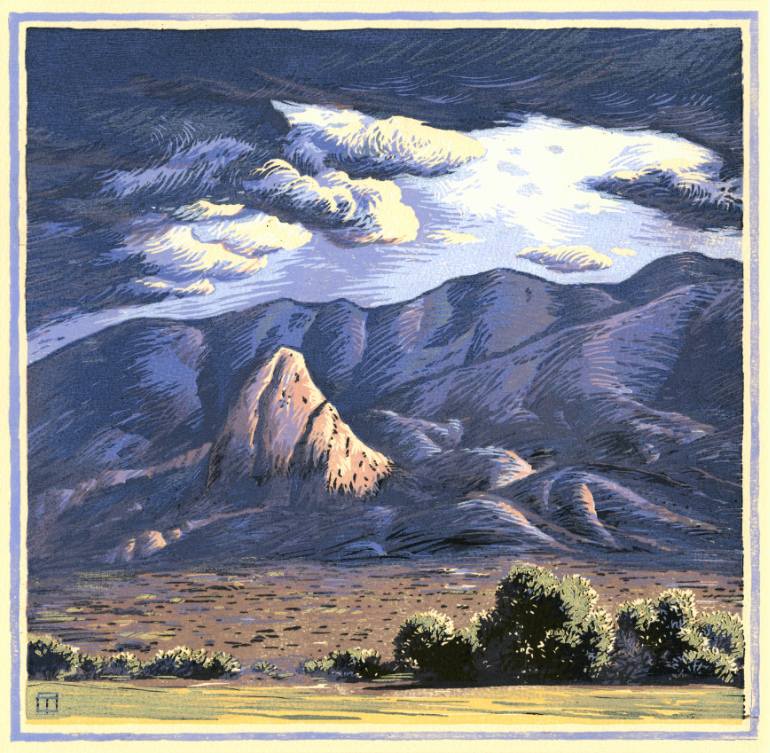 Brad Teare has been making woodcuts for more than 20 years. It’s a process he began during his career as a freelance illustrator. But as his work has progressed it’s become more painterly, in a precise sort of way. You will see that painterly progression in the largest exhibition of his woodcuts to date this month at Alpine Art.

From the starkly beautiful black-and-white work that characterized his early woodcut illustrations, Teare began experimenting with color. First, he wanted to master the skill of getting a completely even color along with the black. With that accomplished, he began experimenting with layering of colors in a less precise, more painterly way. His recent landscapes may use eight to fourteen different blocks, one for each color. And sometimes, instead of even color, his goal is to make the paint more or less translucent or to achieve a textured effect. 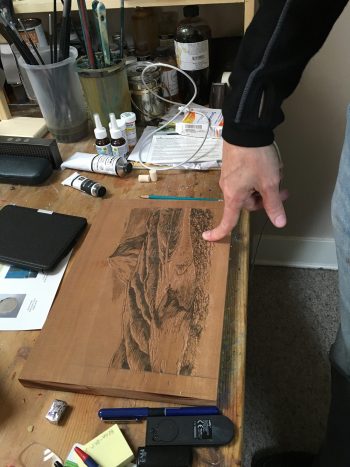 Teare uses the “lost key” method of developing a multilayered woodcut. Starting with a sort of line drawing of the entire composition, he cuts a block that contains this “key.” He prints it in a dark color on vellum, which does not absorb the ink, and then uses the vellum to print the identical image on the eight or more blocks that will be used to build the rest of the colors. The dark key color, usually brown or purple, but not quite black, becomes the darkest dark in the final work. He carves each block to print a different color, being sure to leave identical areas on each block for the buff color of the paper to show through (the lightest light in the final print). As each block is printed, the ink covers some of the initial key, so that by the final print, much of the key is lost.

This method, very different from the additive method of Japanese woodcuts in which the darks are printed last, was pioneered by Gustav Baumann, an artist with whom Teare studied.

Precision is important to ensure accurate registration of each block printed over the previous one. However, Teare says, “I like a little mis-registration. I’m evolving from a more fastidious approach to a looser approach.”

You may think registration is the most difficult part of this process, but Teare says getting the color right is the biggest challenge. “The hardest part is actually getting the colors to work together,” he says.  “Sometimes I’ve mixed color for eight hours to get one color to work. If you print one color wrong, it’s hard to correct.”

The combination of accuracy and painterly approach is particularly evident in the eight-block woodcut, “Summer Light.” A darker stream meanders through wetlands of varied shades of green and yellow grasses. Or in “Light on Elephant Rock,” a woodcut that saves the light of the paper for the light shining on the rock face and on the tips of the foliage in the foreground, and where the overlapping hues in the clouds create iridescent new colors.

Teare’s skill is also evident in the way he subtly gradates colors in some of his skies. In “Afternoon Walk,” for example, there is a subtle shift from a darker more purple sky at the top to a lighter, more blue color near the horizon. Teare explains that the technique is referred to as a “split font,” and is achieved by rolling the brayer in the two colors of ink until the ink is smooth and then inking the wood block in the correct direction for printing the color from darker to lighter.

Teare also has learned through much experimentation and practice how to add texture to the paint. In one woodcut, “Door Like the Sky,” featuring a wooden door on an old cabin, the pebbly appearance of weathered wood is achieved by adding magnesium carbonate or chalk to the paint. The result is similar to what a painter might get with a drybrush technique. 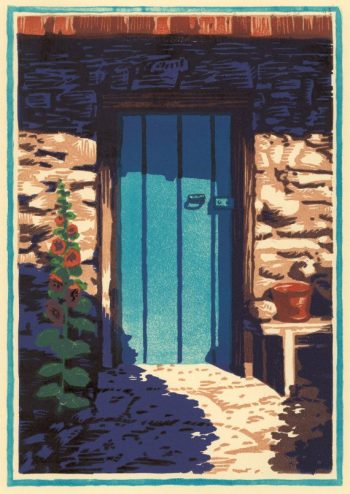 Teare says, “Part of the art of woodcut is knowing when you have to be precise and when you can let go. Woodcut is the art of perfect and imperfect color and application. If you try to get too much control you lose some of the energy. What makes it really energetic and interesting is the accidental quality. You could make it look too perfect and it would look more like a silkscreen.”

Each edition of woodcuts includes about 20-40 prints. That means that Teare must print about twice that amount to have enough of the best to sign and sell. The remaining artist proofs reflect trial and error color variations en route to achieving his artistic vision. For the show at Alpine Art, all prints will be framed for display but may be purchased unframed as well.

Teare’s work reflects his emotional connection to the landscape. Originally from Kansas, Teare moved to northern Idaho after high school, lived in a cabin near Moscow Mountain, worked outdoors building trails by day, and painted watercolors at night. Later, he enrolled at the University of Idaho. Although academia in the late ‘70s valued abstract expressionism over realism, Teare much preferred drawing and painting what he saw. He transferred to Utah State University and studied illustration. After graduation, Teare and his wife, painter Debra Teare, went to New York City where he soon landed illustration jobs from The New York Times and other publishing houses. Perhaps his best-known work from that period was his woodcut cover illustration for the best-selling book, “Women Who Run with the Wolves.”

In 1993, Teare and his wife returned to Providence, Utah. Much of his illustration work had focused on the figure, Teare said, and he felt a bit burned out. So he resumed his love affair with the landscape and began painting in oils as well as woodcuts.

Teare later began working with acrylics as abstract color experiments. A friend who visited his studio suggested he exhibit some of them. Last year, he had his first solo exhibition of acrylic paintings at Alpine Art. Just as he experiments with colors and additive materials to create effects in his woodcuts, he does the same with acrylics. His paintings are heavily textured using sand, chalk, vermiculite, or an acrylic medium. Unlike the subtler colors of his woodcuts, his acrylic paintings are vivid and pure. Though he does not use a final varnish, his paintings glow, whether from the paint itself or from the addition of a gloss medium. Some of Teare’s acrylic paintings will hang in Alpine’s back gallery during the woodcut show.

Like other artists who long to resolve the disparate directions their art forms have taken them, Teare has begun some acrylic paintings that maintain the textural and color abstraction of his acrylic abstracts while using the landscape subjects of his woodcuts. Will this meeting somewhere in the middle of his artistic vision and practice bring him satisfaction and peace? Will it be the compelling next series for a gallery exhibit? Stay tuned for the next evolution of Brad Teare.

Brad Teare’s 20 years of woodblock prints opens at Alpine Art in Salt Lake City during Gallery Stroll, April 15, 6-9 pm. The gallery will have an artist’s reception on Thursday, April 14, 6-8 pm. Teare keeps an active blog, where among other things you can view videos of him at work.

This article appeared in the April 2016 edition of 15 Bytes.