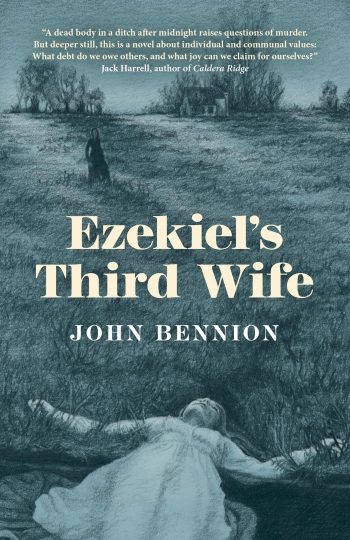 In the tiny pioneer outpost of Vernon, Utah in the West Desert south of Tooele author John Bennion was born and raised. Little has changed there since the time this fiction writer and professor of English at Brigham Young University lived there in the ’40s and ’50 and perhaps even since the time his fictional characters lived there during the early days of Mormon settlement. Aside from a small post office and a lovely little cemetery, the only sign of human habitation is a clustering of houses here and there with lots of space in between them.

About ten miles north of Vernon along the east side of the road, is a historic marker commemorating an underground store that stood near there until it was abandoned early in the 20th century. Over the years, the underground space has filled in with rubble, so there’s nothing really to see anymore, but the sign is informative and includes a drawing of the store.

That store figures prominently in the first of Bennion’s two detective novels, An Unarmed Woman, which was released within weeks of its sequel, Ezekiel’s Third Wife, in April.

In the first novel we’re introduced to Rachel O’Brien Rockwood, stepdaughter of an old polygamist, JD Rockwood. Her mother had abandoned her father, a good-for-nothing old drunk, and fled their Nevada mining town for Utah where she embraced Mormonism and eventually polygamy by becoming Rockwood’s third wife.

Rachel has a complicated relationship with polygamy. She reveres her stepfather, JD, who is a competent breadwinner and an expert tracker. But she does not agree with his choice to live what their adopted tribe refers to as “The Principle,” the practice of having more than one wife. The relationship is further complicated by the fact that Rachel shares JD’s skills and desperately wants to work as a tracker herself. But JD won’t hear of it. His plans for her involve marrying her off to his polygamous neighbor Ezekiel.

Against her stepfather’s wishes, Rachel involves herself in a murder investigation. And true to the genre there is intrigue and drama, but nothing that really changes the trajectory of her life. Indeed, at the beginning of the sequel, we learn that she is the titular third wife of Ezekiel and living in his home.

The year is now 1891. Three years have elapsed since the events recounted in the previous novel, and a lot has changed for Rachel. For one thing, the current president and prophet of the LDS church, Wilford Woodruff, has recently ceased the continuation of polygamy, but not before neighbor Ezekiel Wainwright has taken Rachel as his third wife, just before his departing for a church mission to England. Despite the church’s abandonment of “the Principle,” Ezekiel has sent word from England of yet another woman he has married, a young British convert who will return with him to his other wives in Utah. Against protocol, he hasn’t bothered to consult his current wives before going ahead with this plan.

Meanwhile, Rachel’s childhood friend, Matthew Harker, has tracked her down after having searched for her all over Utah Territory. When Rachel and her mother left Nevada eight years previously, he was just a boy, but he had promised her that he would come and find her someday. He is a strong, good-looking young man now, and Rachel finds him attractive. The only problem is that she is now married to Ezekiel. The novel poses the question: considering that her stepfather J. D. took Rachel’s mother as a third wife, even though she was still married to a drunk in Nevada territory, why shouldn’t Rachel marry Matthew, who is more suited to her both in age and temperament?

She does exactly that, but her happiness is complicated by another murder. This time the victim is of one of her sister wives, whose body Rachel finds in an irrigation ditch surrounded by her new husband’s boot prints. When her stepfather gathers a posse to track the apparent killer, Rachel is left behind in town, trying to uncover the real killer before her stepfather catches up to her husband and one shoots the other.

Bennion’s vivid prose in Ezekiel’s Third Wife provides a rich description of the small settlement of Rockwood and environs in Utah’s West Desert in the 1890s, not only leading the murder mystery to its end, but ably capturing Rachel’s rich inner life of faith and doubts, as well as her ambitions.

Rachel is somewhat of a conundrum. Despite her frequent and very vocal doubts concerning the validity of polygamy throughout the previous novel, she has ended up becoming a plural wife while still a teenager. Perhaps she felt she had no other real options. Or maybe it was just that she didn’t want to disappoint the stepfather she admires so much. Whatever the case, it’s clear that polygamy is not for her. She doesn’t share the generally fanatical views of her older sister wives — particularly second wife Sophia — and she wonders at how she has wound up in this predicament:

Just that morning, Sophia had glared, as if she could read my thoughts and private acts in my face. “Rachel, your damnation slumbereth not.” I had frowned back, wondering what Sophia knew. She dreamed dreams and had visions, like the prophetic women among the first Mormon pioneers. At night she sometimes wandered our rooms in her white nightdress, muttering, eyes staring but not seeing, as if she had already passed through the veil into Paradise.

Adding to Rachel’s frustration is the fact that Rockwood is experiencing a particularly hot and dry summer.

The sun seemed bound and determined to transform our patch of Utah Territory into hell. Since early June, not a single drop of rain had fallen — nearly three months of drought. It was almost enough to make me believe in Sophia’s vision of a malevolent god.

As the scorching summer progresses, it becomes increasingly clear that there is not enough water to go around. Neighbors begin to scheme against neighbors in the dangerous business of sneaking a little more water where they can.

Given the difficulties of her situation, it’s not surprising that Rachel would welcome the escape Matthew’s return affords her. Having married him clandestinely two weeks previously, her thoughts are a muddle of caution and dread the fateful day she walks along the irrigation canal near her home at dusk.

I glanced down the lane at the shadowed houses, all filled with righteous townspeople. Oh, how they’d raise their hands to shocked mouths if they knew. “Rachel O’Brien Rockwood Wainwright Harker,” I whispered. Could a woman garner names and husbands like birthrights?

At the same time, she’s bursting with anticipation as she awaits the arrival of her secret husband, who is coming to her this very night:

I folded back the quilt, folded it twice again, and hugged it close. Aunt Mary, J.D.’s first wife, had pieced it from scraps of my own mother’s dresses — Mary’s gift on my marriage to my first husband, Ezekiel Wainwright, but tonight I would spread it in the barn loft for Matthew. My mother, a wanderer and a rebel, would smile down from Heaven seeing her former skirts put to such use.

To paraphrase Stephen Sondheim’s Sweeney Todd, what happens next, well, that’s the book, and Bennion would rather you gave it a look.

Readers of Westerns will see something of Zane Grey in Rachel’s story. His 1912 novel Riders of the Purple Sage and its sequel The Rainbow Trail painted an unflattering picture of polygamy as practiced by authoritarian and generally unscrupulous patriarchs in the remote southern Utah desert in the 1870s. His negativity has caused him to be looked upon with a general disdain by a long line of Mormons, including the historians Leonard Arrington and John Haupt.

In contrast, Bennion’s polygamists are a less nefarious bunch, distinguished more by their general ineptitude than by despotism. Rachel’s stepfather is not only an exceptional tracker but a crack shot, as well, and an able provider for his family. Plus, he’s honest to a fault. She loves and admires him, yet his ignorance about women’s desires and aspirations and his primitive views on marriage continually exasperate her. As she contemplates leaving Rockwood forever, she ruminates on this frustrating contradiction informed by theology:

This is where I had first started to believe in the Mormon God, that the universe was endless, as was humanity, composed of raw material called intelligence, which was something like light. Sometimes the flesh dampened that brightness and made men stupid. The flesh seemed especially thick for Brother Swensen and for J.D., two such pious and even holy men. I shook my head at the irony.

This is a pivotal time for Mormon literature in which a willingness for greater candor about the faith, its culture and its history and the nuance of character continue to crack open possibilities, including for audiences outside what can be the hothouse of Mormonism, to engage these stories. The historian Greg Prince recently encouraged Latter-day Saints to own their religion, suggesting that true faith is willing to embrace the church’s history and doctrines. By tackling hard issues like polygamy in this series, and women and the priesthood in his 2000 novel Falling Towards Heaven, Bennion has demonstrated a similar attitude.

The two novels in this series also place Bennion in a recent trend of Mormon detective novels. Mette Ivie Harrison’s Linda Wallheim series, about the wife of a Mormon bishop living in contemporary Draper, Utah, has now reached four volumes and through its commercial publisher Hachette has reached a broadening American audience. The first novel in the series, The Bishop’s Wife, is particularly good, even groundbreaking. Others in the Mormon tradition are standouts, including Andrew Hunt’s three excellent novels set in 1930s Salt Lake City, starting with City of Saints; and then there’s City of Brick and Shadow by Tim Wirkus, which won an Association of Mormon Letters Novel award. Set in Brazil, the story involves LDS missionaries investigating the disappearance of one of their recently baptized converts.

Each of these series brings something unique to this new subgenre of Mormon letters. Bennion’s is the first to be set in the frontier period and at a time when as many as 20 percent of Mormons lived in a polygamous household. Through the eyes of Rachel and others, we see clearly the disadvantages of polygamy and its potential for abuse, yet Bennion’s novels do not openly condemn it. This “show, don’t tell” approach to the issue probably makes for a more powerful indictment of the practice than it might otherwise have been. Happily, I don’t think that is Bennion’s goal. I think he just wants to spin a good yarn about 19th century humans in a small, West Desert town — humans who happen to be Mormon.