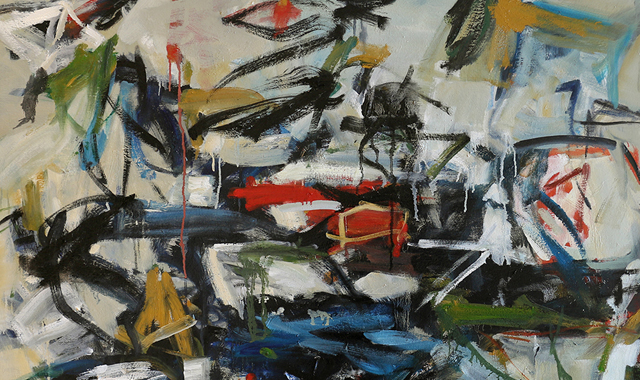 “Modernism, that is the ‘mainstream’ evoked by the history of books—the most coherent version of which is Clement Greenberg’s, but there are others—is seen as progressing in a straight line from Manet to abstract expressionism and beyond. The modernist interpretation of modern art, which is an extraction that dares not speak its name, partakes above all in an ontological project: once art was liberated from the constraints of representation, it had to justify its existence as the search for its own essence.”

In their new book of collected essays, which touch on a variety of subjects and artists, Rosalind Krauss and Yve-Alain Bois explore Georges Batailles’ idea of the “informe” or “formless,” which the French intellectual described as undercutting or subverting traditional ideas of the duality of form and content. The book is an exploration of art that breaks down hierarchies, disrupts interpretation and frustrates search for meaning. In that respect, it is a perfect primer for understanding the work of Salt Lake City artist Oonju Chun, who says, “I relinquish the responsibility to create meaning, however on a certain level, that is the most meaningful aspect of why I paint.”

In 2012, the Korean-born artist stunned us with a powerful exhibition in the front room of Salt Lake’s Finch Lane Gallery. The show featured paintings full of energetic brushstrokes that pulsed across the surface of the canvas like the shimmering light and color of the city at night, leaping flames of a campfire, images dancing on a pond or shadows in a stormy sky.  At Phillips Gallery this month she has returned with a number of similar shimmering works, but also new images in which the brushstrokes coalesce into throbbing forms.

This shift, or development, is not a conscious attempt to say something new, since Chun says she is not a conceptual painter, “but a spontaneous, reactionary painter. When I paint, it is a purely spontaneous visual response to lines, colors and composition. I am not thinking on a conceptual level and I love that. It is liberating and exhilarating.” Quite simply put, this is art that is linear and without alternate construct, recognizing only itself, a mirror reflection, art that is for its own sake, purpose and utility.

When Chun paints a canapé that to many may look noisy, aggressive, loud, or vociferous, while at the same time fecund, ripe, full, abundant, lush, rich, and piquant, they are mistaken. Because there is no noise, but silence. There is no fecundity but formlessness and to think otherwise is to misunderstand the essence of Chun’s work.

“My images lack any conceptual consideration, one can say it is less complicated, rather, quite simple in its essence,” says Chun. “I cannot explain the meaning of my work because I do not impose any.” Chun’s work, without conceptual interference, is allowed a formlessness as suggested by Krauss, made demonstrative by looking in a different direction, and there, Chun’s formlessness resounds with more security.

“My paintings are totally devoid of meaning from its creator. I think that is why it works better at striking certain ‘raw’ emotions,” the artist says. “The emotional response is direct and immediate. It goes from my eyes directly to my heart.  It does not require mental interpretation. If a viewer feels the similar emotional sensibilities as I do, then, my paintings have spoken to them.”

Only in the silence, only in the formlessness is this kind of relationship possible and thus the formlessness is demonstrated—we have a work of utmost purity, without the hindrance of meaning, that is able to be communicated by its author with its audience on a level that is exact, given this purity, thus demonstrating a fulfillment of the measure of the kind of formlessness Krauss is speaking of in her book.  The self-realized essence is discoverable in a relationship with an audience that answers back with the same essence that it expresses, a mirror image of itself.

Further demonstration is found in the lack of any kind of structuralism, which is the designation for meaning.  Structuralism allows for semiotics and semiotics creates binaries of meaning that shift from authenticating to a challenging of one to the other.  Without any kind of structural implications, without anything read as symbolism, semiotics are disqualified.  This does not have to mean literal figural icons, but any form of visual structural signifier such as contrasts of light and dark, balance, tonality shifts, paradigm shifts, binary shifts, tonal rhythm and harmony, texture giving designation, repetition, anything centering the attention such as angularity or a centrifugal area such as a concentration or boldness. Without structural signifiers of any kind, the stuff that abstract work is quite usually replete with, here, no occasion is given for the structure to arise, thus creating no grounds for semiotic relationships and the development of meaning.

In the end the works are not about meaning, or formal elements, but about emotions.  “All art forms evoke emotion,” says Chun.  “You must feel a certain way when you see my work!”  Emotional reactions to abstract images are subjective.  They are subjective upon one’s own life experiences, cultural experiences, visual experiences, emotional sensibilities, etc.  “My paintings,” Chun says, “become what each viewer gets out of it.”

This is where the intelligence to make great art is found, this is where the mind is required to create understanding from formlessness, thus one-upping a consumerist, mass-produced, over-sized, fuchsia, metal, balloon-bunny art-making mentality.

Making this type of work, without a roadmap, or a conceptual framework as support or crutch is courageous. “I deal with self-doubt as an artist constantly,” Chun says, “asking myself if my works are relevant in the current culture and how my viewers will react to my work and so on.” A show like this at Phillips, then, is a pleasure for us, and for the artist an affirmation — “that is, until I am faced with the next wave of angst and self-doubt.” Which one may assume will come into full fruition as formless wonder in works to come.

In this 2012 work, Chun’s brushwork coalesces into masses rather than spreading across the entire canvas.

Oonju Chun’s works are on exhibit at Phillips Gallery through March 14.