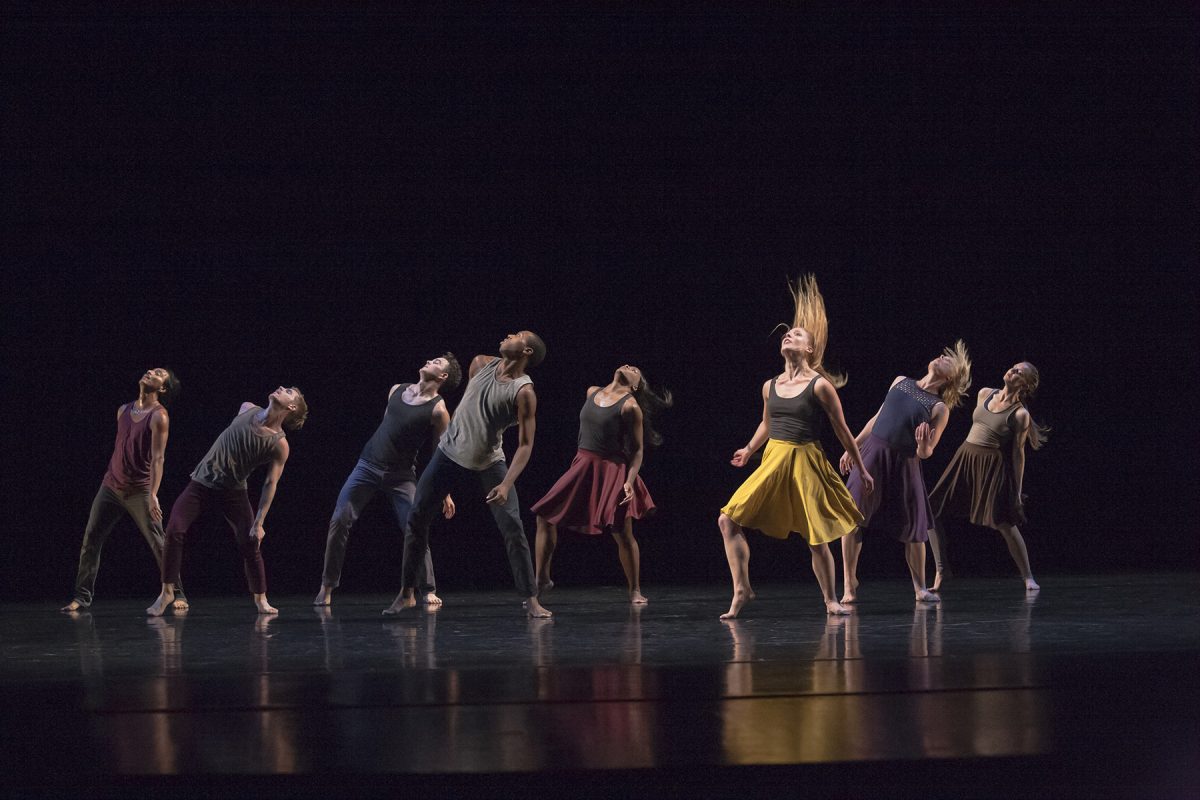 Of all the brilliant theatrical tropes that Repertory Dance Theatre has introduced over half a century, one of the best comes right at the start of each performance. As the house lights dim and the roses on the curtain fade from sight, anticipation calls the audience to order. Then, when the stage lights come up, the curtain has disappeared. No clanking stage machinery here; rather, direct access to the dream state. Dance is the purest kinesthetic equivalent to music, which is to say the most abstract form of theater, instantly accessible to anyone who wants it. RDT lets nothing get in the way.

Then half a dozen or so dancers take the stage, sometimes singly, or in pairs from opposite sides, or three in unison. These quantitative entrances, and the exits interwoven with them, make up an important, structural part of the choreography. Costumes are minimal: modest enough; designed to facilitate movement rather than create fictional identities. Some dancers’ gestures are broad and sweeping, graceful full arm swings alternating side to side. Others are mincing, small gestures made with hands directly in front of the torso. Heads rock from side to side as if building up momentum, then revolve in great circles exaggerated by whirling hair. Legs extend, reach out and draw back. The figures glide across the floor, then hop, hop, hop. A pas de deux is traded in sequence from pair to pair, like a line in a baroque canon; then all six (or eight) dancers join together and weave an intricate pattern among each other. 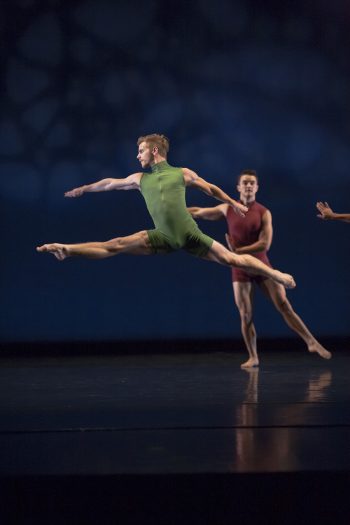 There were five dances in the first concert of RDT’s 50th season, and it’s not a criticism to say that this description fit all five. Rather, it’s a measure of the company’s large repertoire of superb modern dance works saved from extinction that, given the impulse, they have sufficient dances on hand that fit a single model so closely, allowing the differences and the details to shine like so many crystals in a chandelier. In the opener, “Chant,” the costumes were marked by heavy, vertical bars, which my companion said made RDT alumnus Tim Wengerd’s Pueblo-inspired choreography seem like it was happening in black and white. Modern dance began by reconnecting feet to the floor, but in “Chant” the patterned steps restore attention to that fact.

Dance is unique among the arts in having two audiences. If a musical soloist or a theatrical performer is particularly brilliant or unusually regrettable, most of the audience will recognize it. In dance, though, painful or difficult passages immediately divide those watching into the wildly appreciative and those baffled by all the cheering. Two excerpts from “Energizer” made the point more broadly. That anyone remembers all the rapid-fire steps, let alone possesses the stamina to complete them, is cause alone for those who can feel the demands in their bodies to cheer. But a case can also be made that such cause may indeed stand alone. Why this somewhat baffling catalog of sexual roles set in amber 35 years ago remains in the repertoire just might testify to an indifference to content in the face of sufficiently exciting choreography. Yet if critic Anna Kisselgoff was right to say, in 1980, that this was the future of dance, one wonders why its evolutionary approach to complexity hasn’t inspired replacements for the one uncomfortably segregated pair of performances the evening offered.

Thirty years and a lifetime or two of dance evolution separate “Pigs and Fishes” from “Dabke,”   but it’s equally fair to say of either that time in the theater cannot be better spent. The former, in spite of its venerable age, contains some stunning steps that felt completely new and original, introduced by a single woman whose solo sets up all that follows. When she is joined by three men and three more women, a versatile asymmetry is established among seven figures who explore the possible permutations. As in all five works throughout the evening, it proceeds in large part from focused actions that begin in one spot and spread through the company, and creates intricate patterns in which each dancer threads a path between the others. Unlike the rest of the program, in both “Pigs and Fishes” and “Dabke” the dancing gets down to the floor. That said, “Dabke” takes an approach that contrasts with that of “Pigs and Fishes.” As befits a work born in the age of musical sampling, much of its material draws on contemporary folk and popular dance sources. Pretending race and national origin don’t matter is as daft and pointless as treating sex as destiny, and Israeli-born choreographer Zvi Gotheiner proves it by illuminating a fundamentally Palestinian and Arab expression as only an outsider can. Some of the solos feel so intimate and self-expressive that after one particularly plangent and disturbing scene, convincingly made to feel spontaneous by Efrén Corado Garcia, three more figures double his precise motions to make the point that what feels like individual fate and personal response is never entirely autonomous: everyone in conflict ends up acting a part. 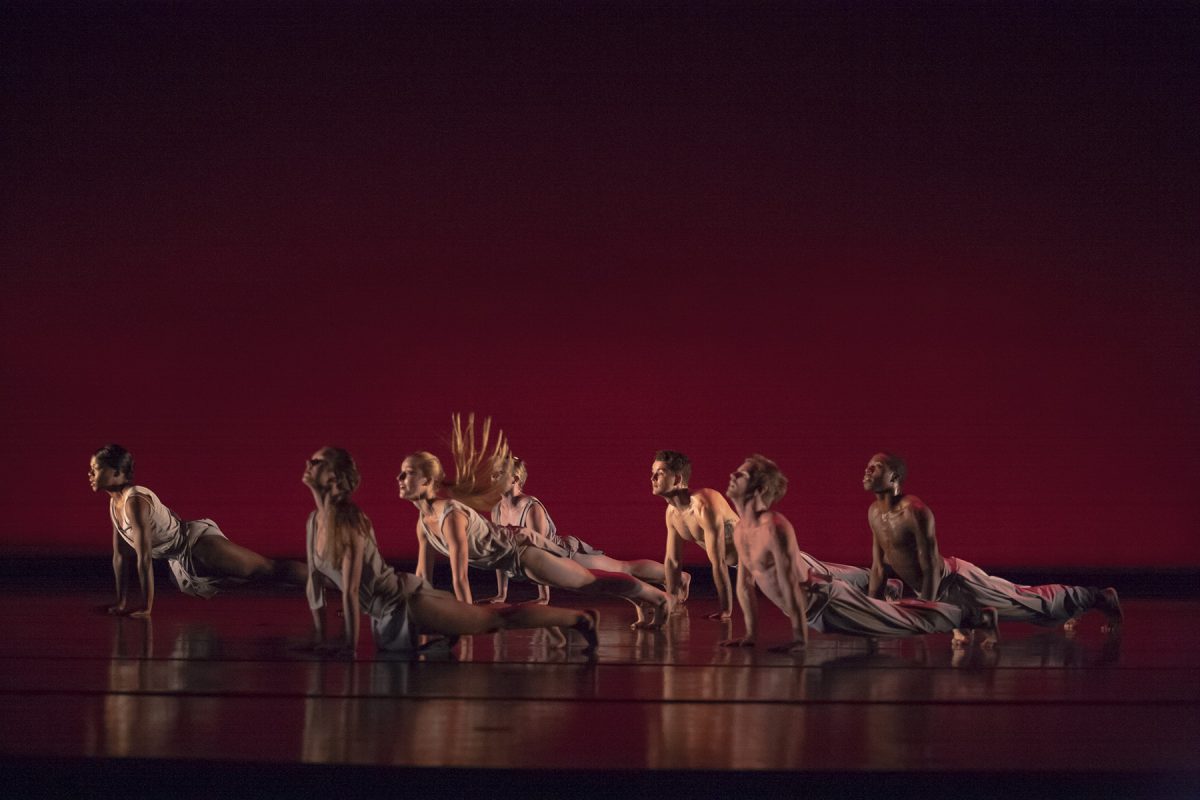 Ritual opened Repertory Dance Theatre’s 50th anniversary season, October 1-3. The season continues with Revel, November 19-21, a celebratory acknowledgement of RDT’s alumni dancers and choreographers, emphasizing pieces that are full of levity and joyous energy; and Revere, April 14-16, 2016, a tribute to José Limon, whose iconic and timeless work has been performed by RDT since 1967.

For another review of the performance, check out our partners at lovedancemore.org.