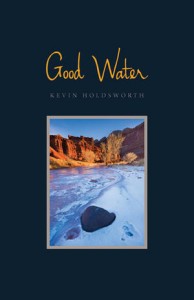 In his collection of essays called Good Water, Kevin Holdsworth says, “To find and frequent the periphery is imperative for the artist, and dangerous—the margin is a sucking whirlpool.” Could there be a place more marginal or peripheral than the small town of Good Water in Wayne County, Utah from which his collection takes its name?

Good Water, which is apparently the name Holdsworth gives to Torrey, Utah, is so peripheral that it is 20 miles from the nearest hardware store, boasts a past name of Poverty Flat, and in 1988, when Holdsworth’s account begins, the population was only 126. So, if frequenting the periphery is imperative for the cultivation of creative expression, then Holdsworth’s choice to live and write in such a small outpost in the heart of the Utah wilderness is a wise choice for an artist, but also a risky one.

These essays consider the contingencies of rural living—psychological, social, political, and economic—and in the delineation of them Holdsworth draws a portrait of a place not only harsh, arid, and isolated, but also a place that is generative, varied, and infinitely wild. His essays are about the ways in which the author and his friends, family, and neighbors manage these risks of rural existence, and they affirm the benefits of peripheral, but always essential and deliberate, living.

Of course, deliberate living has been a central theme of nature and wilderness writing since Thoreau, and Holdsworth references his Concord predecessor in his introductory chapter. But Thoreau’s wooded wilderness is far from the thirsty moonscape of south-central Utah, and Holdsworth’s style of deliberate living requires plenty of sweat and stress (and even a bit of quiet desperation) in a land of limited economic opportunity.

The essays record, in an approachable and personable tone, the many creative means by which the tenants of Good Water and the surrounding areas live and sometimes even flourish. From working part time for the park service, to driving the local school bus, to recycling and reusing countless items from the town dump, the people of Holdsworth’s essays are resourceful and determined. Many of the inhabitants are born into the remote and spare lifestyle of Good Water and Wayne County, while others are motivated by a need to escape the competitive rat-race of more densely populated areas. But Holdsworth is most interested in those people motivated to tolerate the long, windy winters and the short, dry summers by devotion to the aesthetic offerings of Wayne County.

Ward and Gloria Roylance are two characters in Good Water who want to preserve and protect the land of Wayne County because they see the land as a “great artistic exhibition.” Holdsworth says about them:

The aesthetic of nature-as-art propelled and informed their activist thinking. One can support the idea of wilderness for several reasons: it is good to preserve places for ecological or scientific reasons, it is a redemptive playground, it is a church and sacred, it can keep us sane and remind us how things used to be, but Ward and Gloria saw especially the art in it. You don’t build a natural gas well in the middle of the MOMA, do you?

Holdsworth honors and esteems the Roylances, and his expression of their love for the land as a work of art foregrounds the overall project of the book. While his essays are both personal history as well as history of place, they also serve to name, order, and classify the chaos of this particular wilderness, to expose its particular form of beauty.

As Holdsworth says about the names of various peaks, mesas, cliffs, and mountains: “Names control the chaos, turn it down a little.” And writing a history of one’s life, of the inherent hope in the acts of building and planting, of the shame and anger of divorce, of the amity or hostility in relationships with neighbors, and of the way the landscape intersects with and influences all of the above is an artistic endeavor, one that parallels and complements the need to portray the land—the earth, stone, cedar, cliffs, and valleys—as art that inspires, heals, and nurtures the spirit and soul.

This theme of not “landscape art” but landscape as art, lives throughout Holdsworth’s ecstatic descriptions of the harsh but stunning country. So enticing are these literary forays that I now want to revisit Wayne County after many years away. But what is missing from the essays is a sort of closeup emotional candor that reveals the idiosyncrasies that make Holdsworth a unique and fascinating mind. This is not to say that the author isn’t unique and fascinating; it is simply that the essays sometimes skirt around or withhold the emotional honesty that I hope to experience when I engage with a work of art.

Part of the problem is with the genre itself—specifically with personal nonfiction—which does not offer simulation or mimesis as a means of getting at emotional truth. Nonfiction, when retelling an account of something that actually happened, must try for acertain veracity in order to be legitimate. Fiction, on the other hand, uses mimesis to unearth or impersonate the truth that might sting but that also provides catharsis because the truth can be dealt with through fictional characters.

Since nonfiction relates the actions of real people and real events, an author must manage the tension between being honest and being cruel. In describing his own divorce, Holdsworth errs on the side of civility. And I can’t blame him. But there were times when I wished I knew in exactly what way his divorce was painful—I sometimes craved more emotional specificity. And the same is true even about his fight for environmental causes. I wanted to know what the emotional or psychological fallout was for him when the majority of his neighbors in the small community despised his stand against a proposed “cash-register” dam above Good Water in which sales of the electricity the dam generates is used for both its construction and maintenance.

But Holdsworth’s book is not a polemic, despite the current tensions of public/private land use currently roiling the American Southwest. While he does discuss in detail the problem of water in the region, and the environmental cost of cattle grazing, he doesn’t sermonize or shame or condemn as much as he describes the place he loves and offers his view as reason enough to protect the often brutal but still precious landscape. In fact, as a devoted environmentalist he is surprisingly even-handed in his presentation of the dilemma for water and the need to preserve resources and land, recognizing, for example, how President Bill Clinton’s designation of the Grand Staircase-Escalante National Monument, besides being a cause for celebration, brought with it some undesirable changes as well (like tourists and elevated real estate prices).

Holdsworth not only tolerates his neighbors who have different political ideologies, but he admires their quirky personalities and their tireless work ethic. What’s more, he praises their appreciation of the land, even if they appreciate it in a way that is wholly different from his own. This collection is funny, clever, pleasant, and engaging as history and as reflections of an exceptional topography. The book is also indulgent, sympathetic, and humane. Holdsworth’s affection and enthusiasm for Good Water and for Wayne County are contagious and, when you get a chance to read these essays, they will entice you to the periphery, too. At least for a visit. 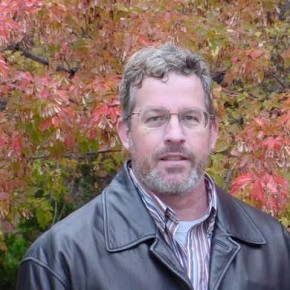 Kevin Holdsworth is the author of Big Wonderful: Notes from Wyoming and Good Water. His work has appeared in numerous periodicals, including Cimarron Review, Post Road, Creative Nonfiction, and Denver University Law Review. In 2009 he was awarded the Wyoming Arts Council creative writing fellowship for fiction. He lives with his wife, Jennifer, and son, Chris, in south-central and southern Utah.