Novels Set in the Art World 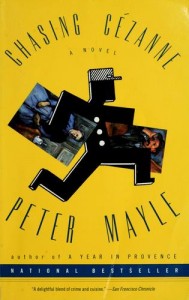 We haven’t had time to put together our next review of art world-related novels (Jean Echenoz’s I’m Gone is on deck – look for it next week), but when we were at Salt Lake’s Main Library we noticed something interesting: on the second floor a display case advertises “Novels Set in the Art World.” We were gratified to know that, either someone down at the library reads 15 Bytes, or else great minds think alike.

On display they had some of the books we’ve already mentioned — Michael Frayn’s Headlong, and a trio of Iain Pears novels — as well as a handful we hadn’t read, which we will mention here as items of interest, though not necessarily recommendations (if you pick one up, let us know what you think and we’ll publish it in these pages).

by Peter Mayle, the author of several novels set in Provence, promises hilarity and fizz via “hanky-panky on the international art scene.” Photographer Andre Kelly is sent to Provence to take glamorous photographs of the mansions and treasures of the rich when he spots a Cezanne being loaded onto a plumber’s truck at the home of an absent collector. Kelly finds himself on the trail of an international art scam and along the way runs into a beautiful agent, a super-savvy art dealer, a Dutch forger and some extremely greedy New York sophisticates.

In The Killing Art

Jonathan Santlofer, a respected New York artist, continues his series of Kate McKinnon novels with a story about an arts writer who is tapped by the NYPD when a lunatic begins slashing the paintings that are the subject of her work — the New York School of the 40s and 50s — as well as their owners. Art and art history provide the clues to unravel the mystery. 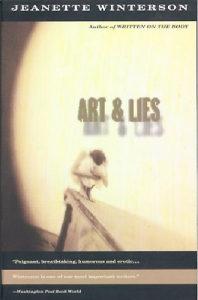 The most interesting-looking of the bunch comes from Jeanette Winterson, a British novelist who has been awarded the Whitbread Award, the John Llewellyn Rhys Prize and the E.M. Forster Award. Art & Lies

“brings together three apparently disparate figures on a single day in a single place — a high-speed train hurtling through the present or near future . . . Handel is an ex-priest turned surgeon, a man whose humanity has been sacrificed to intellect. Picasso, a young woman cast out by the family that drove her to madness, is comforted only by her painting. And Sappho is the famed lesbian poet of antiquity, as alive as her immortal verse. Each is at once beguilingly symbolic and painfully real, alienated from a brutal technological world and united by Winterson’s narrative, which directs them towards a single end of satisfying inevitability.”