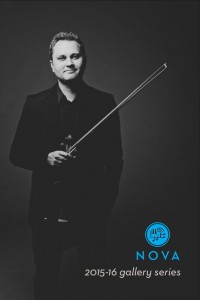 NOVA Chamber Music Series has always taken their programming seriously. They curate their concerts to bring a unique and artistic experience to their audiences. This also goes for their Gallery Series. NOVA’s regular season consists of six concerts at the beautiful Libby Gardner Concert Hall that seats over 600 people, but as a chamber music series, they also like to offer a true chamber music experience by scaling the venue down once in awhile.

This season, they will launch their gallery series at 15th Street Gallery, a favorite stop for many Gallery Strollers. Last year their series featured a pianist and violinist. This season, they switch up the instruments by bringing you some more strings. Alexander Woods will be the featured violinist, along with Brant Bayless on viola and Anne Francis Bayless (from the famed Fry Street Quartet) on cello.

Just like good visual art challenges and demands the full attention of the viewer, good music makes similar demands. If you’re unfamiliar with NOVA’s formula, they tend to pair old and new music to challenge the listener to draw parallels and contrast styles. This concert will pair Johann Sebastian Bach (1865 – 1750) with Michael Hersch (b. 1971).  Tim Smith of the Baltimore Sun said Hersch “writes music of astounding, even thrilling, complexity; music that can be hard to grasp, yet impossible to let go of; and music of stark, unsettling, seemingly implausible beauty.”