Not Always the Photograph We See: Joe Marotta at Gittins Gallery

“The photograph that we experience is not always the photograph that we see,” writes Joe Marotta on paper tacked to a wall of his show at Gittins Gallery. “I can look at a photograph I’ve looked at a dozen times and come up with a different story.” And this, Marotta’s terrific final exhibition at the University of Utah (after a long and distinguished teaching career there), offers us more than initially meets the eye: Both story and image.

There are a dozen fine smaller works running along the back wall and several large ones tacked to dividers (look for a hidden “surprise” here). Many of the photos are paired (two are triptychs) and most are joined with translucent pieces of tape in coded colors of blue or red or orange. You see immediately that Marotta is big on silver prints, Robert Frank, Walker Evans, even Edward Hopper, as he told this writer in a 2016 interview.

Then there’s poetry, too, written beneath some of his excellent and evocative images. Prose poems that it had occurred to him, he said on Sunday as he was hanging the show, only the night before to scribble beneath a few of his photographs.

That a few words are illegible, at least to this viewer, only adds to the adventure of it all – the lovely and invigorating jaunts through the streets of Paris and Italy with which he presents us: the hotel rooms with elaborately carved headboards to consider, the Paris bookstalls. As well as, and most importantly to him, the opportunity to sit al fresco with a coffee or wine at an everyday cafe, watching people walk by while contemplating “the wonderful theater of life.” There is plenty of that here.

He tells me he wrote these words without reference to the photographs they grace, but the poetry of them, your inevitable absorption in them, risks setting up a competition with the images (to which they really do relate) for attention. As he said in that 2016 interview, “They’re not meant to describe the visual information but they are meant to be sort of a part of the interpretation of a narrative.” In fact, the handwriting itself is so intriguing and unusual in this day of unvarying typeface that it draws the eye down and away from the main visual event. It is a risk well worth taking, even though it creates an intimacy that likely won’t work well with the crowd at the opening reception on Feb. 15. This is a show for no more than several at a time to observe and perhaps discuss as they view it; it proved ideal for one.

Marotta’s dreamscapes are mostly in variegated black and white with just a few color representations: a very large Roman interior and a smaller favorite of this writer’s, a fetching triptych centered around a gilt-framed oil painting of a couple twirling about a dance floor – a waltz, perhaps? – before a host of potted lacy ferns, she in a white silk ruffled gown, he in tails; on side images to the right and left (no tape here) blurred oil paintings hang on blue walls in a museum or perhaps in a stately home.

The text below reads:

“Between the Halles and the river there’s a jazz club called Le Petit Opportune. I remember listening to My Foolish Heart performed by a small trio in 1993. I was in love and sad and after the club closed walked the streets of Paris until 4 a.m. It was October and the night was cold, especially along the Seine, and I was glad I had a scarf.”

In a black-and-white sequence, we see a man’s watch stretched out on an unmade bed, a newspaper containing a boxed ad with the headline Do You Live in France? The almost inevitable translucent tape between the two photographs, this time blue (or French Ultramarine), the image on the right shows an intricate piece of wrought-iron railing across a window looking down maybe three floors to the street, a woman leaning back against the building across it, a student with a backpack walking purposefully near a prominent white-striped crosswalk.

“And then there was the moon, balancing between two buildings in the midnight sky, between blue and incandescent, in the clear night. Looking out the shuttered window on nights like this the city becomes your own. On nights like this you could be happy just walking the streets. Moonlight fills the room, covering everything.”

The first (or last) picture in the exhibition is a lovely triptych of identical images in France (blue tape) with arresting words concerning rain and trains. Just one more example of Marotta’s, “The photograph that we experience is not always the photograph that we see.” No point in spoiling it for you. 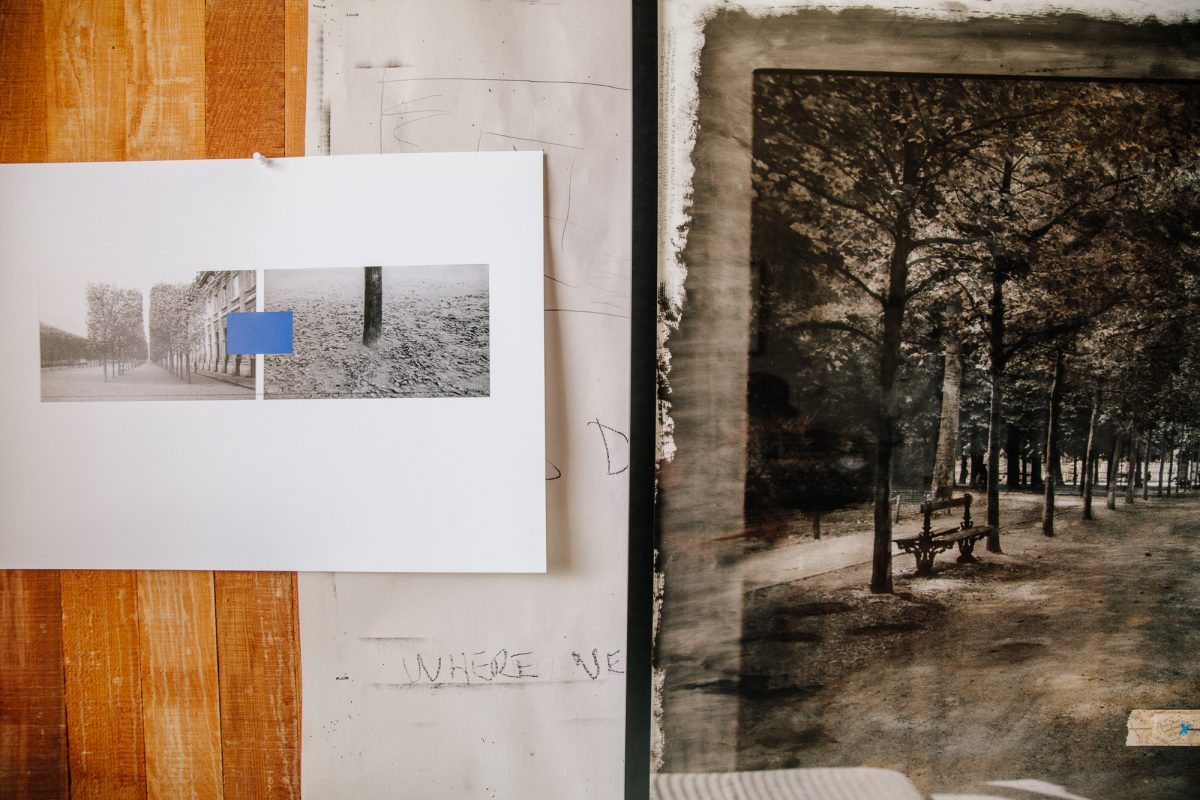