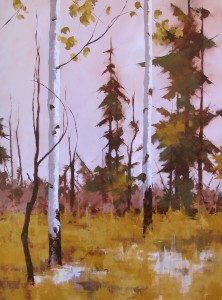 The drive from Salt Lake up to Eden can take you over Trappers Loop near Snowbasin Ski Resort and is an inspiring prelude to the equally inspiring plein air oils and watercolors exhibit by Hadley Rampton now through July 6 at the Free Spirit Spa & Yoga Center. That’s right, the spa located in the Wasatch back east of Ogden has recently acquired new studio space as well as the Gravitea tea bar, where the owners are experimenting with presenting art.

Opening night June 8 was in conjunction with the Ogden area’s 2nd Saturday Art Stroll. A small but appreciative crowd sampled the delicious tea fusions, smoothies and vegan delights while they kept time with guest singer-musician Che Zuro who reminded me of Joni Mitchell many moons ago even though Che was presenting an eclectic mix of her own folksy, alternative rock stuff as well as classic Rock and Roll like Led Zeppelin.

Rampton, diminutive but always athletic-looking, was, of course, there. When she’s not out fighting the summer flies or huddled over her easel on a bright winter day, she works at Phillips Gallery in Salt Lake City. A celebrated plein air oil landscape painter and watercolorist of sites in Europe where she travels regularly, she’s also someone who cares deeply about the arts in Utah in general (she’s on the board of Repertory Dance Theatre) and is animated by social and environmental issues (she recently donated 10 percent of her sales from a show at Phillip’s to Project Wezesha which supports rural Tanzanian children with secondary school scholarships and the construction of secondary schools).

The Eden exhibit features 19 paintings total, four of which are watercolors.  The oils range in size from 30 X 30 inches to 48 X 38 inches.  As for the watercolors, three are of Istanbul, the fourth painted in Salamanca, Spain.  With everything that is going on in Turkey right now the Istanbul pieces feel especially meaningful to Hadley. (An excerpt from her journal is below.)

“Some days I work with great energy,” Rampton writes in her artist statement, “slapping paint with a palette knife, dripping turpentine and then pushing around the thinned paint or letting the drips create patterns of their own. Other days, I’m quieter, and my use of the palette knife is more controlled, as I attempt to honor the integrity of each stroke. I work on instinct more than thought, for instinct holds greater honesty and clarity.”

Rampton talks about her process as a three-way conversation among the natural scene literally in front of her — sometimes through a necessary, Hazmat-styled suit to protect her from biting bugs in Millcreek Canyon — the painting and her.

Hadley Rampton is currently featured as the Utah Artist Of The Year in the art magazine Exploring TOSCA, out of the Twin Cities. Her show in Ogden runs through July 6 at Free Spirit Spa & Yoga’s Gravitea tea house located in an old mansion, 5522 @. 2200 N., Eden. 801-745-3630. 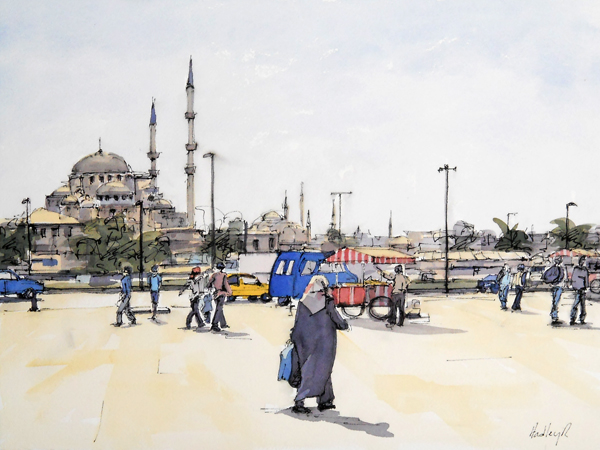 “The movement of the masses through the markets and bazaars; maddening or mesmerizing?  Like clogged arteries movement flows, then slows, sometimes coming to a stop; but the flow finds another way around the clot.  Artery walls adorned with jeweled lamps, sugary treats and elaborate carpets down one passageway; spices, clothing and legumes down another: a delight for sight, smell and touch.  Music sounds, or is that the call to prayer?  Chaos, yes, but oh the energy; the pulse of life, color and culture.  Somehow intoxicating, even seductive.

“I am in love.  Just over 24 hours in Istanbul and this city has utterly seduced me; the melding of multiple cultures, rich history, warm sun, sea air; the smells of spices and sweet teas, sounds of Turkish music, bustling people; the clang of the tram, the call to prayer and, most especially, the people: so warm, colorful and hospitable.  Yesterday I sat down to paint along side a small, three-way intersection lined with cafes and restaurants.  Shortly after I had begun, the proprietor of the restaurant nearest where I sat came over and offered me a complimentary glass of tea to sip on as I painted.  He was delighted to have me there!  I have definitely fallen in love.

“Hagia Sophia was constructed between the years 532 and 537 in the city of Constantinople under the reign and by orders of the Byzantine Emperor Junstinian. The Cathedral came to be the epitome of Byzantine Architecture.  It remained the religious focal point of the Eastern Orthodox Church for one thousand years.  In 1453, the Ottoman Turks conquered Constantinople under Sultan Mehmed II and renamed the city Istanbul.  Subsequently, the Church was converted into a mosque.  The bells, altar, iconostasis, and sacrificial vessels were removed and many of the mosaics were plastered over.  Islamic features, such as the four minarets, were added while in the possession of the Ottomans.  For 500 years thereafter, Hagia Sophia served as the principal mosque of Istanbul and the model for many other Ottoman mosques, as is evident in the architecture of the numerous mosques scattered throughout Istanbul.  In 1931 the Church was secularized and in 1935 opened as a museum. 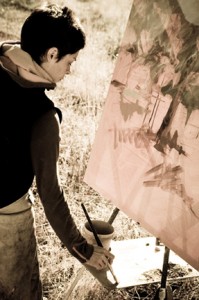 “Currently, Hagia Sophia faces the Sultan Ahmed Mosque, (also known as the Blue Mosque and considered to be the last great mosque of the classical period), with a large walkway and greenspace between.  Sitting with these two architectural splendors on either side of me, I thought of the irony: Christianity and Islam, two religions that have been at each others throats for ages and yet they share a common architectural source for their holiest of places. For that matter, they share a great deal of history, including their fore father in Abraham.  Oh, but if only religions and, more universally, people could move past [their] differences and focus on our commonalities.  Like these two gorgeous buildings, how much more beautiful would the world be[?]”