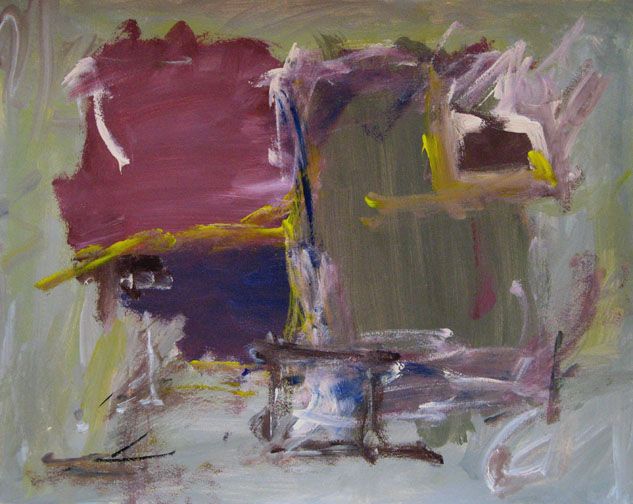 Abstract art is like an inflammation: concentrated at various art market hotspots, but fading in influence with distance from the site of the infection. In Utah — a conservative state, yes, but also the home of a thriving school of narrative figuration — it’s a particularly tough sell. Paul Reynolds, who curates bi-monthly shows at the Wasatch Frame Shop recalls one local gallery that attempted to show abstraction exclusively, which may have contributed to its eventual demise. Meanwhile, confusion reigns internationally in the nomenclature: what is commonly called “abstract” in the U.S. is considered “concrete” in Europe. No Object, the title for the current group show at Wasatch Frame Shop, is also an ambiguous title, but witty, co-opting the criticism that an artwork that doesn’t represent some thing cannot mean anything.

Despite Modernists’ efforts to produce autonomous art that refers only to itself, art –because it is mental work –always works through abstraction. The five painters and printmakers at Wasatch Frame Shop employ a portion of the range of abstraction in the same way visible light covers a portion of the electro-magnetic spectrum, which also includes radio waves and X-rays. Like several Surrealists and later painters, Michael Bernard uses wadded plastic in place of a brush, shaping unidentified organisms that interact with the luminous space they inhabit, recalling how living things alter their environments. He relies no less than Rembrandt on viewers’ stored associations between visual and cognitive experiences, including emotions and spiritual impulses, to give the work personal meaning.

Ironically, many viewers take for granted the work required to recognize and appreciate representational images with specific references, but shrink from the comparatively free and easy work of responding directly to the colors and shapes in paintings like Bernard’s or Bill Lee’s. Lee wants us to respond directly to visual patterns without letting speculation about their identities get in the way. He limits his comments on process to autobiography, answering the question how an image came about by recounting how he put down his camera and picked up a brush. Where Bernard exploits the eye’s impulse to project depth into two-dimensional arrangements of color, Lee’s splashed colors may occasionally interrupt coherent illusions and remind us his canvas is flat. We may project a still life or a landscape onto “Spin Off,” but what is there is the dynamic balance such objects would embody. 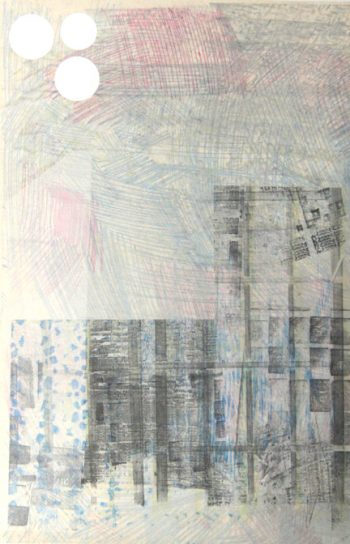 Elsewhere on the spectrum, Tessa Lindsey’s images strongly suggest sources in things she saw, while her titles suggest stories that might explain them: “After We Sell the Villa,” “On Our First Morning,” and “Recapitulation.” Her dark colors reinforce the soft textures and loosely defined forms arranged to convey a sense of rich, vegetal complexity. Though we presume paintings have visual antecedents, these could refer to something heard: music, or conversation.

Joey Behrens continues to examine city life from a perspective with a different mobility than the automobile that shapes it. Humans dreamt of what birds might see long before we could fly, but a map can also suggest a variety of cellular and other structural metaphors, while the archeological layers that build up in cities find natural analogues in frottage and chine collé. Behrens explores how overlapping ways of encoding information produce fragmented experiences that art can reconcile into knowledge.

The wax-filled vaults that open up Sandy Brunvand’s landscapes display a desire to transform detritus into treasure. More specifically, they conjure metaphorical identities. While these relics are “abstracted” from the places where she finds them, while walking the trails outside her studio—in the process surrendering their specific contexts—the painted environments she brings them to abstract what is most characteristic about those places. Along the way she raises questions about how manufactured or otherwise alienated bits of matter find their way back into nature, and why we respond differently to a bit of wreckage than to the “emptiness” that surrounds it.

There will always be those who are convinced that it is harder to duplicate the look of things than to communicate essential experiences unmoored from specific examples—other than the work of art wherein the artist enshrines them. But art is never about how hard the artist works. Is it any more difficult for Picasso to make a mark than says “nose” than for these five artists to make one that carries the scent of their lives? No Object recalls the Latin phrase, Nihil Obstat—Nothing Stands in the Way. These small, soft-spoken images show the continuity between this view of life and any other way these five artists might choose to explore it. Removing the object silences visual noise, allowing us to hear the quiet resonance of our own experience.