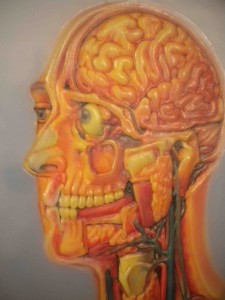 With the North Temple viaduct torn up for resurfacing and closed to traffic, it’s tempting for those coming from downtown to skip the challenge of navigating over to the West Side. It’s a temptation worth resisting, for several reasons. For one, a quick detour past the Gateway complex along 300 North will carry one west across the wilderness that remains of the old railroad right-of-way, then a left at 6th West will bring the adventurous into an area where traffic is bordered by civic-minded mosaics, where underpasses seemingly exist to be painted. If public art has anything to say about community vitality, this should be one of the livelier places in town. Across the street from the massive west end of the viaduct project is the Mestizo coffee shop and gallery, where this month Waxworks showcases the three-dimensional works of Jorge Rojas.

“I want people to touch my work,” Rojas tells the Tribune’s photographer. Then he reconsiders.

In our June issue, Carol Fulton profiled Jeff Juhlin, a well-known gallery and public artist and a leading figure in Utah’s growing encaustic movement. For all his history of transcending borders between steel, textiles, and wax, Juhlin’s individual works slot into conventional categories like ‘sculpture’ and ‘painting.’ By comparison, in Waxworks Rojas mixes multiple approaches in a single work where they are unified by his sense of purpose. Rojas was born in the town of Cuoutla, in the southern Mexico state of Morelos, and first came to Utah when he was 6 years old. Peripatetic years followed: four years at the U of U, three years studying art in San Miguel de Allende, seven years as a gallery artist in New York. With his wife and young son, he seems now to be rooting himself in Salt Lake City, though his ancillary activities as curator and on the board of the Central Utah Art Center keep him moss-free. In the July issue, Geoff Wichert will examine his recent work and try to convince 15 Bytes readers that a visit to Mestizo this month, aesthetically speaking, is really no detour at all.