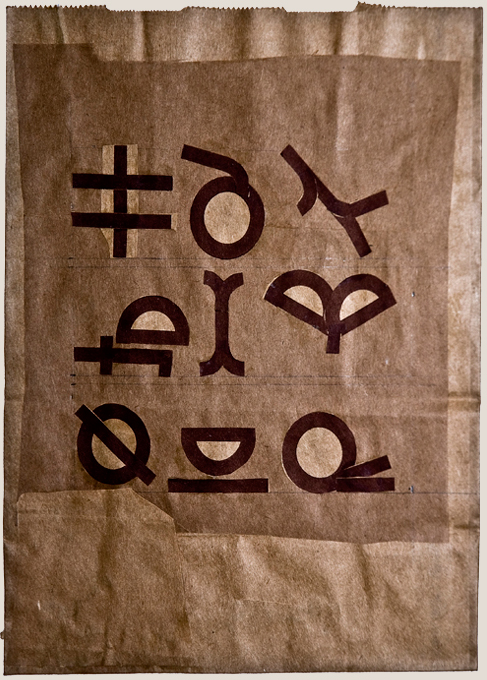 In downtown Salt Lake, at Sam Weller’s book store, past the temptation of eye candy and the brilliantly installed Coffee Garden lies a gem of an exhibition currently on view on the Mezzanine. Artist Richard Zimmerman has taken modern forms – the shopping bag and the book – and turned them into signifiers of forms ancient and eternal.

News from Nowhere spans two sections of the store: the mezzanine on the north and the stairwell leading downstairs on the south. Lining the wall of the mezzanine are striking collages that immediately bring to mind pictographs. My first association was with the Abstract Expressionist artist Adolph Gottlieb and his Pictographs from the 1940s. Zimmerman’s collages have the same feeling of a secret language, of partial and newly created letters waiting to be uncovered. The alphabet is new yet also archetypal. 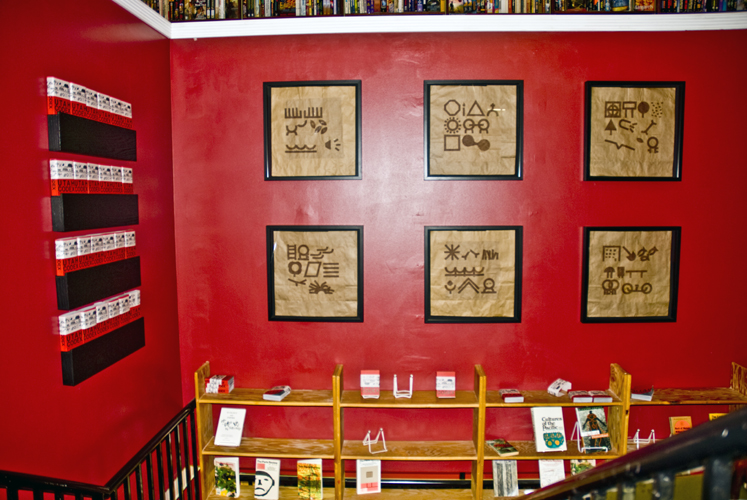 The formalistic quality of the collages is striking – while holding hidden mysteries of language, their design is bold. Zimmerman made use of typographic designs found on brown bags while living in New York City. My association with Gottlieb made sense at first, but delving deeper into the meaning of the show, I kept in mind the title: News From Nowhere. That nowhere is in fact the somewhere we call home, Utah. In this context, Native American pictographs come immediately to mind and the resonance of our place and our history.

Moving to the stairwell for the second part of the exhibition adds another formal punch. Zimmerman’s collages line the walls, and straight on at the stairwell’s landing is a display of small, bound, red books.|2| The vellum binding sports the same pictographs Zimmerman established in his two-dimensional works. The book’s cover reads UTAH CODEX. 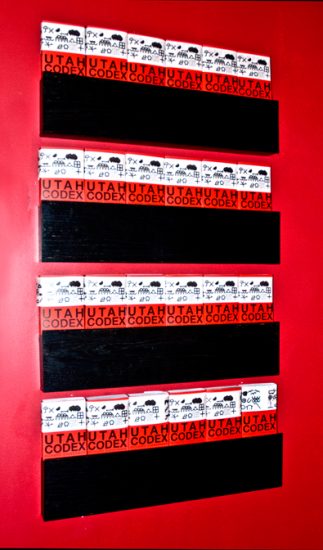 Zimmerman’s book is actually an artists’ book serving as a formal installation and also as a purchasable object (for a mere $25). This multiplicity is brilliant. Not only can you enjoy the exhibition, you can take part of it home. Artists’ books are works of art in the form of a book. The history of artists’ books can be traced back to the Dadaist art movement and the avant-garde rebellion against academic art establishments. Usually produced in small editions, they speak to the ideals of the making the practice and dissemination of art a democratic one. Many artists and artistic movements through the twentieth century have turned to artists’ books as an innovative way to experiment with typography, photography, shape, and form.

Zimmerman’s artist’s statement informs us: “His books are hand bound and comprised of images taken while traveling through Utah…the pictographs are painted on the images with correction fluid.” At first I was a bit disappointed that all images are in black-and-white, but after thumbing through the book, the disappointment evaporated as I found I recognized many of the locations Zimmerman chose to include. Yup, there’s Spiral Jetty, there’s the plane used in the film Con Air, grounded at the air base in Wendover. There’s Salt Lake City’s Main Library and up the road, Eagle Gate. The night shots of Salt Lake valley, in their linear and abstracted depictions of a city grown enormous, are wonderful. There is a rhythm established in the book of alternating abject empty land with equally abject congestion, yet it all makes visual sense. Not all pages have correction fluid markings, or pictographs, overlaid on the photographs. The economy of means used is elegant and delightful each time you see a new sign on the page. 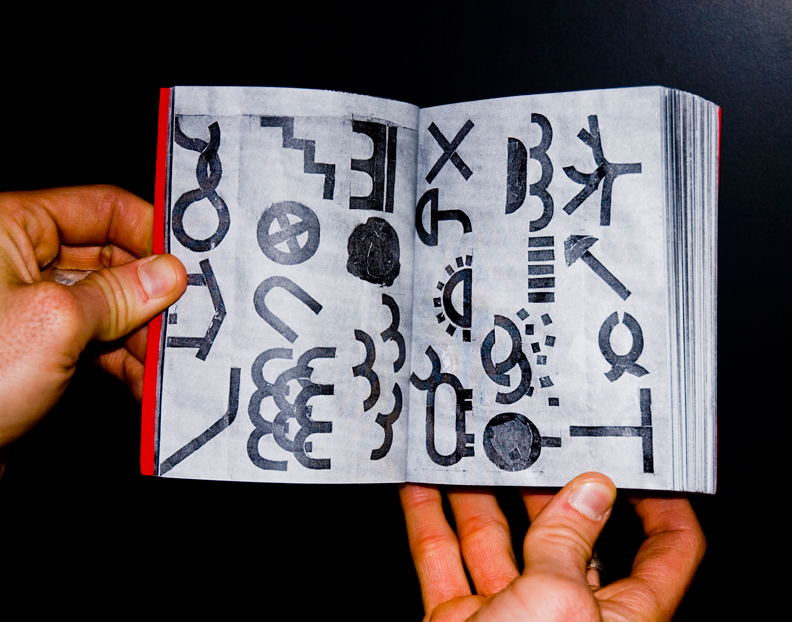 Define the word “nowhere.” Most of us would not consider our grown-up City as such nor the state, with its influx of transplants making Utah their home. Including Zimmerman. Yet by reducing words to mere signs, we are nowhere, free to create our own meaning and language. By stripping the book of text except for the title, we can roam through pages, through landscapes, and feel equally free to inhabit all the forms of nowhere Zimmerman’s camera has captured. The result is minimal, elegant, satisfying, and immensely thought-provoking.

Zimmerman lives and works in Brooklyn, NY and in Salt Lake City. This exhibition is a great cross-over of the influences found in these two geographically and culturally diverse locations. Within Sam Weller’s space, it works brilliantly, giving the book browser yet another way to “read.” Zimmerman’s exhibit is Weller’s first hanging of a solo show. Check it out, it’s worth the journey. 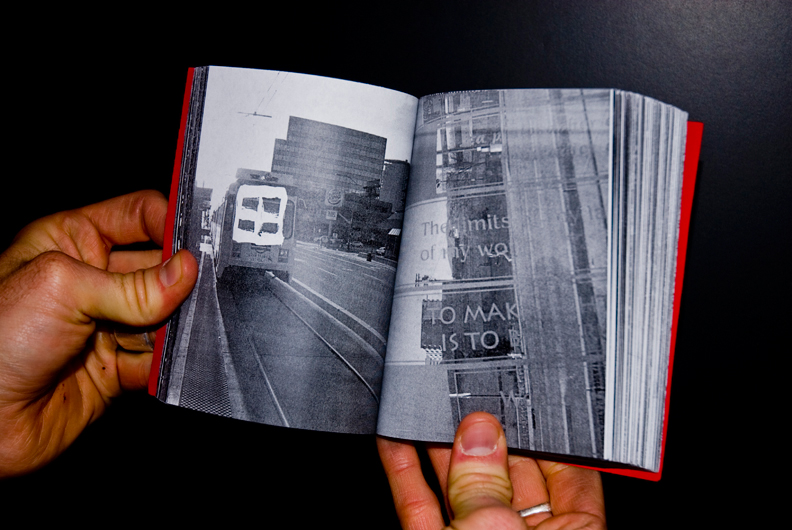