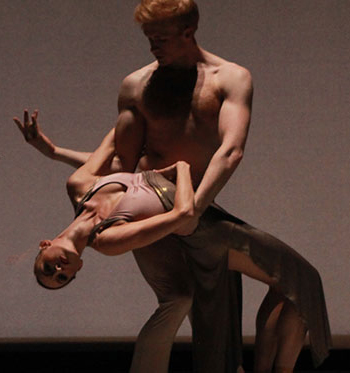 Each year Ballet West puts convention aside for “Innovations” and this year’s concert is no exception. From a visibly pregnant Katherine Lawrence adding depth and complexity to “The Sixth Beauty,” by guest artist Matthew Neenan, to Arolyn Williams leading audience members on pedestrian pathways in a premiere by company member Chris Anderson, the show challenges patrons to experience ballet in new ways while also relating the company to a larger community of dance makers in the contemporary moment.

Some new relationships were forged through the abandonment of traditional ballet structures in favor of more loosely linked movement structures. For Tyler Gum’s “Inverted Affect” this meant dancers performing movements alongside a tilted mirror which duplicated the imagery from each performer while physically and conceptually expanding the stage space. For Chris Anderson’s work it meant more traditional partnering happening amid of stream of Ballet West patrons in walking pathways while performing some unison movement to frame the action. Although an atypical corps de ballet, the participating audience members served that function as they drew the eye to and from the pas de deuxs they surrounded. While both dances shared visual design and concepts popular in modern dance history,  in this context they were a fresh juxtaposition to the postures and sequencing one might expect of Ballet West. Each gave the audience a glimpse into the curiosity of classically trained artists who are keen on exploring new points of view.

For other pieces on the program, the formalism of ballet remained and instead the challenges came from the selection of highly personal narratives that contrast the story ballets or abstract contemporary pieces which populated Ballet West’s 50th Anniversary Season.

Christopher Ruud’s “Great Souls” explored the dynamics of many of his interpersonal relationships including his divorce and the death of his father. Because so many in the audience are also watching the reality show “Breaking Pointe” and feel not only like they know intimate details of Ruud’s plot but also the lives of its performer’s dancers as well, a palpable tension could be felt in the room. Pushing that tension to the side, the dance aptly presents a highly technical and musical investigation of those that greatly influence us, and our decision-making, during our lifetime.

Matthew Neenan also utilized personal narrative in his work as well as more abstract gestural material within traditional ballet structures. As mentioned above, the pregnancy of Katherine Lawrence breathed life into the dance allowing the audience to experience the partnering in a unique way — both the awe at the ease with which she performed but also the reminder that those performing the ballet are quite real people with lives beyond the stage that influence their craft.

Ballet West has invited many guests to take part in “Innovations” over the years, including Helen Pickett, previously of the Frankfurt Ballet. But the program, however innovative, primarily consists of male choreographers. Ballet West’s Emily Adams has been, more than once, the only female choreographer taking part in “Innovations” and each year she takes part I find her work to be incredibly detailed and thought-provoking. A few years ago I noted that her highly musical and witty piece was among the most interesting on the concert and this year she took a different direction with more ambient sound and abstract visual design. I leave wondering whether she is the only Ballet West woman to take up the charge due to a real lack of interest, and certainly don’t think Ballet West’s platform lacks encouragement of all artists in its ranks, but it does warrant reflection that even in this open format we continue to see male thinking and female-centered performing.