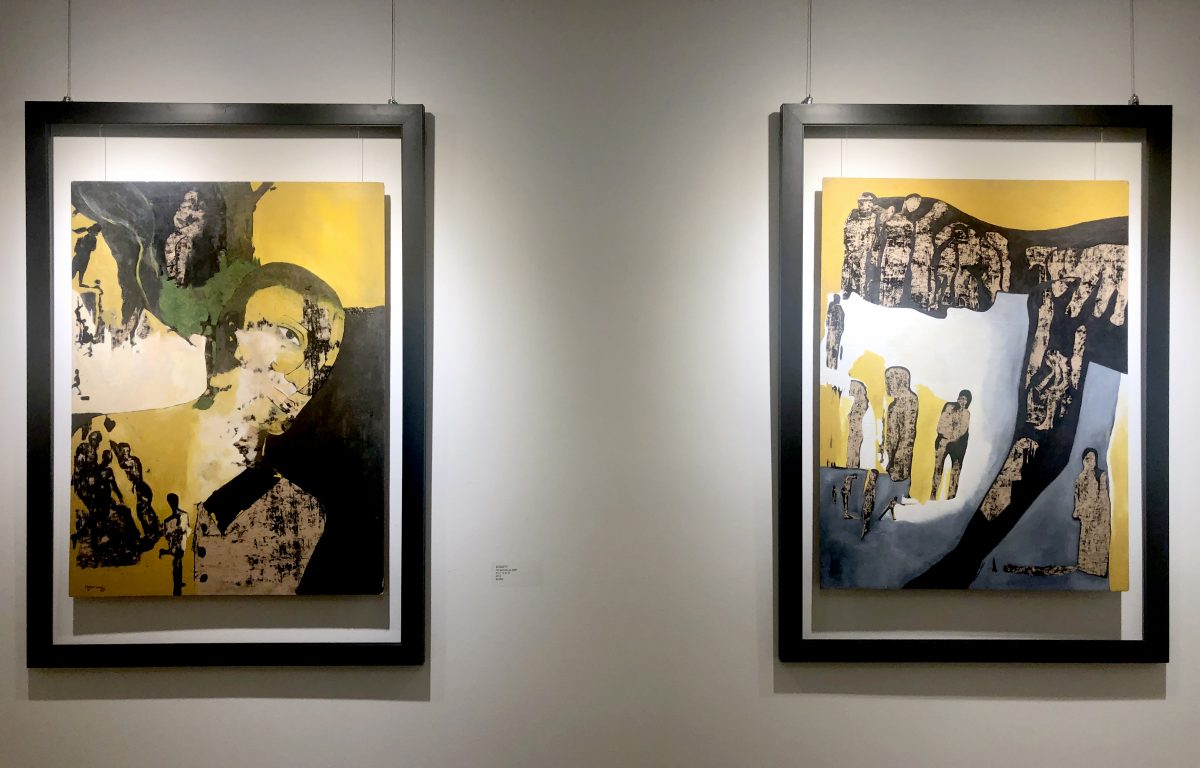 “In Society” (left) and “The Observer” (right) at The Alice Gallery

Together, two paintings hanging side by side in the Alice Gallery illustrate the paradoxical nature of language in general and titles in particular. Each features a large, single figure juxtaposed among smaller ones, and each is identified by a particular word. In “Society,” scale separates the lone figure from the many, so that the subject can be seen to be “in society,” but not necessarily a part of it. Reference to the group serves primarily to call attention to the alienation of the individual. In the other, a looming, horizontal figure, having absorbed some of the figures, hovers over the rest. This is “The Observer,” and the combination of title and composition serve to shift attention from this ominous figure, who is more a presence, a part or force of nature rather than a subject, to the objects of its gaze. In an authoritarian society, the significance, the threat of the observer is clear. Where the word “society” directs attention to the individual, the word “observer” redirects focus to the many under scrutiny.

The artist, Negar Monaghy, an Iranian woman who struggled under an authoritarian regime until she immigrated to the U.S. in search of freedom of self-expression, has not only authorized such readings of her painting in comments made on her art, but has identified and even indicted some of the oppressive powers portrayed in her remarkably expressionistic images. She has described “feeling like an outsider” while growing up and traced her alienation in particular to never having had strong religious feelings. While to be sure, there are many places in the U.S. where her lack of religious conviction would be every bit as unpopular as it was where she grew up, she benefits here from two circumstances: first, there are eloquent Americans who share her detachment from religious dogma, or at least agree with the founders of this nation that no one should be required to observe an established religion; and then there are those who might take pleasure in sharing what they see as her opposition to a specific, minority branch of the Muslim faith. They take the attitude that “the enemy of my enemy is my friend,” a tautology first formulated among European royalty around 1700 as “Amicus meus, inimicus inimici mei.” 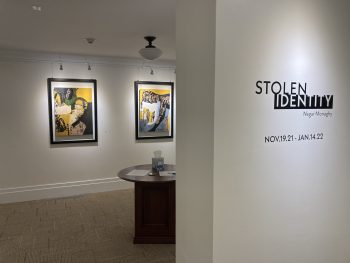 Works of art routinely invoke such philosophical, political and social issues. It’s important to keep in mind, though, that such content is often specific to a time and place. Mohaghy’s overall title, Stolen Identities, for example, means something very different to her than it may to we who live in a capitalist paradise, where “identity” has come to mean the codes that access our bank accounts. The identity theft Mohaghy refers to is closer to that which victimized slaves, who were routinely denied individual identities as persons. The revolution that liberated those slaves remains incomplete, and for that reason their status, as exposed in the Black Lives Matter movement, comes closer to what actually inspires these artworks.

Meanwhile, the important quality in art, the thing that transcends temporal and cultural limits and makes it matter ultimately, is the sheer power of its aesthetics. The artist’s audience at the Alice Gallery will know she means an identify theft that genuinely threatens her life, not just her livelihood, in part because they are educated about current lives and what differentiates them, but also as a result of time spent contemplating a range of artworks that not everyone has access to. And the artist has matching skills, which she developed in part during a background in art therapy, a relatively new contribution to art that combines narrative with memoir, confessional and something that falls between inquiry and accusation. 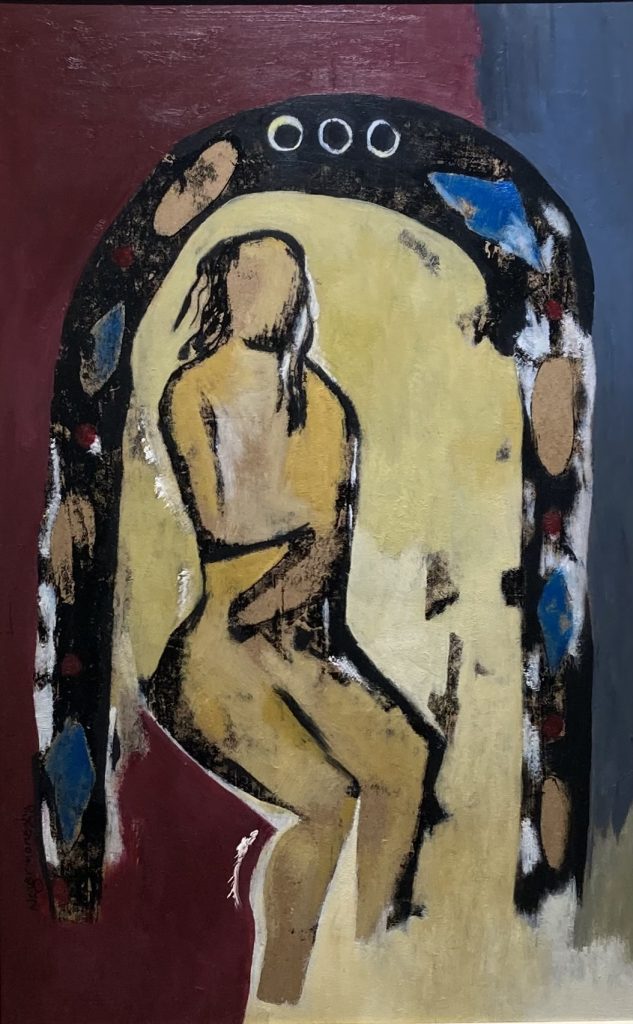 Take, for example, “Mirror,” one of the first paintings seen on entering the gallery. There was a time, before “influencers” took to circulating sex tapes, when the act of exposing oneself meant something: the loss of something. Think of Lady Godiva. Mohaghy’s self-revelation shows her not as an erotic or otherwise commanding figure, but as she finds herself, stripped of material shields or signifiers, and yet surrounded by ghost-like faces — presumably persons in her past that she may or may not have known in person, some ornaments that might be the cameras that probably watched her on her relatively rare excursions into the public sphere, and what I take to be unreadable faces that even in this private space are watching her. The observer indeed. I’d say more, but I don’t think I can add anything to your own response to this invasive assault.

In contrast to “Mirror,” the next painting, “Strong,” presents a very different image of a woman. Here, instead of covering herself with her arms, she gestures towards her suprasternal notch, which is about as close as one can come to pointing to her essential self. Her undraped form contrasts with that in “Mirror” only to show that she feels proud of her womanhood — as both women are entitled to feel. At the same time, the painter’s technique has given her a look of having been chiseled from stone: a rugged and durable physique, not one that is frivolous or fragile. 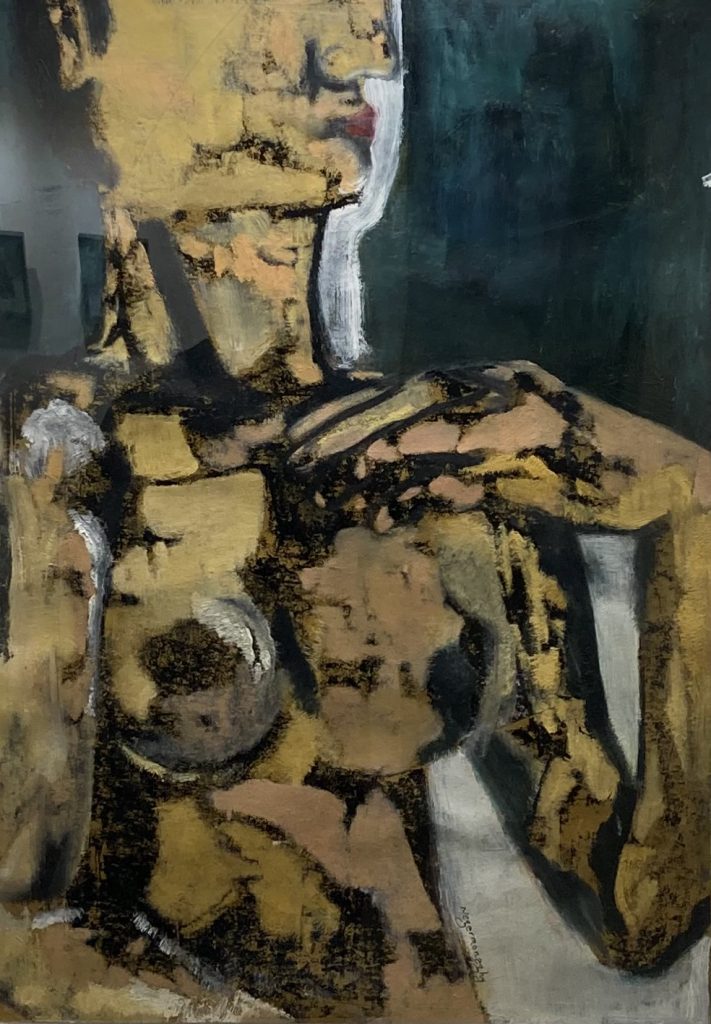 The sculptural quality of these particular images, and in particular one titled “Thoughtful,” calls to mind perhaps the only sculpture as well-known and widely admired as “Mona Lisa”: Rodin’s “Thinker.” It was originally “The Poet,” and it was intended to portray Dante, and yet its powerful physique and determined posture hardly jibe with Dante’s life experience as we know it, as an outcast who wrote so movingly about spending his life in exile. From the English translation at Bartleby.com:

this is the first shaft
Shot from the bow of exile. Thou shalt prove
How salt the savor is of other’s bread;
How hard the passage, to descend and climb
By other’s stairs. 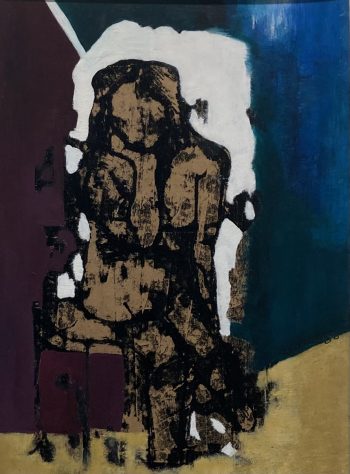 Unlike Rodin’s, but very like Dante, Mohaghy’s figure really seems to be contemplating her options and their likely consequences. Sitting on a chair, her body turned to the side and her head resting on her palm instead of the back of her hand, she seems less in denial, more truly thoughtful. And the painted background, the deep purple and blue common to all three of these paintings, here suggests a corner that waits for her to turn it.

There are some twenty paintings here, each of which rewards immersion in the complexity of its mood, present in the colors, its often ambiguous composition, and the expressive highlights and shadows. Any felt uncertainty is not a trick; only those whose lives are free of duress can be certain about when the bread is too salty.