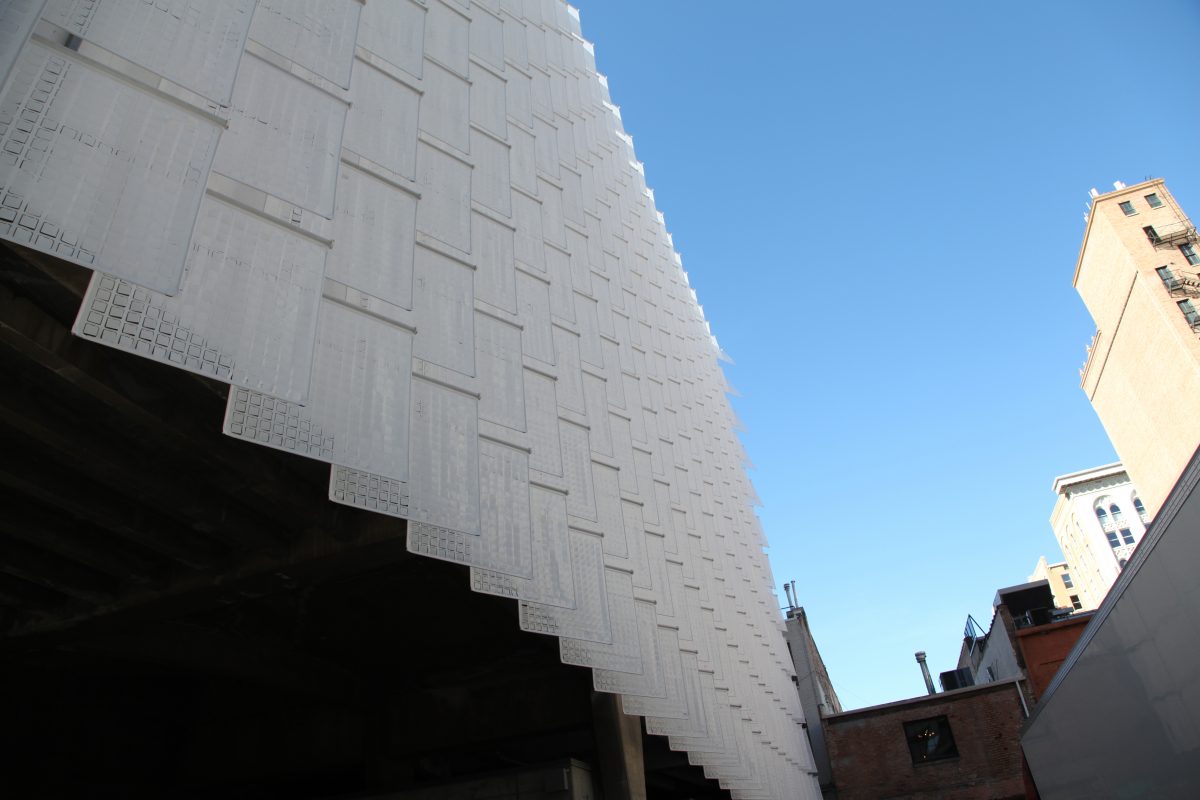 Parisians hated the Eiffel Tower when it first went up. They weren’t crazy about I. M. Pei’s Louvre Pyramid, either. Both, however, have become iconic landmarks. Tourist attractions. Destinations in and of themselves. And that’s what Salt Lake City is counting on with Ned Kahn’s “Pages of Salt,” a public art installation unveiled this past month in the heart of the city.

“Pages of Salt” is the culmination of The Redevelopment Agency of Salt Lake City’s project to revitalize and reimagine Regent Street. A decade ago, it was little more than an alleyway between parking garages. Now, it’s a mid-block corridor connecting City Creek and the Gallivan Center by way of the new Eccles Theater. At the unveiling for “Pages of Salt,” Mayor Jackie Biskupski predicted the piece would “quickly become an icon of downtown,” activating the space and drawing people into it. Amy Fowler, RDA board chair and a Salt Lake City Council member, noted that love them or hate them, public art projects attract crowds. And attracting crowds to downtown is what the city is after.

The Salt Lake Arts Council’s announcement of the unveiling touted “Pages of Salt” as the “largest single piece of public art in Salt Lake City.” It may be the largest in the state. At $2.2 million, it is also the most expensive — a fact remarked on by local news outlets and sure to remain a point of controversy whenever the work is discussed (for those discussions: the per-resident price comes to a little over $11).

Knowing how much (or, rather, little) Utahns are inclined to pay for art, the price tag would probably have been a sticking point regardless of the work selected. And that selection was not easy. From the initial pool of 182 applicants in 2015, the Salt Lake City Design Board, a volunteer group of seven, originally chose Janet Echelman’s proposal for an overhead fiber sculpture. When that fell through due to disputes about timeline and budget during the administration of Mayor Ralph Becker, the board returned to the process. For the second round, they chose a digital projection piece by L.A.-based artist Refik Anadol, but the ongoing maintenance and utility costs for that one had Mayor Jackie Biskupski’s office nix it. Knowing the clock was ticking on the bond to pay for a Regent Street art piece (there was a three-year limit), the design board had also chosen a backup proposal from one of the original five finalists: Ned Kahn. 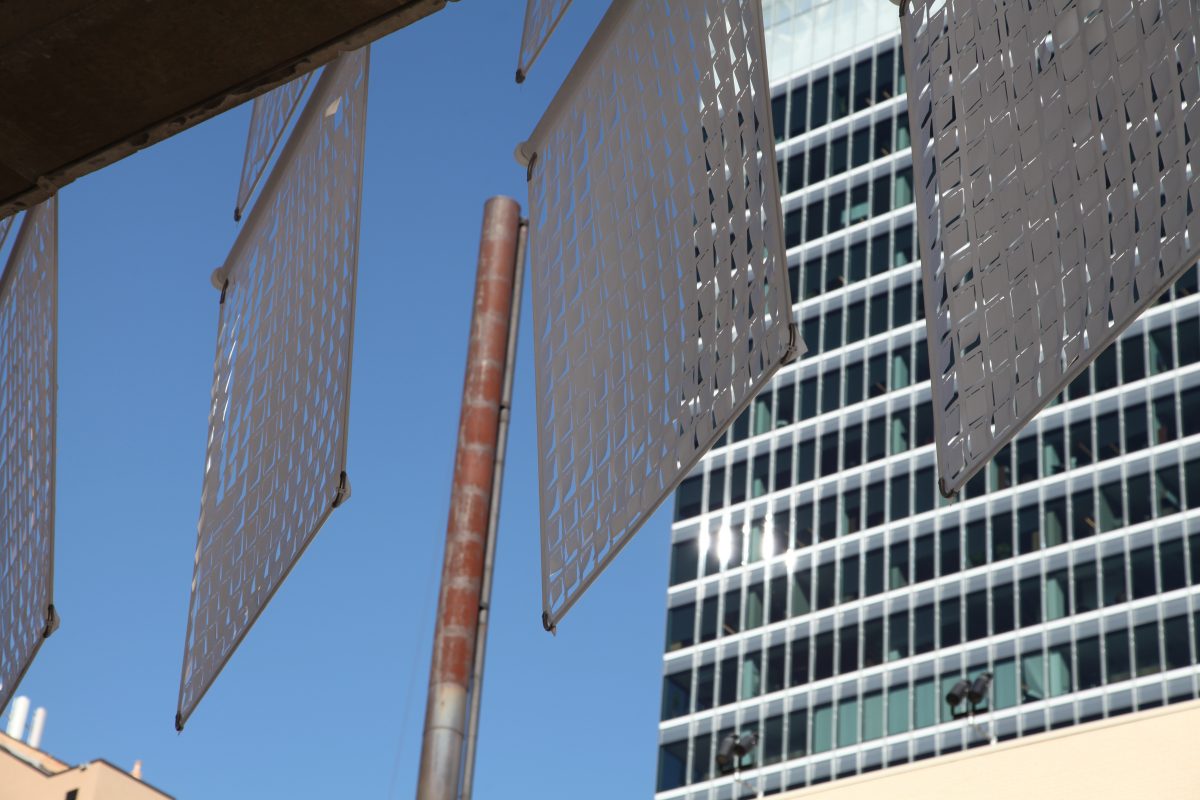 Kahn has made an international name for himself creating kinectic sculptures and installations that react to elements in the natural environment. In places like Pittsburgh, San Francisco, Singapore and Belgium, he uses elements like wind, water and light as much as steel and plastic. A recurring motif has been the use of wind with hinged pieces of material to make the invisible visible. The effects can be mesmerizing, as the side of a building seems to come alive, shivering and shimmering in the breeze. “Pages of Salt” is a work in this vein, a wall of 336 white flags, sewn to resemble both salt crystals — in honor of the Great Salt Lake — and sheets of drying newspaper — a nod to a bit of Regent Street history: the printing presses for The Salt Lake Tribune and Deseret News used to be there.

At the unveiling, in the calm air, the piece literally fell flat. Move around it and you might get some pleasure from seeing the salt crystal perforations framed by the blue sky, or catch the piece’s reflection in a nearby building, but these effects were subtle. On the day following the unveiling, when gusts of wind were blowing leaves off trees by the rakeful in Washington Square, the movement of “Pages of Salt” was still lackluster. It took time to notice that while most of the flags lay flat, the upper corners of the piece, barely touched by the sun, were also lifting subtly in the wind.

Subtlety is an attractive quality in much art, but usually not public art. Eiffel’s tower and Wei’s pyramid were controversial precisely because they were not subtle. It’s also why they are such identifiable landmarks, aided of course by large public plazas that help call attention to them. By contrast, very little in its environment calls attention to Kahn’s piece. The only sightline comes from within the Eccles Theatre, or traveling south on Regent Street, but even from these vantage points, you might miss it: the rows of white flags blend into the wall of the parking garage they are attached to. That wall is north facing, meaning it will receive little sunlight. Also, while McCarthey Plaza may be used as a community meeting space for special events, it also serves as a loading dock for the Eccles Theater: the day after the unveiling, Kahn’s piece was foregrounded by a couple of large trucks.

Jann Haworth, one of the two artists on the city’s Design Board, sees the subtleties of Kahn’s piece as an advantage. “The visitor has to earn his or her experience with this piece just as you have to earn — with hours and hours of mountain biking or hiking — your first sight of a Lynx or a 50-year old tortoise or yellow aspens in snow,” she says. “The piece can seem stubbornly still and no matter how much you want to see it move, it won’t. Then there will be a windy day that normally you would find annoying when it will occur to you to take a detour walking or driving to just check out what the wind is doing to this piece. And then the first story of your unique moment with the piece will happen. There will be few tedious selfies of the piece but thousands of stories.”

The wind, ultimately, will be key. But hemmed in on three sides by tall buildings and accessed by a narrow street, McCarthey Plaza is not as promising as many of the venues Kahn’s other pieces have been installed (one can imagine how magical a Kahn piece would be somewhere more exposed, like at Saltair). The effect of light remains to be seen: a high summer sun may cause the normally shaded Teflon flags to glow. And when “Pages of Salt” does ripple, it may have a magic quality, as if that wall of the parking garage has come alive. But you’ll need to be there to see it.

Once people forget about the price tag, they may forget about the piece as well, and a work of public art has to be noticed to be loved or hated or visited. Only time (and weather) will tell, but it seems unlikely the piece will satisfy the city’s desire to draw big crowds. Its success as a work of art is another matter, and it may come to mean much to the patient few. 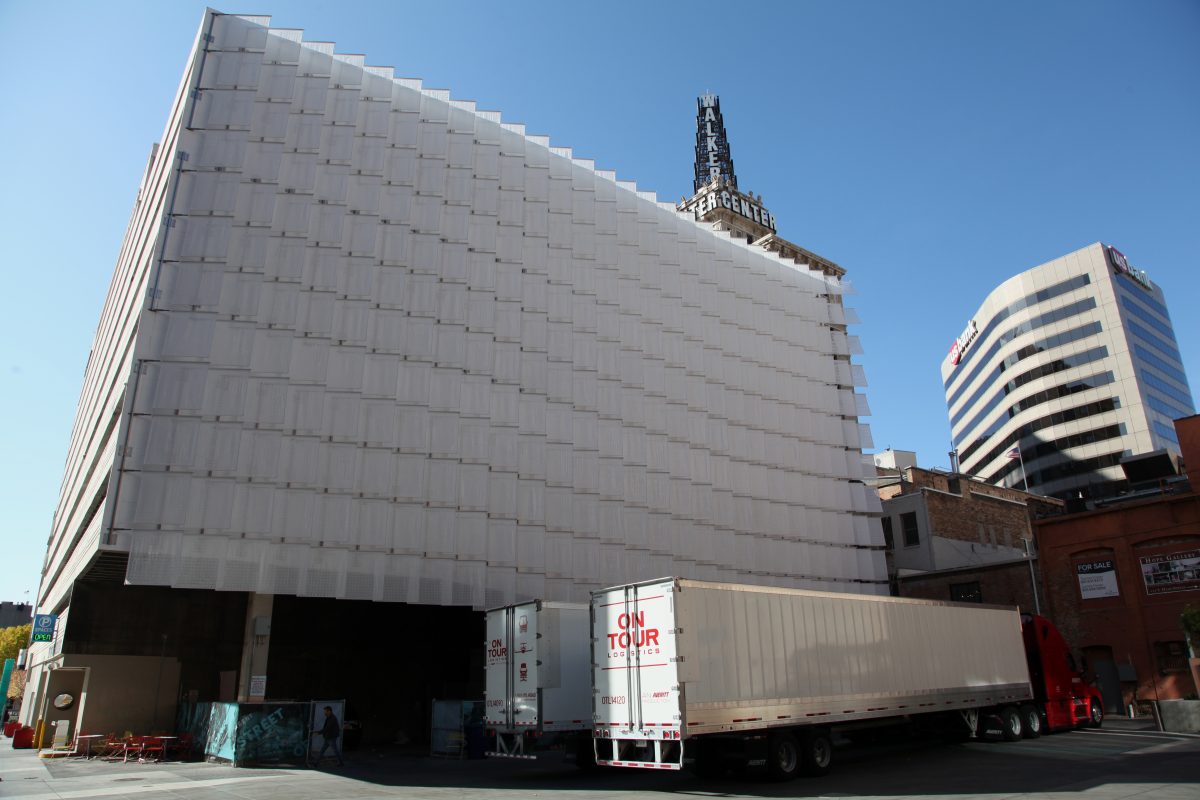