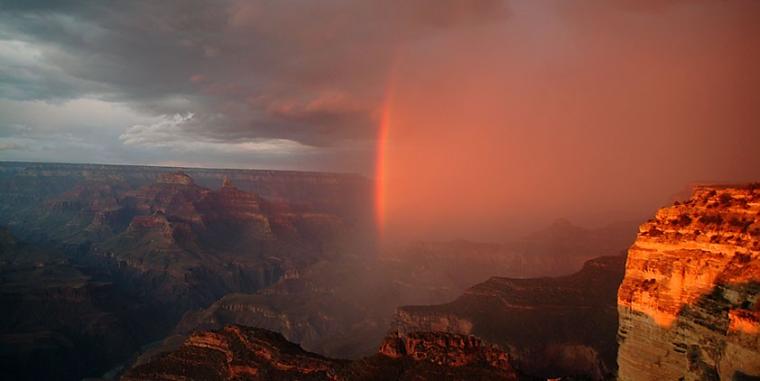 On Monday, March 14, KUED will air the first of what will be a trilogy of films commemorating 100 years of the National Park Service. The trilogy, called Year of the Parks, begins with “National Park Symphony,” a visual portrait (or music video, depending on how you want to look at/listen to it), starring the five national parks featuring music by the Utah Symphony under the baton of music director Thierry Fischer.

The film was inspired by the symphony’s “Mighty Five” tour in August 2014, during which the orchestra performed against the backdrop of Utah’s five national parks, both as a prelude to the centennial of the National Park Service and as a celebration of the orchestra’s 75th anniversary.

The film is a feast of visual and musical beauty. The music will sound familiar to many; most of it is quiet and contemplative. It’s the kind of music you would want to listen to as you sit still and close your eyes if the visuals accompanying it weren’t so darn gorgeous. Photographers Gary Turnier and Nick Vincent shot the scenery over four seasons at the parks, with additional footage from John Howe. Those who visit the parks regularly will see some familiar vistas and maybe some secluded spots they haven’t seen yet, and those who have never been might be inspired to start planning their next road trip.

The project was made possible, in part, by the state of Utah. Governor Gary Herbert is a proponent of Utah’s national parks and the Utah Symphony. According to the governor, this collaboration perfectly embodies Utah’s tourism slogan, “Life Elevated.” Utah Symphony fans will feel proud to see their beloved orchestra paired with such renowned natural beauty. The musicians also were proud to be part of such an ambitious project. “It’s a tremendous honor for us to have our music paired with the unsurpassed beauty of the natural landscapes of Utah,” says Mercedes Smith, principal flutist of the Utah Symphony. “The music, combined with the incredible cinematography, elevates our stunning parks to a truly majestic level.”

The serene musical selections by Debussy, Dvořák, and Ravel are sewn together with interludes of silence, filled only with the sounds of wind and native inhabitants of the parks. However, not all music is quiet and serene, just as not all scenes from the parks are full of peace, harmony and calm. When dramatic storms move across the sky, or mountain bikers race along the redrock, selections from Olivier Messiaen’s “L’Ascension” might raise your heart rate as anxiety replaces the tranquility you were feeling earlier.

Purists might question the need for music to be accompanied by visuals, or for beautiful scenery to need a soundtrack. Perhaps each art form should be perfectly capable of speaking for itself. There is truth to that, but there is also truth and undiscovered value in collaboration. As Utah Symphony Music Director Thierry Fischer admitted in reference to the Mighty Five tour, “This experience fills a part of me I didn’t know was empty.”

National Park Symphony was shot on location over four seasons in Zion, Arches, Bryce Canyon, Capitol Reef and Canyonlands national parks. It was produced by KUED’s award-winning Carol Dalrymple. It will air on Monday, March 14 at 7:00 p.m. and again at 8:30 p.m. on KUED Channel 7. Click here to preview the documentary.