Our relationship to the environment, notions of fatherhood, patriarchy and violence, and the way one can come to live by language appear in the poems of the finalists for this year’s 15 Bytes Book Award in poetry. Nancy Takacs’ “The Worrier,” a collection of interior dialogues coming to terms with the physical world, has been awarded the top prize by this year’s judges (see our review here). Adam Giannelli’s “Tremulous Hinge” and Mike White’s “Addendum to a Miracle” are named as finalists for the prize. A reading/award ceremony for the winner and finalists will take place at The Printed Garden in Sandy, Oct. 17, 7-8 p.m., as part of this year’s Utah Humanities Book Festival. The event is free and open to the public.

For the annual prize, presented by Artists of Utah, nominations were accepted for professional, independently published books that appeared in 2017. Three guest, Utah-based judges were tasked with ranking nominations based on artistry/writing, and “that indefinable quality that makes a book special and unforgettable.” Judges also ranked books based on their connection to Utah in theme, setting or the residence of the author; however, the third category was only activated in the case of a tie.

Currently in its sixth iteration, the 15 Bytes Book Awards are the only statewide literary book award for adult fiction, poetry, and creative nonfiction. The awards also recognize excellence in publishing in the category of art book. 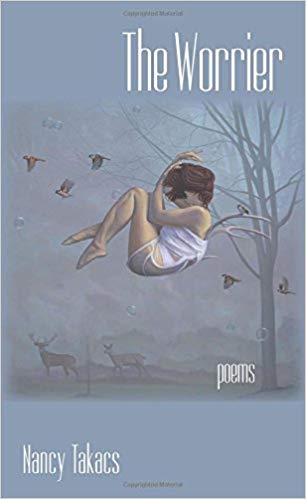 Winner: “The Worrier,” by Nancy Takacs

In her brilliant new collection, “The Worrier,” Nancy Takacs has presented her readers with her most finely nuanced and psychologically sophisticated collection of poetry to date.  Each piece is an inner dialogue, a meditation, an experiential episode that seems to reveal the true nature of our relationship with our environment fragment by fragment, as we struggle to come to terms with our place in the physical world.  There are two voices — the worrier and the answer — and Takacs’ worrier is presented in diametric opposition to the natural world, and to its processes.  The natural world moves forward with wildness, sometimes purely instinctively, and sometimes without any apparent impetus. Takacs seems to point out, by way of this collection, that it is our intellect, that inner voice in which we place so much trust that frequently confounds us.  We are apparently, by nature, unable to trust the design and wisdom of the kingdom into which we’ve been born.  We are constantly sabotaged by our rebellious sense of self-importance, and by our insistence that the natural world is something that we can, somehow, bend to our will.  But our determination to understand the natural world only in our own terms will only result in the muting of the wisdom of the earth, and will leave us nothing but our own noise. An extraordinary addition to this poet’s oeuvre. 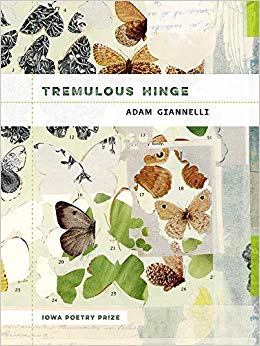 Adam Giannelli’s “Tremulous Hinge” is a portrait of the poet making a choice to live by language—language that, like the rest of life, doesn’t always come easily, that may come in fits and starts and stutters, as we see in the first poem of his collection, but is all the more beautiful because born of struggle. Giannelli embraces what can be said, and he says it sonically, as we understand it aurally; his poems insist on being read aloud. “A group of men corral dominoes on a table./ On the citronella candle, a flame glistens/ like the tip of a paintbrush/ dipped in amber. It fans out, flattened in the wind, brush on canvas—“ a visual metaphor that is best understood aloud, “when listening/ to them/ is enough.” The poet’s pen, too, burns with a flickering, stuttering flame, random trace gases having their say as they burn away, his focus not on the thing itself but on its edges—not the wave, but the foam at its edges; not the building, but the shadow ensnaring one side; “not the field so much as the deer”—the bright [and dark] minutiae/ in the universe.” Every would-be poet attempts it, but only the best succeed: Giannelli makes us “shudder/ with the simplest words.” 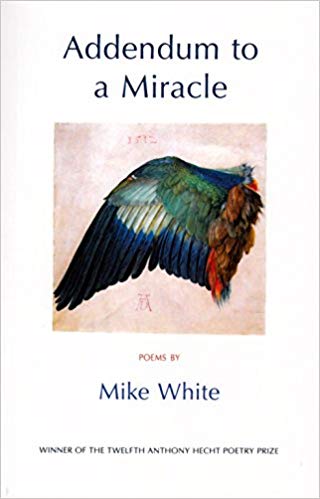 Finalist: “Addendum to a Miracle”, by Mike White

The poems in Mike White’s “Addendum to a Miracle” explore complex notions of fatherhood, patriarchy, violence, and self with an understated yet sharp gaze. That gaze delineates thresholds of dark and light — the body pressing its “weight/ against the big revolving door,/tumbling into the sunny afternoon,/mildly stunned that it’s there.”  Several of White’s poems are haikus or similar in their spareness that hides what is unspoken. The words create silhouettes on a page and lines range from ethereal to corporeal, from “in the shadows/of the ferris wheel/bright hints of deer” to “my son insists/I am a father/and he is a brown bear./It goes this way./He gets hungry/and by and by/I am chosen.” The poems’ images often rest on the cusp of invisibility and apparition. The endings of the poems are not static, but instead leave the reader at the entrance of an open door. Yet what do final lines open into? Both the existentialism of “white space” (a pun?) and “God’s/good eye/waiting out the rain.” These images that seem opposite give keys to reading the poems–presence and absence coinciding on a tightrope.

Our thanks to all of those who nominated a book. Our thanks also go to the judges and the interns who helped us pull off this volunteer-driven program. We hope that the public and especially the literary community in Utah and beyond will consider joining this enterprise. A donation to 15 Bytes’ many literary programs including its Read Local Onsite and Read Local Sunday, can be made by using Venmo to send a donation to @Artistsofutah or using to following link to donate via Paypal/credit card.