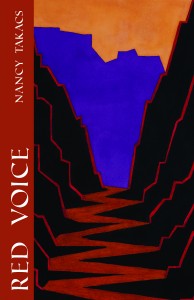 The myth of Echo as we know it appeared in Book III of Ovid’s “Metamorphoses.” She was a mountain nymph, part of a group with whom Zeus liked to dally. Whenever Zeus’ wife, the goddess Hera, attempted to find her husband during these interludes, she was distracted by Echo, who would engage her in conversation and give Zeus time to escape. Hera eventually figured this out and cursed the nymph with a speech impediment: she would never again be able to initiate conversation and could speak only the last words that she heard.

As if that were not enough, she falls in love with Narcissus, who spurns her and falls in love with his own reflection. Throughout the myth, Echo is acted upon by external circumstances rather than taking a more active part in her own life. At her death, she turns to stone, becoming part of her beloved mountains with only her voice remaining, repeating the last words of those who traversed among the peaks.

Nancy Takacs’ Red Voice presents us with a reanimated Echo. She’s found her voice and lives in the desert Southwestern United States happily engaging with nature and, especially, with humanity. She cooks, swims, converses – unlike her myth — she actively engages in her surroundings with a new joi de vivre. There are some allusions to the original myth, beginning with the table of contents. Each poem title begins with the word “Echo.” This gives a sense of the repetition of her name being repeated across the space of a mountain canyon as well as across the millennia.

The first poem in the collection, “Echo the River Guide,” begins with Echo joyfully singing about her restored power of speech:

When I spoke words, they were
awnings of balsam, bathing
the woods in a psychedelic show…

They were simple, carried out to the point of rapture,
dropping seeds
to plant on the fig of my tongue.

Throughout the book, there is a joyful synesthesia, where words are scarlet and vermillion, woods become psychedelic or dangle like a “star sapphire under the moon.” The image of words planting seeds on “the fig of my tongue” evokes the visceral difficulty of speaking after a long silence as well as the sweetness of the fruit in a mouth no longer arid with silence.

Throughout the collection, there are fragments of the original myth of Echo but they have been inverted, recast into a new story reflecting the new circumstances of her life. She is no longer confined to Mount Cithaeron in Greece. She wanders the wild areas of the Southwest from Dark Canyon, Utah, to the Mogollon Rim in Arizona. She has a lover, but unlike Narcissus, this unnamed lover does not spurn her. In this new myth, he becomes the tongue-tied participant.

He brings me news of eye-stinging air,
inversions over valleys. I think
this moment is the key. I show him
how to make chicha to whisk
away his sadness. He says
he will not speak until
it improves on silence.

In this new myth, Echo acts upon her lover who is distraught at the condition of the environment. She teaches him to make chicha, a Mayan beverage used as a calming agent, to relieve his sadness. Interestingly, imbibing chicha has religious overtones, but these gods are different and their medicament is benevolent. There are no curses or spells, no damage done by angry deities. In the end, he is the silent one but he remains, unlike the haughty Narcissus.

Red Voice is more than a simple retelling of an ancient myth. Ovid’s Echo is a character punished to the point of despair. Her only legacy is the sound of one’s words repeated among the mountains. Takacs has taken this myth and rejuvenated it with a character reborn in a new world, reaching out to her new life with the enthusiasm of a caged bird freed into the wilds of an exotic paradise.

This is a well-crafted collection. With the reading of each poem one roots for this newly transformed Echo. Her enthusiasm for her surroundings is infectious and, eventually, we become as excited. Few books can convey this.