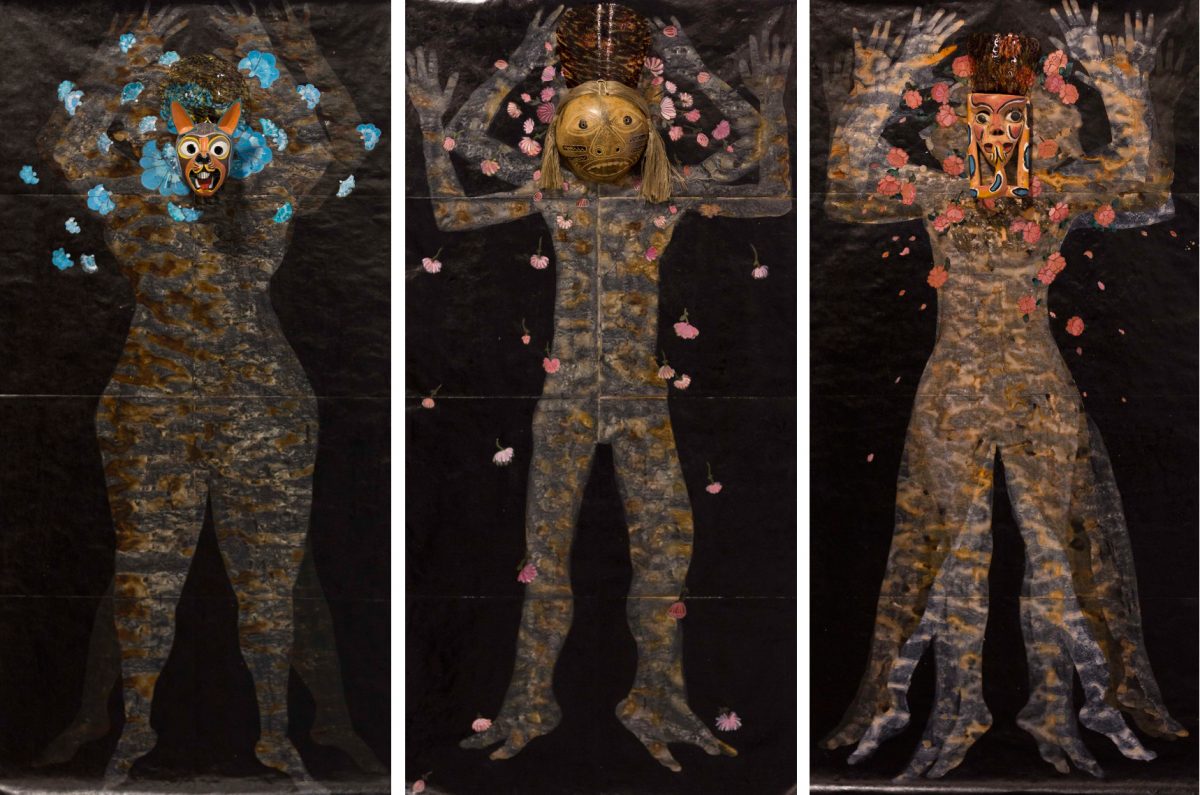 In the darkened gallery they float like apparitions, life-size outlines of figures captured in poses that shift between submission and aggression, carved masks sprouting from their flattened surface suggesting fear, defiance, bafflement, awe. Nancy Friedemann-Sánchez’s Casta Paintings, currently on exhibit at the Street Gallery of the Utah Museum of Contemporary Art (UMOCA), are haunting works, seductive and unsettling at the same time.

A Colombian artist now based in Lincoln, Nebraska, Friedemann-Sánchez is the recipient of the 2019 Catherine Doctorow Prize for Contemporary Painting, an award, now in its 5th iteration, presented by UMOCA and the Jarvis and Constance Doctorow Family Foundation. Past recipients of the $15,000 cash award have exhibited stained wool rugs, architecturally-inspired wall drawings, politically-charged paintings of headgear and stop-action videos. And now … these delicate, brooding works that crossbreed colonial art with contemporary issues of migration and identity.

Friedemann-Sánchez has titled her series after the “Casta” paintings that came into vogue in New and Old Spain in the 18th century. These genre paintings were executed as a series of sixteen works, or a single panel divided into 16 quadrants, each quadrant or painting depicting a man, a woman and their child. In the age of the Encyclopedists, the Casta paintings were meant to illustrate the racially stratified colonial society — with its mixture of Criollos, indigenous peoples and African slaves — that gave birth to terms such as Mestizo, Mulatto and Morisco, terms which provide the titles for Friedemann-Sánchez’s works. You may see few resemblances, however, between Friedemann-Sanchez’s paintings and their predecessors. Friedemann-Sánchez’s works feature single individuals rather than family groups, and the rich ethnographic details of clothing, food and tools used in the originals to denote occupation and social status, are absent in these seemingly naked figures. The masks, each topped by a traditional Spanish comb, are from Latin American sources, but share little in common with the tone of the original Casta paintings.

The daughter of an American father and Colombian mother, Friedemann-Sánchez has lived and was educated in both countries, and continues to travel between the two, passing through the most common of contemporary borders, the airport terminal. The figures in these works are drawn from Latin American women the artist knows in Nebraska. They are depicted with arms raised, legs spread, in the stance of a TSA body scan. Some works show the figures with single pairs of arms and legs, but, in others, multiple pairs of appendages appear, giving them a Kali-like appearance. With their arms raised, the figures may be read as aggressive, like the Hindu goddess, or submissive, as if declaring “hands up, don’t shoot.” The masks, which stand in the place of a face and are each very different from the others, are similarly ambiguous: they give identity to the flat bodies, but is it an identity that reveals or conceals?

The original Casta paintings likely grew out of a sense of anxiety. Unlike the strict hierarchy of Old Spain, New Spain was a place of shifting social mobility. The Casta paintings, most of which were exported to Spain, provided the curious a window into this new, exotic world, while the categories they named and illustrated promised a sense of containment and order.
We have entered a new period of mobility, of hybrid identities and fluid social classes, not unlike that unleashed when the two hemispheres were brought together at the end of the 15th century. We also live in an era of heightened anxieties and often resort to charged terms to categorize individuals: “migrant,” “illegal,” “refugee,” “patriot.” As if seen through a TSA scan, these individuals are simply human, but our preconceived categories place on them a presumed identity, like that of a wood-carved mask.

The “Casta Paintings” form part of a larger project, novelistic in scope, comprised, as Friedemann-Sánchez’s website explains, “of paintings, sculptures, objects and mixed media that together and in different voices weave a synchronicity of dialogues, passages, punctuations, silences about hybridity and cultural ownership.” One of these, a wall-size work from her Cornucopia series (which forms Chapter 4 of the project), occupies the gallery’s back wall. Like the Casta Paintings, it is executed on the very contemporary material of black Tyvek, on which the artist has collaged hundreds of hand-painted images of flora and fauna, each taken from historical sources, and painted in a style that reflects the artists of the Baroque in Latin America. The effect is that of an immense luxury item, inspired by the Columbian mopa mopa technique which was itself inspired by Asian lacquerware — a crossing of multiple cultures and time frames. The fecund promise of the bounties of the New World are undercut, however, by the presence of rifle-bearing soldiers sprinkled throughout the composition, a likely reference to the civil unrest in the Columbia of Friedemann-Sánchez’s youth.

To view these works at UMOCA is like attending a book reading where the author must choose a passage that can be appreciated as self-sufficient while promising the richer associations in the context of the whole work. The Casta Paintings and the work from Cornucopia reveal a fecund visual vocabulary that amplifies a rich voice exploring contemporary hybridity in a world of shifting identities. 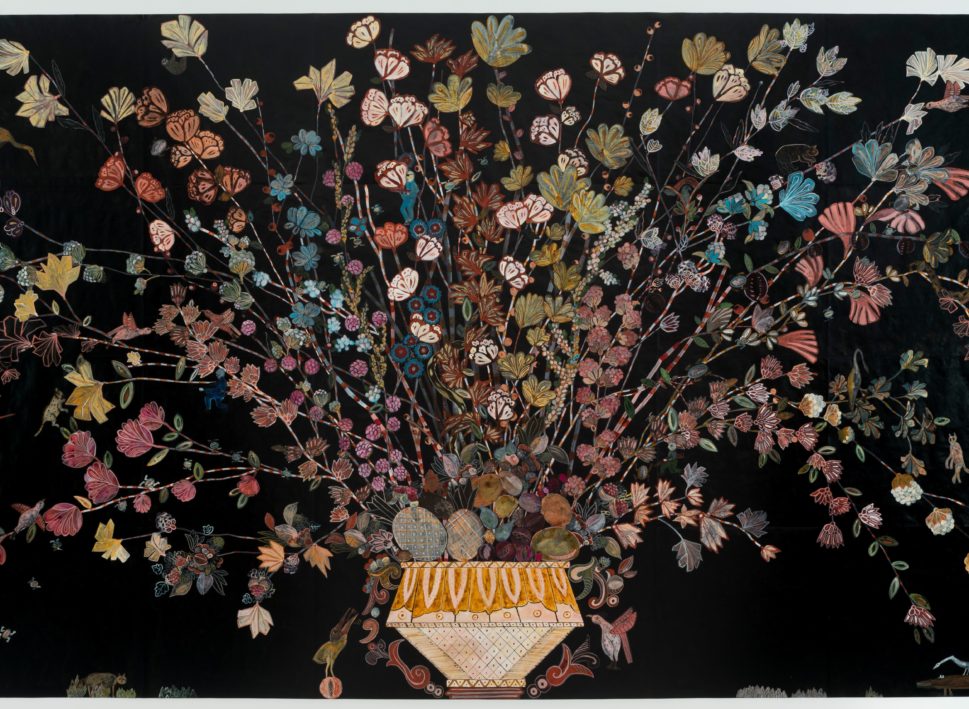 Nancy Friedemann-Sanchez, detail of work from the Cornucopia series.