One of the most magnificent works in the retrospective of visionary artist Benson Whittle now at The Museum of History and Art in Fairview is a wooden screen/pierced relief that treats a deep and ancient myth: Apollo’s thwarted pursuit of Daphne. Carved and coaxed out from a massive panel of black walnut, the piece captures the moment when the smitten god sees his fleeing love-object transformed into a laurel tree—from whose leaves will come the bays that form the poets’ only crown, and from whose branches will be fashioned the lyre for musicians’ lays and laments. It is a meditation through allegory on the sublimation of Eros, and is worthy of a place alongside the stunning sculpture in marble on the same theme by Gian Lorenzo Bernini. That Whittle might be regarded as a latter-day peer of the Baroque master will suggest the stature of this extraordinary maker—and instances why his exhibit is not to be missed.

Magnificent, yes—and also definitive; for in its interplay of formal bravura and symbolic suggestiveness it is perfectly representative of this artist’s comprehensive gifts. A penetrating interpreter of the past, a musician and a poet, he has here brought into satisfying synthesis his profoundest thought, his most moving rhythms, and his long-honed sense of telling beauty. 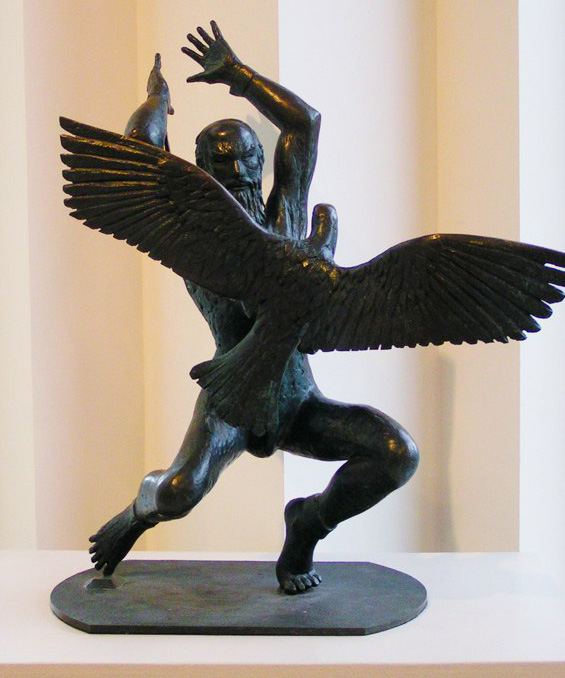 It is Whittle’s versatility, in fact, along with his mastery of tradition and sheer manual dexterity, that set him apart. That work such as this should have been made in our debased day—when threadbare “concepts” stand in for accomplished craft and the “less” of minimalist musings remains inalterably that—seems all-but unbelievable; so, too, does the fact that the screen at Fairview is surrounded by works wrestled into being from such a wide array of materials. Produced over the course of 50 years, there are drawings, paintings, and bronzes; sculptures in wood, alabaster and stone; woodcuts and an etching—and all have sprung from the same perfervid imagination and broad knowledge, the same unerring and even magical hand.

The artist has said he took his inspiration for the Apollo/Daphne screen from Ovid’s Metamorphoses, a never-exhausted source for artists and writers since its appearance 2,000 years ago. Here’s what the 16th-century English pastoral poet Andrew Marvell, in his brilliant poem “The Garden,” made of the same tale of baffled desire transmuted into fecund generation:

The Gods, that mortal Beauty chase,
Still in a tree did end their race.
Apollo hunted Daphne so,
Only that She might Laurel grow.

In his creations, Whittle—whose first passion was poetry, and who retains in a capacious memory entire, exalted passages of Keats and the other Romantics—gives weighty body to the ethereal eloquence of such predecessors.

Another subject drawn from Greek mythology appears in “Prometheus Unbound,” a medium-sized bronze which shows mankind’s fire-bringer enduring—but definitely not succumbing to—the punishment meted out by Zeus: battened on his liver, an eagle tears at his flesh with powerful claws, meanwhile staring him obscenely in the face. In his molding Whittle has made the immense, coiled energy of the tormented hero palpable, his steely defiance an exemplum; this is sculpture whose subject matter and execution work in tandem to inspire. 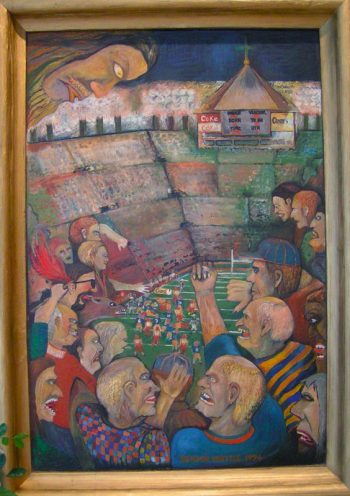 Not all of Whittle’s work references the classical world, nor is it all in a sublime key: he is also a trenchant satirist whose mockery of life’s perennial grotesques issues in sardonic comedy. “In the Marketplace,” a large, vertical painting in garish hues, presents, with a vividness scarcely bearable, the spectacle of a vendor dangling meretricious goods before a motley array of jackal-like, would-be purchasers, their avidity positively bestial; it is a nightmare vision of the inhuman transactional which grew out of the artist’s impoverishment in Madrid in the early 1980s. The figures in the crowd suggest the influence of painters as diverse as Picasso, Munch, and Hieronymus Bosch, but the conception is pure Whittle; one can hear the gallows laughter of the famished man he then was ring out from the oil on linen. And in “Enraged Football Crowd; or The Bad Call,” completed in 1993, the eponymous congregation gesticulates from the stands on high at the players and referees on the gridiron below; meanwhile, above the fan(atics) floats the head of a presiding, Christ-like deity. Anyone who has attended a game at BYU or Notre Dame, where religionists regard their team’s touchdowns as sanctions from the divine—or has fathomed the message of Bob Dylan’s “With God on Our Side”—will relish the satirical point. 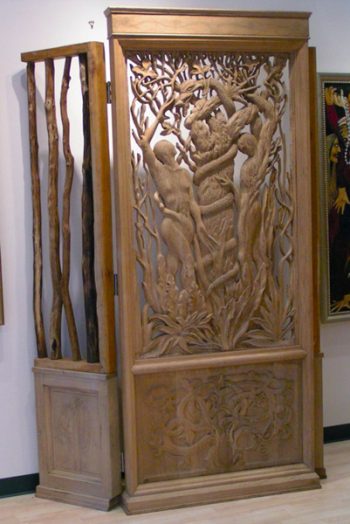 While “The Bad Call” manifests ridicule for the narrowly partisan and petty among those in possession of what William Dean Howells indelibly termed “a pocket Providence,” Whittle is also capable of expressing intense reverence for the Judeo-Christian weltanschauung. In “Large Oaken Screen: First Parents w/Serpent and Fruit,” another monumental wooden screen/pierced relief in three, hinged parts, Adam and Eve are linked to the trunk and branches of the tree of knowledge of good and evil, around which sensuously spirals the thick-bodied Tempter. Executed in an astonishing interweave or interlace motif which Whittle finds particularly congenial—and which is something of a signature device for him—the figures can be read as writhing in bondage or as types of organic connectedness; thus the screen as a whole evokes theological debates over the meaning of the Fall: was it a fortunate one, the so-called felix culpa, or must it be lamented? In its counterpoint of intricate delicacy with massive solidity, the work is as poignant as it is powerful, and is capable of moving believers and unbelievers alike.

In “Plumed Serpent” Whittle’s imaginative engagement with a system of belief—this time the fascinating and sanguinary pagan one articulated by the Aztecs or “Mexica” of pre-Conquest Mexico—has resulted in a sculpture that is less an objet d’art than a holy, votive one. Chiseled out of black limestone brought from the Spanish town of Calatorao, this small, dense piece refers at once to the mysterious god Quetzalcoatl and D. H. Lawrences’ 1926 novel The Plumed Serpent. Yet the sculpture transcends its mytho-poetic and literary sources to become something numinous; it is an uncanny, graven idol whose inhuman serenity and gravity of aspect compel an adoration not a little inflected with terror. 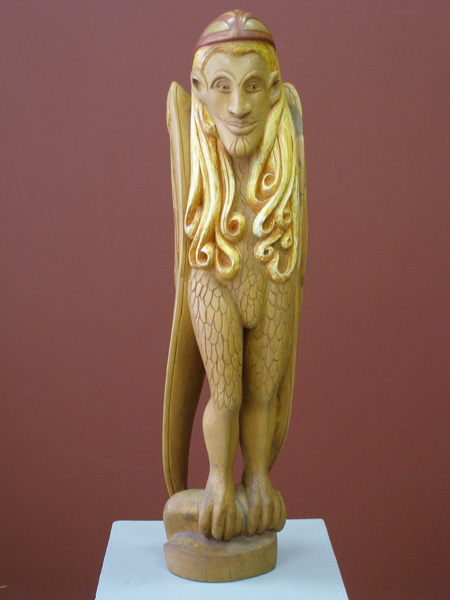 Viewers taking in these and other marvels in Fairview—the fabulous sculpture in gleaming alabaster of “Amphisbaena, or Medieval Imaginary Being,” for instance, or the sensuous woodblock print of a man and woman harvesting grapes—will go away bewildered by Whittle’s relative anonymity in the art-world. For museum director Ron Staker, who has known the artist for some twenty years and has long wanted to present an exhibit of this scope, it is patent he has yet to receive the kind of critical respect and attention from collectors he merits. “Unlike many artists working today,” he asserts, “Ben doesn’t create out of the present alone. His scholarly background, his reading, and his connection to the entire tradition of myth and philosophy and art-making make him entirely distinctive.” Staker thinks this has misled some faddish critics to dismiss Whittle’s work as derivative or naively out-of-date; incredibly, some do not take him seriously. Yet Staker insists the artist “is transmitting the discoveries and excellencies of the past in a way that is very original and exciting,” and follows this with an incontrovertible effusion: “To have such a range of his accomplishment on display is overwhelming.”

Now 63, and recovering from a brain tumor diagnosed two years ago and the subsequent surgery required to remove it, Benson Whittle was born in Brawley, California and divides his time between homes in New Mexico and Utah with Patty Hatch and their 8-year old daughter Zöe. Ben was just Zöe’s age, in fact, when he made the earliest work of art in this show, an irresistible depiction in color crayon of a “Fat Black Bird.” Its freshness, charm and cartoonish scale elicit the most uncomplicated of responses to be felt in this space rendered glorious by a lifetime’s work: a smile of pure delight and wonderment that genius might be manifest so purely and so early on—in the keenly seeing child who was father to this remarkably gifted man.

Benson Whittle’s retrospective at the Museum of History and Art in Fairview will remain on display until October 13th. Admission is free; for more information, call (435) 427-9216.