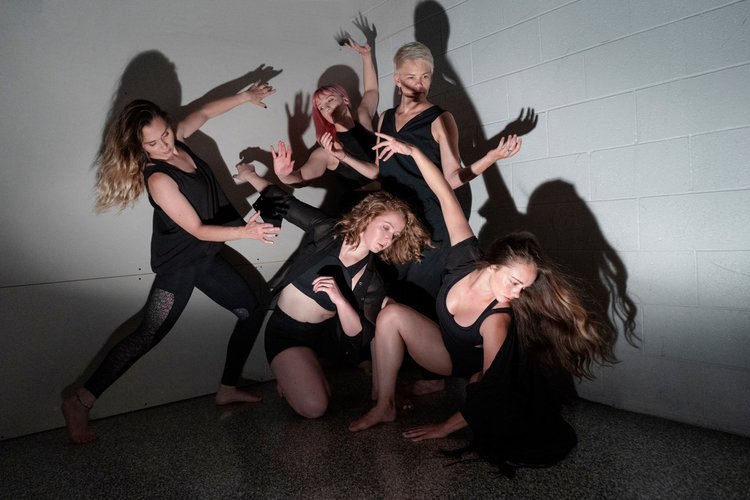 Penumbra, presented by Myriad Dance, offered a series of short pieces inspired by the relationship of movement to lighting.

Picture, if you will, the moon during an eclipse. Those who have been lucky enough to experience even a partial eclipse, such as that seen in Salt Lake City in 2017, may quickly locate an image. Now, mentally zoom in on the space between the illuminated moon and the area in shadow — this is the moon’s penumbra.

What’s interesting about a penumbra is that it is not a stagnant area. Rather, the word itself implies a changing, merging border — a place of movement. This term framed Myriad’s show as an exploration of light and shadow, and “their creation, contrast, co-dependence, and convergence,” as explained by artistic director Kendall Fischer in her opening remarks.

The performance took place in a space at the Gateway, where a draping white expanse became the backdrop for the overlapping shadows of dancers. Purple, white, and blue incandescent light bulbs hung from long cables, decorating the space with splashes of color. Symmer Andrews and Leslie Babalis entered the space and turned on two sets of lights pointed on a diagonal. The appearance of light was a choreographed component, intentionally initiated through the dancers’ actions. For a moment, they relished in the light, moving gently as if to absorb the warmth of the beams on their limbs.

This brought to mind the work of renowned lighting designer Jennifer Tipton, who often considers the way a lighting cue feels to the performers as she designs. She has noted that the sensation a light cue evokes for the dancers ultimately shapes the performance. Tipton, who has designed for Paul Taylor, Jerome Robbins, and Twyla Tharp, among other greats, has spent her career researching the relationship of light and performance. In a 1995 New York Times article, she remarked, “I feel that light is like music. In some abstract, emotional, non-cerebral, non-literary way, it makes us feel, it makes us see, it makes us think, all without knowing exactly how and why.”

In many ways, Penumbra encapsulated this very comment. Myriad used the impetus of light to shape movement, and the way the dancers embraced a combination of detailed articulation, emotive tension, and swirling patterns of momentum created an ode to light’s mysteriousness. However, in a show built around light, Penumbra lacked a significant component: a lighting designer. With only two simple shifts in lighting, I was left craving more of the foundation of the performance. Today, even shows taking place outside traditional proscenium theaters and their ample light plots may house installations and other lighting technology — all great opportunities for collaborative processes.

Nine individual pieces made up Penumbra, with choreography by Kendall Fischer, LayCee Barnett, Ashley Creek, Charity Wilcox, Amelia Martinez, Temria Airmet, Emily Haygeman, and Fiona Nelson. The show provided an excellent framework for connecting multiple pieces by distinct artists in a cohesive experience. Throughout, dancers wore an array of buoyant jumpsuits in tones of white, brown, pink, and blue. Each piece also overlapped with the next, transitions seamed tightly together to create an overall sense of unity.

Ashley Creek’s “Paene (Almost)” featured a circularity that emerged in the spatial patterns and pathways of the dancers’ torsos and limbs. Tawna Halbert, Alyx Pitkin, and Jana Young glided into and out of the floor, dragging their toes against the concrete surface and articulating through their upper backs. The piece featured a refreshing number of jumps and spurts of energy that progressed to a point of climax.

“Shadow Self,” choreographed by Emily Haygeman, referenced, from psychology, the unconscious component of human personality. “Everyone carries a shadow,” wrote Carl Jung, founder of analytical psychology, “and the less it is embodied in the individual’s conscious life, the blacker and denser it is.” This idea served as a framework for the movement in “Shadow Self.” A tension coalesced between the four dancers. Hands concealed faces, eyes observed intently, limbs pulled and shifted. Through touch and through weight-sharing, the dancers manipulated each other’s bodies, provoking push-and-pull responses. The end of the piece brought about a resolution: the dancers stood in a tight clump and gently mirrored each other’s movements.