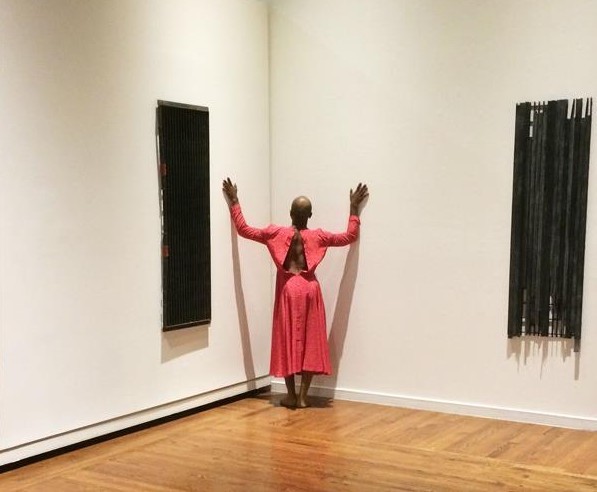 Attending two performances addressing themes of gender, sexuality, race, and power in Salt Lake City over the same weekend in November was disorienting. UMOCA’s When Flesh Becomes Matter: Bodies Unbounded, by choreographer Yasin (Ya-Ya) Fairley, and the University of Utah School of Dance’s Gender/Power, by Maya Ciarrocchi and Kris Grey alongside U of U students, were both curated to support LGBTQ youth. These programs and the people they support – including queer-femmes like myself – are facing disenfranchisement and overt attack by Donald Trump’s imminent presidency, notably emboldening members of the alt-right. Yet, these programs and these people are persevering, bearing the light of hope in a time of blind fear and apprehension.

The weekend was made more poignant by what was happening 2,000 miles away in New York. While writing this double review, I heard Brandon Victor Dixon, the actor who currently plays Vice President Aaron Burr in the billion-dollar Broadway hit Hamilton, address Vice President-Elect Mike Pence, who was in attendance at the show:

“We, sir — we — are the diverse America who are alarmed and anxious that your new administration will not protect us, our planet, our children, our parents, or defend us and uphold our inalienable rights. We truly hope that this show has inspired you to uphold our American values and to work on behalf of all of us.”

Dixon said those words within a few hours of the performance of When Flesh Becomes Matter: Bodies Unbounded by choreographer Yasin (Ya-Ya) Fairley, along with Sobrina Serassio and Shaniece Brazwell. They were spoken the day before Maya Ciarrocchi’s and Kris Grey’s Gender/Power. Whether in New York or Salt Lake City, artists are responding.
Pause. Back up.

The essence of these performances began within pre-existing social issues felt by marginalized people before the election. It began with the layering of identity based on systems of oppression, domination, and discrimination that scholar and civil rights activist Kimberlé Williams Crenshaw calls intersectionality.

In anticipation of experiencing When Flesh Becomes Matter: Bodies Unbounded I found myself yearning for the catharsis I often feel when I see dance, but some of which, in this case, I did not feel I deserve—considering that I am white and this piece was performed by three able-bodied people of color responding “to ideas of exclusion, space, performativity and objecthood within the gallery artworks” in a deeply personal way.

There was a momentous stirring of flesh amid flesh; the third performance of the night had begun and all three performers’ eyes were on us — the viewers. They were unflinchingly occupying the space filled not only with people, but also with highly conceptual sculpture work using “three-dimensionality as a language to reframe and expand notions of objecthood.”

A series of images were presented by the performers: what began as an American flag became a gag, then a noose, then cast on the ground. There was a queerness to the fluidity of these images and the way that the performers moved; nothing was as it seemed, and there were multiple symbolic possibilities. Fairley flew through these images while walking swiftly around the room in tight black shorts and no shirt, weaving through a crowd of fully clothed, mostly white people who moved out of the way as if they were oil and Fairley water. Serassio and Brazwell flowed, also like water in oil, toward a corner of the gallery wearing black tank tops with ankle length sheer black skirts, cut on the sides allowing them to move freely.

Sirens rang through a previously unassuming sound-texture. The sound of breathing devolved into hyperventilation as the voice of a police officer issued orders. Fairley moved freely in one place, eyes downcast, gesturing toward herself/themselves, but also on display. This strong fluid movement quieted as breathing quickened. Gunshots sounded. Fairley convulsed, and we could hear their breath matching that of the recording. Their convulsions were so fully physicalized that I could see bullets hitting them, I could feel how it feels to cry and shake and I knew with remorse that that action could also indicate laughter, but it didn’t. This is not a laughing matter.

Bodies convey so much about individual experience as they are the vessel thereof. Physical positioning can indicate what you’re comfortable doing by how easily you move, who you relate to by how close you stand to others, how well you’re feeling by how much energy is required of standing upright or lying down. Physical positioning can indicate one’s social, emotional, economic, or cultural position; this is positionality.

After convulsing, Fairley fell at the feet of a white woman in the audience. Everyone stood and watched. Serassio leaned into a corner of the room and Brazwell surrounded her until they were both grappling with various restrictions of the structure surrounding them. All three performers held hands around a metal tower filled with hard-to-see drawings by artist Tove Storch, and yelled “I celebrate myself.” Serassio and Brazwell frequently flanked Fairley, the focus of the piece.
Physically derived meaning abounded from these repeated movements, creating ritual, but nuance sometimes was derailed by the sound score. It dripped with melancholy music; there were recordings of powerful words spoken by Solange, Toni Morrison, Audre Lorde, and even Martin Luther King Jr., whose iconic voice was interestingly juxtaposed with the image of Fairley striding through the room holding up a white dress like a cape. The dress was painted with Sojourner Truth’s words, “ain’t I a woman?” This last juxtaposition of sound and performance revealed conflict implicit in a queer black dancing body, buoyed by MLK’s civil rights work, but also challenged by his patriarchal lens. Today, the Black Lives Matter movement is more inclusive: black [LGBTQIA] lives matter, layers abound.

Positionality was also foundational to the composition of Gender/Power, a piece created under the direction of Maya Ciarrocchi and Kris Grey from New York after an intensive workshop series with the performers. The piece was performed in a large dance studio in the Marriott Center for Dance on the University of Utah campus. Performers told stories of exclusion from various points in the studio, various lenses of identity, garnered by one another, or alone, among the audience that was scattered on boat-like platforms, holding witness. The first story was told in a measured whisper to another performer. Each line was repeated by yet another performer into a microphone, implying that all following stories were normally told in whispers or kept inside; they were occupying space/sound waves not normally given to them. The piece ended with all of the performers moving in unison to a pulsing beat, their voices still ringing in the air. Their stories were unique and not to be appropriated as stories representing anyone else, but everyone was moved by them, literally and figuratively. The stage lights were magnified on cheeks sparkling with tears of empathy, sympathy, sorrow, and vulnerability from the performers and witnesses.
A vital aspect of both works was an invitation for participants (audience members) to process the performance collectively, to take part in a conversation that mirrored the creation of the works, and to continue the performance beyond the stage space. I was able to stay for Fairley’s processing period. We held hands in a circle in an act of radical celebration of ourselves. We were guided to breathe together and walk toward the center of the circle; I felt the warmth of many people around me. Fairley walked around us, their voice shifting from point to point, calmly guiding us to move to the identity category, positioned with words around us, that best fit your answer to the prompts: 1) I feel the most secure in this aspect of my identity.

Move to the location of either race, gender, ability, class, or sexuality. Acknowledge those who also feel that way. Move together again.

After completing this exercise-turned-catharsis, we were invited to have a more conventional Q & A. One woman bravely stated that she wanted all of the white people to leave the room while she experienced deep empathy with the painful performance. A white person defiantly responded that they wanted to help people of color and to witness their stories in order to empathize, while ironically interrupting those who they wanted to help. The room was ablaze with identity politics. Tears were shed. People were heard, ignored, and felt. The matter of movement began to matter, to evolve, to be exposed.