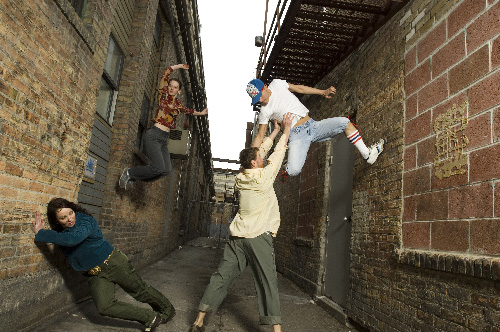 As they embark on their eleventh year as a collective improvisation company, Movement Forum should be well known to most in the Salt Lake dance audience. However, their unconventional, and frequently public, performances may also mean their patron base has extended beyond the expected dance crowd into more ambiguous territory.

Since 2003, Movement Forum (sometimes called MoFo) has been dancing in the 9th and 9th crosswalks, at museum exhibition openings, as part of lecture series, and even in the beating sun at Liberty Park. They have also seen the occasional proscenium setting like the University of Utah’s Performing Dance Company, the Rose Wagner, and, recently, the Utah Arts Festival. Founded by Graham Brown and a group of fellow graduates and students from the University of Utah, the company carved out new territory inspired by their belief that artists could collaboratively practice improvisation as performance. Now headed by Danell Hathaway and Erin Kaser Romero, alongside their numerous company collaborators, Movement Forum continues to believe that practicing improvisation in unique environments has great value as a performance model.

Movement Forum’s performances still embody the physicality that Utah audiences have come to expect from dance, as many of MoFo’s artists use contact, or partnering, as an element of their collaborative performances; but co-directors Danell Hathway & Erin Kaser Romero are starting the new year asking questions about what varieties of improvisation the current company model may have overlooked. Part of their reflection has included a consideration of alternatives to push into the next decade of making dance.

The company has formerly worked in large collaborative ways where all members are viewed as co-creators and participants in a given piece. At some point the group also saw company members take on leadership roles as desired, but any structures or concepts still came primarily from within the group. As the years passed and the company members changed, the initial commitment to the true collaborative experience waxed and waned. Given this information, Danell and Erin embarked on 2014 with an idea for change: an invitation for local and national artists to create a new piece for the company. After successful pitches for funding from Kickstarter and other granting agencies, the company official invited Gabriel Forestieri, Miguel Gutierrez, Ishmael Houston-Jones, Steve Koester, and Yvonne Meier to participate.

Romero notes that “we conceived of this project for the company because working with the same model for 10 years we figured, hey, there must be new ways to approach this,” while Hathaway adds that “seeking outside ideas helps open MoFo to see how national artists are collaborating. We hope it helps us find a new direction and pushes us through the ebb and flow of working together this long.”

The artists they’ve invited represent both local and national practitioners of improvisational movement forms. University of Utah Department Chair Steve Koester was the first selection, having been a mentor to many company members as he introduced them to improvisational strategies throughout their undergraduate study.

Others guests are linked to the company in diverse ways. Ishmael Houston-Jones, Yvonne Meier and Miguel Gutierrez have initial ties to the group through Michael Watkiss, a company member who studied with all three at the American Dance Festival. Watkiss developed close ties with Houston-Jones in particular as he toured his revival of “THEM” across Europe in the past several years. Houston-Jones and Gutierrez are both part of Salt Lake’s dance scene in other ways — serving on the board for a local non-profit and attending SaltDanceFest as a visiting artist respectively. Gabriel Forestieri, another artist included as a guest, was connected through a different company member, Leah Nelson Del Porto, who had worked with him previously in New York.

Although all included artists have worked with the form of improvisation, each brings something different to the table. Given his tradition of performing as a method for connecting communities with their environments, Forestieri is considering working outdoors. As the only locally commissioned artist, Koester will presumably work most intimately with the group through the course of the year. And Miguel Gutierrez plans to do a virtual collaboration.

Yvonne Meier, a New York based artist from Switzerland, is known for a lot of things but definitely for the scores she creates for improvisers. Scores are a kind of map or series of directives that shape an improvisational performance — Meier’s in particular are wildly uncanny and definitely a challenge. Other challenges Movement Forum faces may include the way several of these artists work with layers of verbal and physical improvisation alongside other new methods or styles.

Romero adds that the pool of invited guests is primarily national because “living and working in Salt Lake City, national artists don’t know us and reaching out is a way for us to connect and expand our own network. These residencies are also for us as company members to become more aware of what is out there in the larger world.”

The residencies for each artist will extend throughout 2014 with periodic informal showings and a culminating performance in-the-round at the Rose Wagner Studio Theater. Audiences who’ve seen Movement Forum before can expect their own ideas to be changed, both about what the company is capable of and what improvisation can look like. Audiences who haven’t, can expect to see a wide exploration of movement styles and probably find something unlike what they’ve previously seen in the theater.

As each artist comes to town, Movement Forum also hopes to include them in the tradition of monthly improvisation jams at their rehearsal home base at Rowland Hall as well as other community dance venues. The jams are free to attend and a unique way for artists outside the company to work with guests they may not otherwise experience.