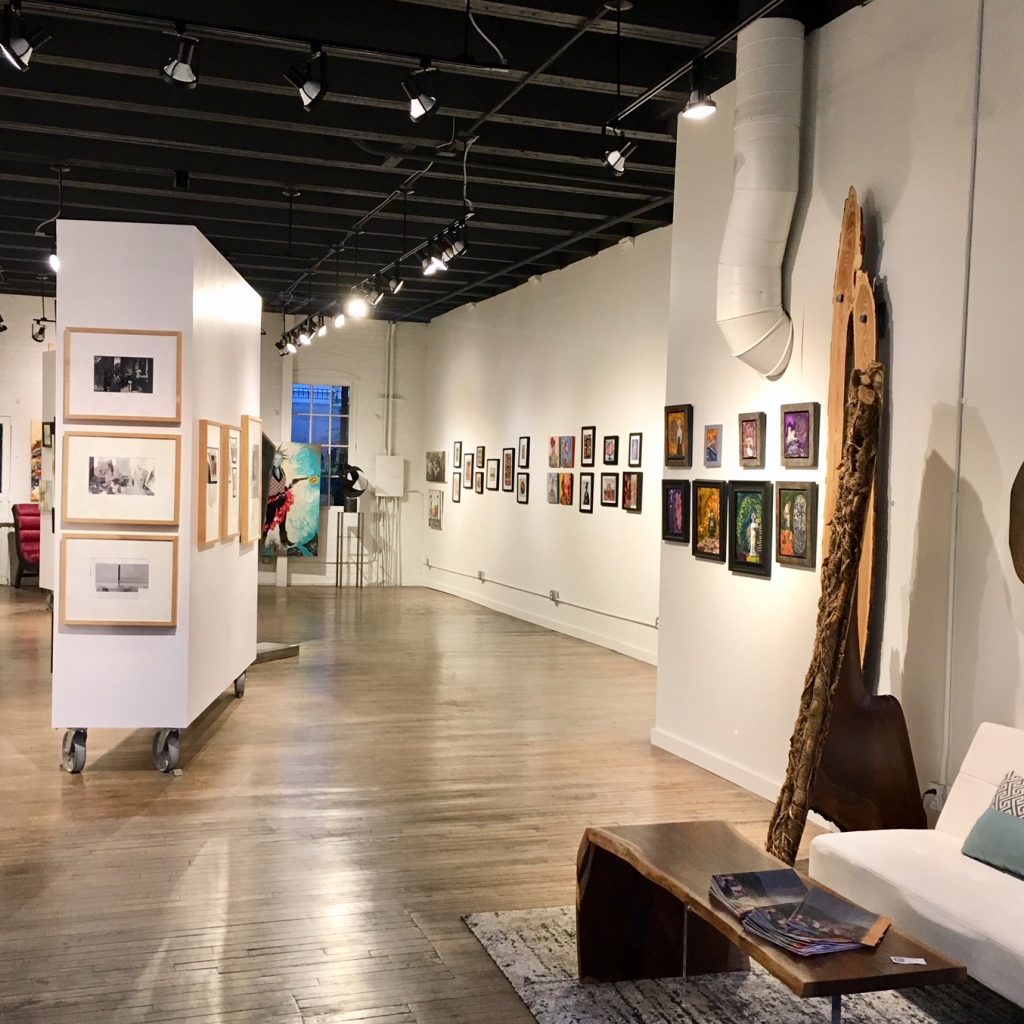 [dropcap]For [/dropcap]many of us, “collage” has consisted of either a papier mâché project gone awry or the deposit of clumsily scrunched tissue paper on cardstock our kid brought home from kindergarten that we don’t have the heart to remove from the fridge. With its material mélange, the medium has struggled to be considered “high art.” This is perhaps what makes Fringe Gallery’s new show so intriguing: it consists entirely of collage. Curated by David Lecheminant, Rocking Paper & Scissors features the works of six Utah artists who have taken the technique far beyond paper pasting. Whether it be exploring the humorous, confronting the political or playing with perception, these collages have something to say. 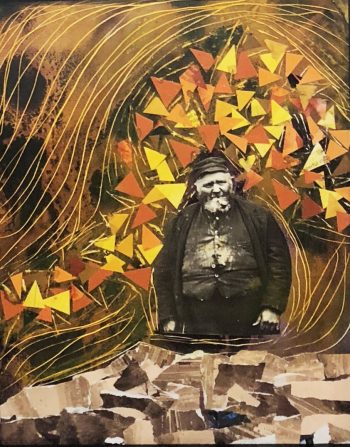 “Not Sure How I Wound Up Here” by Emily Larsen

Central to the concept of contemporary collage is the idea of the “found object.” Recycled images take on new meaning in the works of Emily Larsen and Sarah Milne. Through her use of both old and new materials, Larsen is able to achieve precisely what she expresses in her artist statement: “to create introspective and humorous mixed media collages that aim to capture and comment on the universal experience.” Her “Not Sure How I Wound Up Here” is a funny but poignant example. A black and white photo of an old man from days past shoots the viewer a comically disgruntled look. A lighter interpretation suggests that he is puzzled at how he arrived in a frame backed by a colorful patched background. However, upon closer look, the tattered clothes and weary expression are indicative of underlying feelings of shame and confusion. Larsen’s work engenders sympathy for others in a profound—even if simple—way, creating a bond between the viewer and people of all periods and places.

Sarah Milne similarly stresses the importance of the found image in her works but takes it beyond two-dimensional pasting. Her works included book bindings and covers which give her works dramatic layers and provoke thoughts about the materials’ past-life. According to Milne, she is fascinated by “how the worn color and textures of old book parts, ephemera and other subtle signs of life, respond to each other.” It is as if she feels a sacred obligation to preserve and mummify things in their state of decay. Because of her inclusion of three-dimensionality, her works protrude into the viewer’s sphere, inviting them to engage in conversation with artifacts of the past. 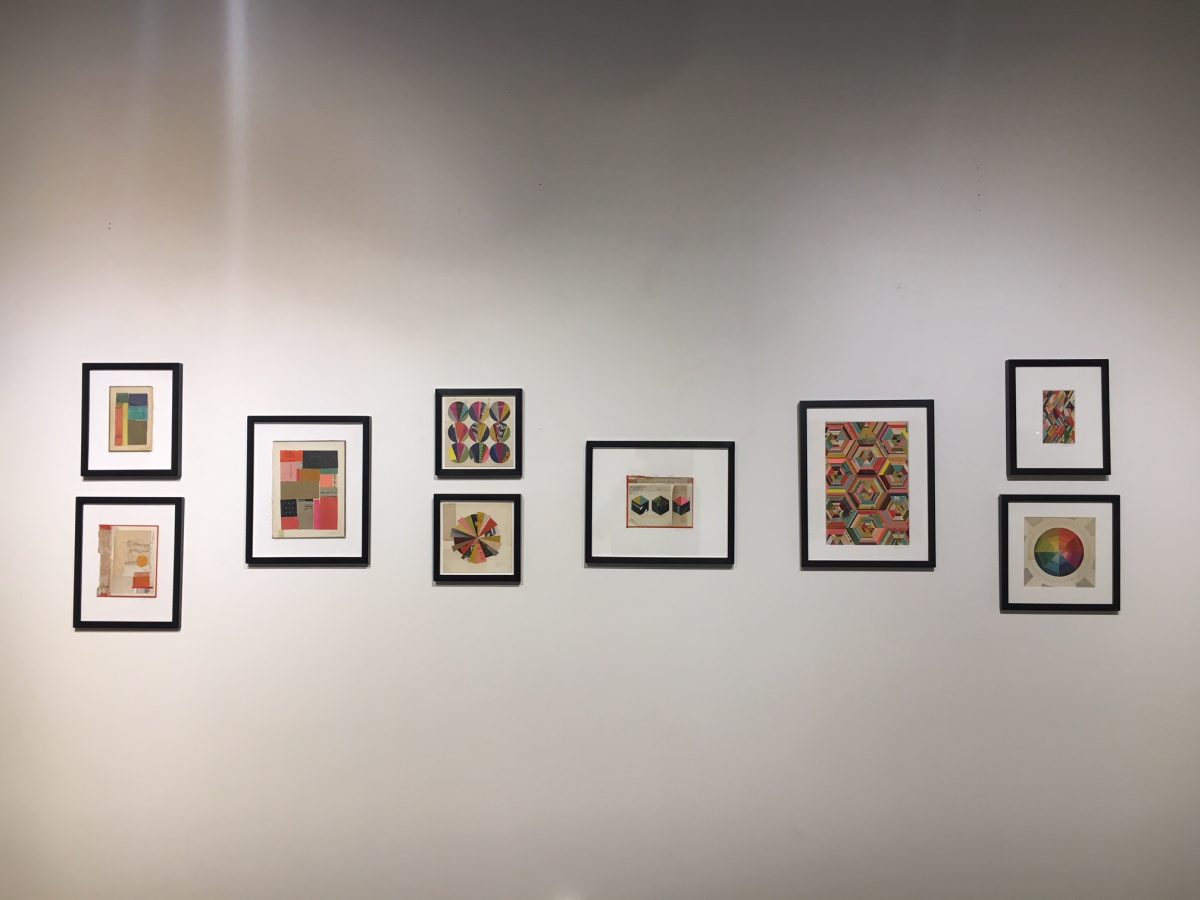 Liza Julien and Rebecca Pletsch seem primarily concerned with actually blurring the lines between collage and other mediums instead of accentuating them. At first glance, Julien’s landscapes seem to simply be a cut-out picture superimposed against a contrasting paper quilted background. However, the longer one looks the more intricate the work becomes, revealing complex layers and interwoven parts. Her “Unexpected Beauty After Storm” can be discovered just so. At first, the viewer assumes that the stream that travels gently through the scene is part of the original image. However, upon closer observation, it becomes clear that Julien has cut out the shape of the original water feature and replaced it with a subtly patterned blue paper. This detail is imperceptible at first, but after staring at it for several moments the simple landscape becomes a fascinating game of “spot-the-difference.” 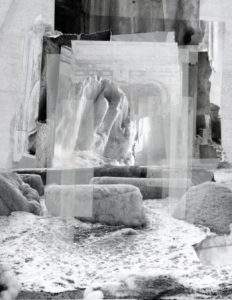 Rebeccah Pletsch is also interested in playing with perception through the medium of collage, although her primary purpose is to replicate an atmosphere of memory. Her works are significantly less colorful than Julien’s but it seems an appropriate choice given her use of symbolic devices. “Light and darkness, clarity and obscurity, presence and absence, propose to the viewer their own recollections stimulating their own associations,” prompts Pletsch. The effect of her work is much more subtle; it is difficult initially to identify what objects are represented, but this provides interesting insight to and provokes questions about the process of memory and how we assign meaning to an image based on individual experiences.

Of the six artists featured, Kandace Steadman and Kathy Simpson are the edgiest of the group in terms of subject matter. In “Limb Woman,” one of Steadman’s most striking works (one of a four-part series that engage with the physical and cultural expectations of women), the subject looks out at us with a vacant expression and is entirely decorated with the borrowed limbs of who knows how many magazines. While aesthetically interesting and creative, more importantly, Steadman is perhaps speaking to the danger of fixating on parts rather than the whole and how our perception of reality is often just a composite of pieces. “Vintage Woman,” “Urban Woman,” “Beehive Woman” and “Limb Woman” each play with one component of the “ideal.” In theory, taking all of the parts society has deemed “necessary” and combining them into one image should yield perfection. However, Steadman’s work suggests that the excessive combination of ideal elements will only ever result in something completely unnatural, even disturbing. 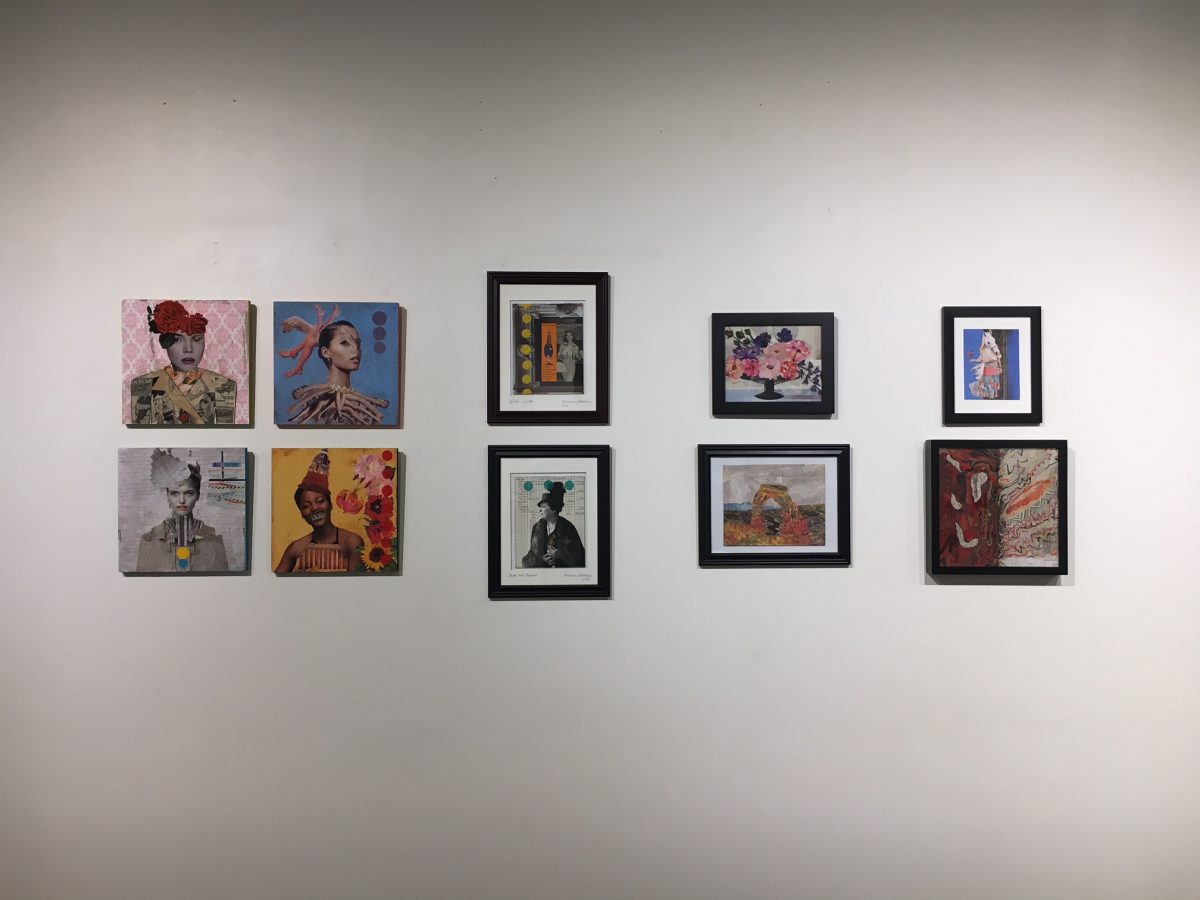 While Steadman pushes back on traditional gender expectations, Kathy Simpson takes on environmental and global issues. She uses a vibrant palette to create a visually engaging viewer experience. “Ocean Pollution Solution” is an excellent example of her aesthetic style, but more importantly demonstrates how her use of mixed media makes waves. Like a vanitas painting, what at first looks to be a cool surfer riding a psychedelic wave, a closer look reveals that he is surfing in polluted water: discarded objects labeled with recognizable brands float and swirl in a viscous sea. Activist art has taken many forms in the past, but it is hard to imagine a more effective medium than collage. Because of its reliance on visual culture and commercial advertising material, it is equipped to articulate the consequences of living in a consumerist society because it uses its own language. It’s as if Simpson is saying, “Hey, you said it, not me!”

Whether it be playful, illusive, or provocative, there is something new to see in the works of these six emerging Utah artists exploring the possibilities of collage and helping us reconsider the “fine” in fine art: that it resides not in the quality of the material, but what it is made to do and say.