The Halloween season is fully upon us, with haunted houses, corn field mazes, trunk or treats, costume parties and halloween-themed exhibits in full swing. 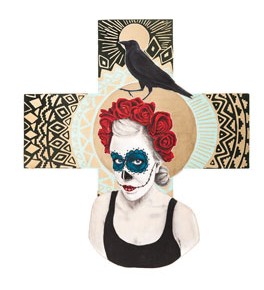 The best monster-themed exhibit is probably down at Blonde Grizzly, where their stable of designers and artists have given free reign to the more disturbing corners of their imagination; while Hilary Wilkinson’s exhibit up now at Charley Hafen Gallery, with its influence of Mexican folk art and animal symbolism, will get you in the mood for the Day of the Dead.

Una Mano Amiga and The Utah Cultural Celebration Center present the 9th annual Day of the Dead altar display and community gathering, a folk art exhibit and event recognizing the Mexican holiday. During the traditional two-day holiday. celebrated November 1-2,  families and friends gather together with other community members to pay respects to and remember the dead. Altars are constructed at gravesites or in homes with food, beverages and other items once owned or appreciated by the deceased.  It is believed that for these two nights – one for children; the other for adults – the spirits of the dead return to be with family and friends. The more elaborate the altar, the more likely the dead will return to be with loved ones once again. The rituals and altar construction date back to the ancient Aztecs, ancestors to Mexicans.The free celebration features a variety of exciting, educational, and hands-on activities for the whole family. The altar display is up October 29 – November 6 (Mon – Thurs, 9 a.m. – 6 p.m. and by arrangement), with a Day of the Dead Celebration November 2, 6-9 pm.

Meanwhile, tomorrow night (Satruday) at 7 pm, the folks at Dunce School for the Arts in Sugarhouse will be exploring monsters through the ages. They will be exploring how many of the monsters we are familiar with today have their roots in foreign cultures and ancient traditions, ranging from egyptian and greek deities, to medieval devils and inuit spirits. You’ll have the chance to learn what distinguishes them from their cohorts, and how Darwinism introduced a whole new breed of modern monsters to aggravate our nightmares. 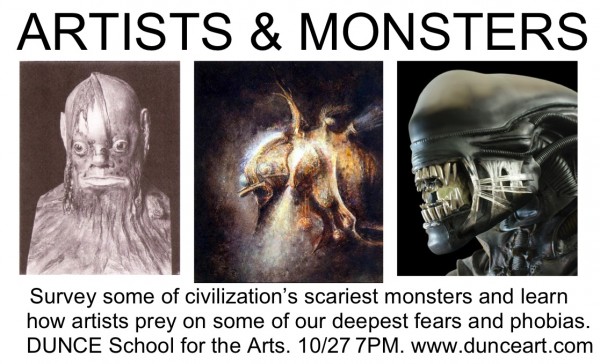