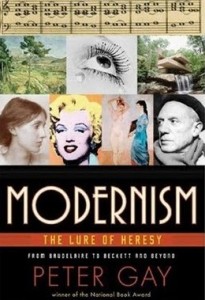 In the opening line to his new book Modernism: The Lure of Heresy

, National Book Award-winning author Peter Gay writes, “Modernism is far easier to exemplify than to define.” In the following five hundred plus pages (as well as a weighty section of notes and bibliographical essays) Gay attempts to define Modernism as well as exemplify it. Rather than “define,” it might be more accurate to say that Gay “classifies” Modernism or the Modernist as a species, characterized by two traits proposed by Gay. In this ground-breaking work that attempts to come to terms with all the facets of the fecund artistic period we call Modernism – painting, sculpture, prose, poetry, dance, music, film, architecture — Gay chooses examples from each field and places them under his historical microscope. Though Gay’s system of classification can be helpful in considering disparate artistic temperaments and endeavors under the same broad umbrella, ultimately the complexity of the era subverts the structure Gay tries to place upon it.

Gay, a Jewish-American who immigrated to the United States from Germany in 1941, is an historian of social ideas. He dates Modernism from the time of Baudelaire in the mid-nineteenth century, to the advent of Pop art in the 1960s. Because, the author says, any attempt to define Modernism along political, stylistic or ideological lines ultimately fails, he proposes his own identifying classification, based on two main characteristics: “First, the lure of heresy that impelled [artists’] actions as they confronted conventional sensibilities; and, second, a commitment to a principled self-scrutiny.”

The majority of Gay’s book is given over to case studies, what Gay calls “classics,” in the various fields. Gay’s interest in the visual arts is broad. He discusses van Gogh, Gauguin, Cezanne, Ensor, Munch; Germans like Kirchner and Beckman; abstract artists like Kandinsky and Mondrian, and Surrealists like Dali and Duchamp; and of course, Picasso. In prose, Gay is more selective: Henry James, James Joyce, Virginia Woolf and Marcel Proust are his classic cases (with a separate essay on Kafka). In poetry Gay is even more selective, concentrating on the American-Anglo T.S. Eliot. Schoenberg, Stravinsky and Balanchine appear in the section on dance and music. In Architecture and Design, attention is given to Frank Lloyd Wright, van der Rohe, Le Corbusier and Walter Gropius. In Drama, Strindberg and Shaw. In film, Gay concentrates on D.W. Griffin, and Orson Welles (the perfect example of an outsider artist who bucked the system his whole career) as well as Chaplin and Eisenstein.

Though erudite in execution and impressive in scope and detail, Gay’s attempt at wrapping up Modernism in a digestible package becomes hampered by its own terms of classification. Too many artists, both mentioned and omitted, do not conform to Gay’s definition of the heretical or the subjective. Gay is not unaware of this problem. To come to terms with the eccentricity of Eliot, he terms him an “anti-modern modernist.” He notes the problematic case of Charles Ives, whose modernist innovations despite his middle class (and homophobic) life, place him outside Gay’s category of anit-bourgeois heretic. That being said, for the student of Modernism, this book can hardly be ignored. His readings of the works and histories of artists in a variety of fields, from the well known, like Joyce, to the more obscure, like the Norwegian writer (and Nazi sympathizer) Knut Hamsun, can be both daring and insightful.

In the role of historian, Gay also tries to neatly wrap up the era of Modernism, pointing to the advent of Pop art as the herald of its demise. Though his argument is on strong ground in terms of visual art, in other disciplines it is less convincing. As if cognizant of this difficulty, he shrinks from discussing the other fields. He does mention Gabriel Garcia Marquez as a continuation of the Modern in literature (though he could have mentioned many other as well). While Pop Art receives pages of attention, and Marquez paragraphs, Film and Architecture receive a line each. Dance, poetry and music are only alluded to.

Gay’s coda about Frank Gehry – a lingering modernist in architecture, according to Gay — seems odd, but might be of local interest considering the Gehry project proposed for Utah County. If Gehry is a modernist and Utah County can embrace his building then there can be little heresy left in Modernism.

Modernism: The Lure of Heresy by Peter Gay

Support Artists of Utah by buying the book at amazon.com

Tagged as: by Tony Watson