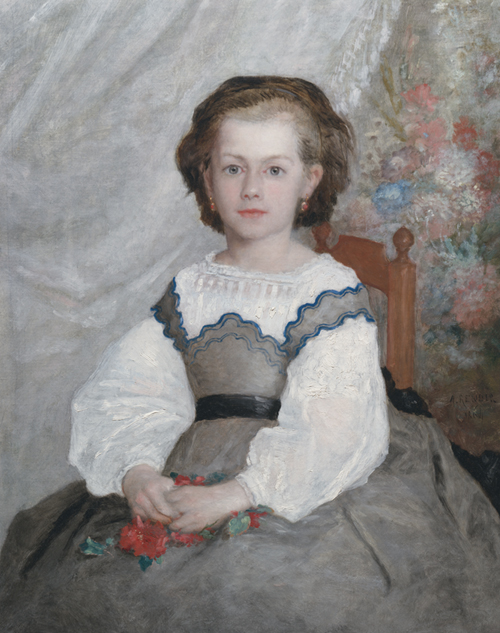 The UMFA is currently hosting its most impressive exhibit yet, The Cleveland Museum of Art’s Monet to Picassocollection. These renowned masterworks from the collection of America’s finest small museum have been displayed worldwide in Beijing, Seoul and Tokyo but Salt Lake City is the only stop in the Western US. Among the works are paintings, drawings and sculpture spanning 100 years of prominent periods in the history of Fine Art. From the Impressionists to Surrealism, visitors will be moved by the works of Monet, Renoir, Degas, Cezanne, Van Gogh, Picasso, Modigliani and Dali to name just a few.

As celebrated collections go, this installment might be by far the best both in the diversity of individual styles shown, and also in its intelligently-linked and cross-referenced nature, tying works to their prior and future art epochs. The sobering questions are, where do we find these vestiges and visual catalysts that evolve specific periods of art? Why are certain techniques and ideologies held over into the later schools of art? We can actually see the process of development in this exhibit. 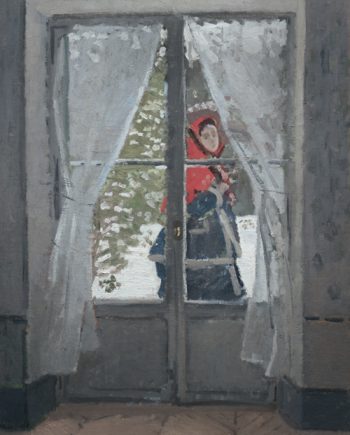 As with most turning points, the new techniques and ideas of the Impressionists, including Monet of the exhibition’s title, weren’t readily accepted into the mainstream. The claim that seeing light in a new, different way and the mundane as subject, got the Impressionists labeled as radicals by the stodgy Academie des Beaux Arts. Time and time again, these artists would submit their works, only to be rejected by those who still held that religious and historic subjects, and a tepid, undaring realism, were the only standards for fine art.

For example, “Romaine Lacaux” by Renoir (1864) shows the vestiges of the classical pose and hints of realism, but he uses bold solid color brushstrokes as a tool to see the change in light. This light surrounds us by being lifted from the subject’s blouse and the drape behind her, seemingly bouncing around the entire canvas. The artist’s brush lifts this white light, cautiously, carefully dropping it down on her dress and the flowers in the background. Renoir brings this portrait into Impressionism by using this technique of expressing light in color rather than using the glossy overcoat of sheen to the entire painting, as was the custom.

This technique is also evident in “The Red Kerchief: Portrait of Mme. Monet” by Claude Monet (1868-78). It’s as if the light is reflected not only in the white brush strokes but is evidenced in the reflection of shadow in the darker foreground strokes. The technique of implementing both light and atmosphere is generously combined in one single element, which draws the viewer’s eye to the subject. This element is translucency. The drapes are translucent, showing the yellow roof of a farm in the distance, causing the atmospheric effect ideal and necessary to the Impressionists. This translucency moves this from the indoor portrait to the idea of the exterior world as use in subject. “The Red Kerchief…” is most certainly a bridge between the earlier works of the Impressionist period and the later, more easily recognized pieces of the movement. Though both portraits are strikingly different, both break the rules of academic painting and are executed with a determined focus on light, brushstroke, everyday life and atmosphere inherent of the ideals of Impressionism.

The Post-Impressionists rejected Impressionism’s emphasis on naturalism and instead emphasized the use of color and pattern in concert with light. This often younger group of artists concerned themselves with pictorial structure far more than their predecessors. They introduced a new dynamic way of seeing by form, line and color elaborated upon from the Impressionists’ perhaps more placid, static forms. 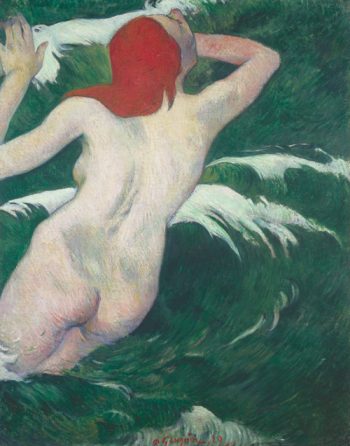 “In the Waves” by Paul Gauguin combines techniques of the Impressionist period and employs elements of nature, but is altogether different from the style of his predecessors.| Instead of singularly using the movement of light as form, he uses the form of his subject as movement. In doing this he creates an obvious striking contrast between the soft lines of the figure and the bold white strokes of the torrential waves. Similarly to both “Romaine Lacaux” and “The Red Kerchief…” Gauguin uses strokes refracting white light in order to place emphasis on his subject. But, though he uses this technique, the effects are different because they emphasize the movement of the subject in contrast with the waves, instead of the dominance of the light as movement. This subtle shift, combined with his skillful use of bright color is a visual turning point from the Impressionists to the Post-Impressionist ideas of pictorial structure.

Another piece, which successfully shows the post-impressionist use of color, is “The Brook” by Cezanne. He has taken a common subject of light and nature from the Impressionists and executed this subject with bright, contrasting and complementing color for the effect of atmosphere. He has gone a step further than this by breaking up elements in the painting with not only color but direction of brush stroke. He has created separate forms of each cell of the painting. For example, under the limbs of the tree on the right there are patches of color very distinguished against each other, yet they create atmosphere. These are even more separated from the horizontal strokes that form a very light blue patch in the lower right corner, forming the brook. We suddenly realize that he has abstractly compartmentalized every component sub-area, the sum surprisingly resulting in an artful simplicity, a kind of quiet being itself. This is key to the Post-impressionist technique of pictorial structure.

Some of the techniques used in both of these paintings are effective remnants of the Impressionists. But, as evidenced by use of color, structure and a greater need for expression, we can see how the Post Impressionists ideals are creating the unprecedented techniques for future art movements.

The pictorial structure of objects in the “The Brook” was explored further by the Cubists. The compartmentalizing and bringing back together of projected objects on the plane of canvas was something the Cubists explored as a new ideal for seeing things from many perspectives at once.

The Cubists would break objects down to a simpler form by trying to depict it geometrically as the sum of parts. Then they would take these parts and see that object from different points of view and paint it from each of these vantages. This new way of seeing would again revolutionize what we now consider a crucial way to look at art, and therefore the world.

The fragmented geometry of cubism was something that no one had seen before. In “The Coffee Grinder” by Juan Gris we can practically follow the lines of any color expecting a sharp angle, an element of line not yet explored in prior schools of art. These angles act as their own frames for the segmented parts, yet you see every bit of the whole piece necessary to feel the piece integrally as an organic sum of its parts. The most striking example in this piece is the slightly diagonal lines at the lower right and upper left corners. These serve as a natural frame within the piece. The lofty trailing at the top of the grinder is seen under the wooden box and then again to the left and again above the grinder. Every element of the grinder is echoed from all perspectives binding itself by the force and tension of its angles into one cohesive piece. 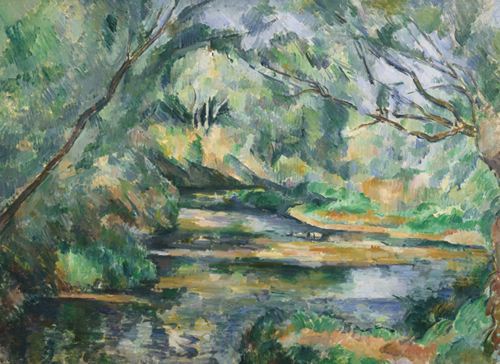 The structural significance of these elements is an integral part of Cubism. Coming from this depth of perspective, “Guitar and Bottle of Marc on Table” by Georges Braque explores the nature of not just color as a contrasting element, but also texture. The objects are separated and disassembled and analyzed but the flatness of this new tactile quality lends another dimension to the effects of the perspective. Just like in “The Coffee Grinder” colors are used for echoing, repeated, perfectly placed almost like musical cadences, on the canvas plane as segments, geometry and blocks of color.

Along with these ideas of progression in Modern Art, we can experience, visually, the traces of its evolution through form, color and expression (among other elements). Artists use the tools of the past to help express and forcibly push against the limits of what should be considered art, knowing ruefully that it might be to the chagrin and displeasure of the public.

There are many works in this exhibition that I have not covered but are every bit as good as these few examples. We are more than fortunate to have this exhibit on display here in Salt Lake City.