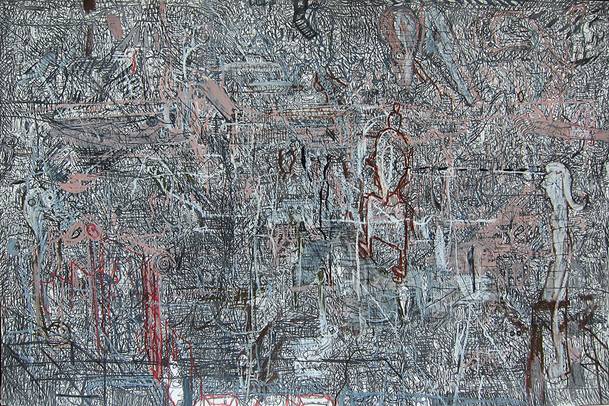 Labyrinths of intersecting lines, weaving through each other and breaking apart, accented by amorphous forms meandering through a canvas that seems weighted to the point of breaking. These are the works of Michael Hall now up at Phillips Gallery. These webs of linear intricacy are extraordinary large canvases with a poppish quality, reminiscent Basquiat, but more focused. Visually, they are nothing short of fascinating, with their density of line and the wealth of “surprises” found in their linear fabric.  As visually appealing as these mappings are, to see them only as intricate and pleasurable surfacse, is to rob them of the philisophical essence at their core.

As he outlines in the exhibition’s artist statement, Hall describes his art-making process as a struggle between, “the urge to name things, the drive to know, to be objective” and the artist’s own subjective influence on that very process. “That mass [the canvas] consists of new information that is being provided and also transformed, something that is always taking place.  I realized that all of this information was being interpreted and defined by my personal history, my subjectivity, which consists of gathering information,” Hall says.

Hall has a very clear understanding of the process that is occurring when “that mass” is in the process of fruition.  He states, “I take a point in time.  I am existing; thinking, feeling, sensing.  At that point I am confronted by a stimulus and as I receive it two things happen instantly.  I define or name that stimulus using the person that I am and the stimulus and reaction are added to my person redefining it.   So my person makes contact with an object, reveals itself by naming the object and is altered by its inclusion, consistently moving on.  It all becomes many lines.”

In essence, Hall’s process is a perpetual cycle that propels the artist to connect and define and to forever be redefined.  This artistic process, this mapping of Hall’s subjectivity, is also a fundamental process that informs the totality of the work… and existence itself.  The canvas can be seen as an act of doing, then as a creation in the making to ultimately be governed by an inescapable subjectivity.

Hall’s work is but a literal manifestation of what we all experience everyday, every moment in time.  Hall’s work, when fully penetrated, might register to some as frightening; forever lost in the labyrinth of this feedback loop the subject can feel helpless, unable to find a place. But Hall’s work is ultimately positivist, as it highlight’s the individual’s role, however uncertain its location may be.

Hall’s work, after all, is not the representation of a prison, of a fixed situation. Rather, it describes the trajectory of the individual in a complicated, revolving door world. “At the point when the image is conceived,” he says, “it is also being left behind, an ingredient of the present but instantly obsolete in its completeness.” This is why he calls his works “static illustrations.” The works themselves, however, are anything but static. They burst with liveliness and vitality, filled with a sense of engrossing energy.

Just as most will not see Hall’s work as static, most will not find life static.  We tend to give our lives that quality of a “static illustration” when we look back and encapsulate experience in a story, something that explains how we got from point A in our lives to point B. That path, however, is more like Hall’s works, complicated, with challenges unyielding, full of change, variety, growth, but also the pure joy of living. From the appearance of Hall’s canvases, surely his has been and will continue to be a life brimming with a complexity of interests, ineluctable motivation and rich livelihood.

Salt Lake’s Phillips Gallery is currently featuring an exhibit of new works by Michael Hall, paintings by Carolyn Coalson and sculpture by the late Lee Deffebach through October 12.