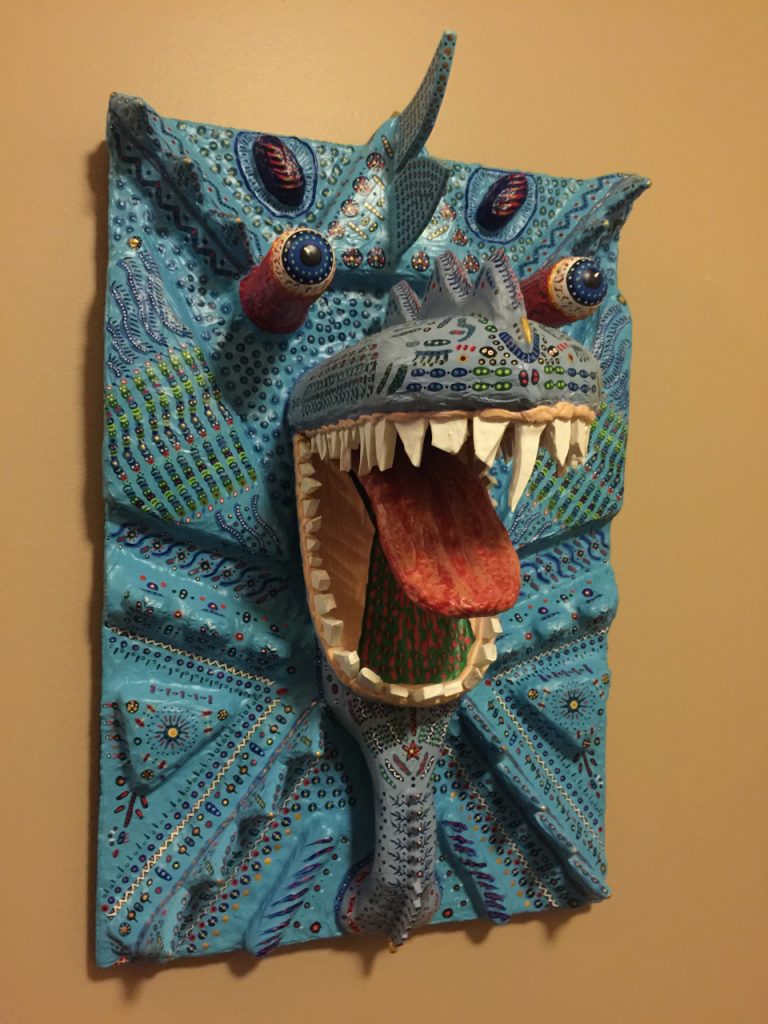 “Very different,” “unique,” “colorful” – all are words Michael Beasley hears when he shows his three-dimensional masks to people. The artist has been making the intricately patterned masks, reminiscent of Native American or Mexican folk art, for nearly five years but had never tried to sell them until recently, when he accepted Thomas Howa’s invitation to show his work in the Howa Gallery in Bountiful. Beasley’s work will be featured, along with pastel paintings by Chris Cook, from Jan. 8 to Feb. 1.

Much as an abstract painter responds to materials in an organic, intuitive way, Beasley allows each mask to evolve in ways that are different than the one before. “They are all one of a kind,” he says. “I couldn’t make a piece to look like another.”

The evolution also depends on the materials at hand, which include upcycled bits of plastic, pottery, metal, cardboard, or wood—even a cabinet door—though what’s behind the mask is seldom obvious. Beasley, who works as a chef, rescues potential mask materials from the garbage—a Costco-size mayonnaise plastic jar, for example, or broken ceramic plates.

Once he finds an interesting base, he applies layers of acrylic latex from the hardware store (like that silicone stuff that comes in a tube to caulk the bathtub). Beasley applies it thickly so that it can be pushed and pulled into interesting shapes and facial features. As it dries, it can be indented and scored using various tools to give it textural interest. Some features, such as a tongue, eyes, or horns, are molded separately and attached with acrylic later. 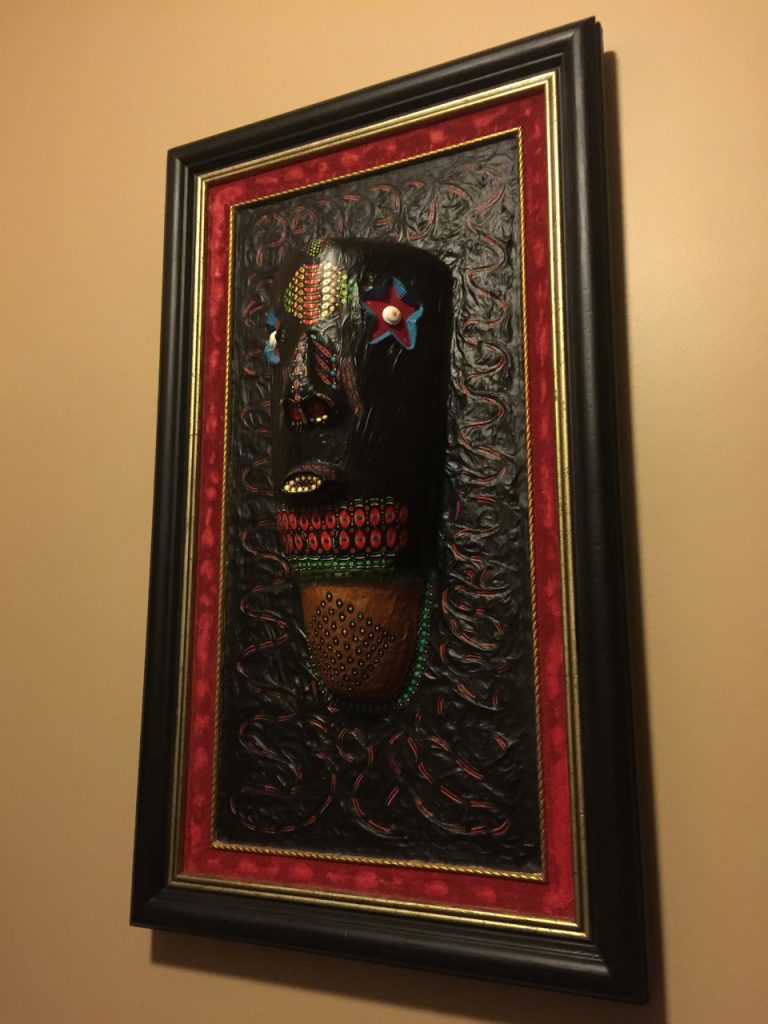 All of the work to this point has been an intuitive conversation with the materials, with no real vision of the finished piece. As the dimensional features take shape, Beasley draws on the surface with markers to designate the position of the next layers of features, such as the eyes or the mouth.

Eventually, the painting process begins. Using thick acrylic paints applied with brushes, bamboo sticks, or other tools, Beasley creates repeating, decorative patterns over the hills and valleys of the surface and features of the mask. Some are mounted to plywood bases. One used a cabinet door to frame the sculptural pieces. Base and 3-D features are unified with layers of paint and pattern.

Beasley was raised in Utah but ventured to Seattle with some friends when it appeared that Utah had not much to offer the young adventurers. Beasley worked in the hotel/restaurant industry but hung out with artist friends and learned a lot by watching. Though he might not have called himself an artist then, he now realizes that he’s made art since he was a kid, playing with materials in his dad’s wood shop, or drawing and painting. He noted that many of his Seattle artist friends incorporated found materials in their art. He also was influenced by the Native American totems prevalent in Northwest culture.

After about 20 years in Seattle, he noticed that his home state of Utah had become more interesting and progressive and moved back in 2010. He recalls that in February 2011, he had some broken plates that he thought might be repurposed as teeth in a sculptural mask. His mask-making evolved by trial and error. “Now that I’ve been doing it for five years, I’ve mastered my process,” he says.

Though he’s never tried to price his work to sell it, he has shown work in a couple of Salt Lake City restaurants —Tin Angel and Frieda Bistro—for a few months at a time. “When I drove by Howa Gallery shortly before it opened, I stopped in and met Thomas Howa,” he recalls. “I had some pieces of my work in my car and invited him to take a look. He asked me to display my work for the opening last May, but I wasn’t ready.”

Beasley has been busy. He now has an inventory of about 70 pieces finished or in process. More than 25 will be on display during January at the Howa Gallery. 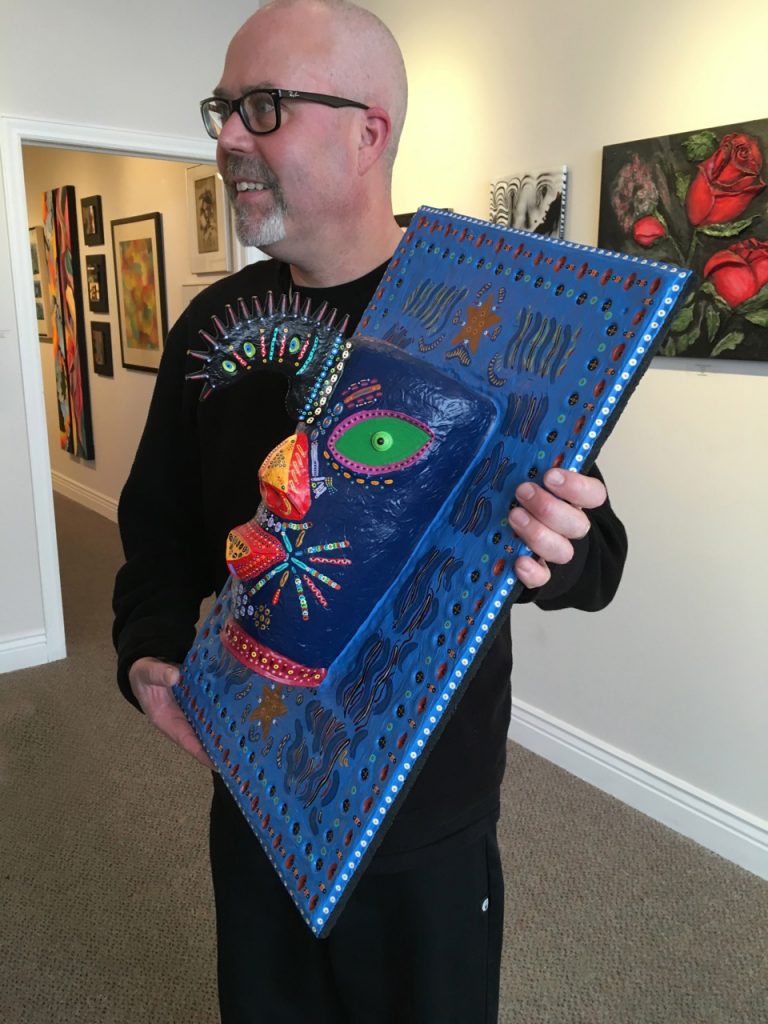