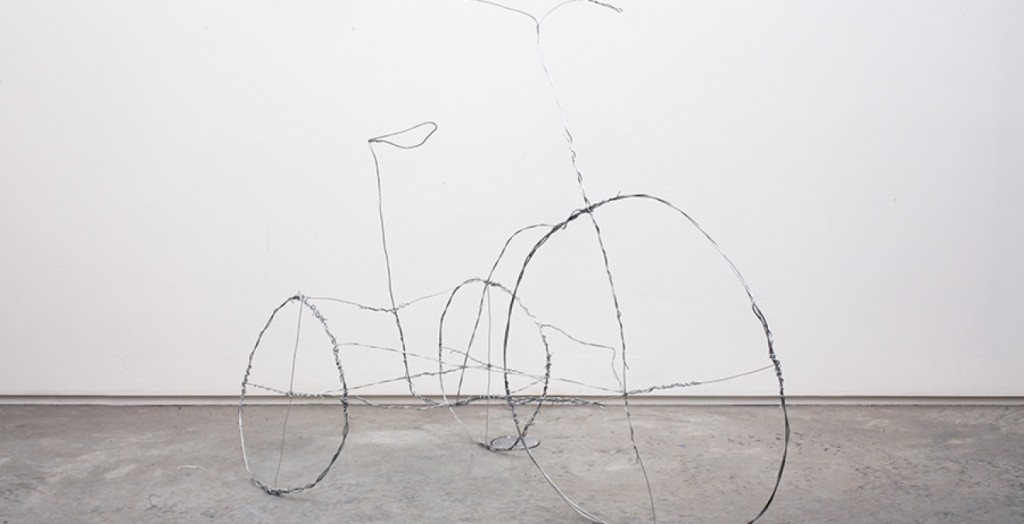 Amalia Ulman’s anti-war installation is an ambitious, multimedia work in which the artist clearly has invested much of herself. In a dark room, three independent elements—wire sculptures that can be felt and navigated around as well as seen; recorded music from an unseen source; and in an innovation that is virtually unique, piped-in aromas—coexist, clash, and interact, attempting to convey presence with an intensity none could provide on its own..

Surely anyone with a complete set of sense organs can think of occasions wherein a mix of simultaneous stimuli combine to bring on a powerful effect. Think of the midway, where lights, music, the roar of the rides, and the screams of their riders combine with the smells of popcorn, caramel, and stomach acid to create an overpowering sensory experience. The way the odor of black powder drifting downwind from a fireworks display can turn the sights and sounds of explosions into a body blow is due to a fundamental fact of anatomy: smell is the most ancient and immediate sense, the only one the brain gathers directly, without an intermediating organ like the eye, the ear, the tongue, or the skin.

That said, it’s not Ulman’s desire in Stock Images to make war more imminent. Rather, she has a cognitive point to make, and in this she may have outstripped the rational powers of raw sensation. The stated aim here is to use sounds and aromas to make cerebral connections. Specifically, she uses rock music to conjure the youthfulness of many soldiers and the smell of apple pie to identify their cultural origins and motivations. It doesn’t seem to have occurred to her that today’s armed forces are often old before their time, serving their third, fourth . . . or seventh tour of duty, or that their music is as likely to be country or hip-hop. Yet these cavils may not even matter if the associations intended cannot be made without recourse to the Achilles heel of today’s art: the printed sign on the wall telling an audience what to think and how to feel. Retailing the artist’s intentions cannot stand in for accomplishing them.

There is the familiar mistake of aiming too high, attempting a rarified or powerful effect that cannot be reached, or at least that a given artist cannot reach. Nothing here indicts Ulman of such ambition. But there is another kind of failure, which is to aim for something that, possible or not, isn’t worth achieving. Even if an artist could succeed in fashioning a work that would dependably forge an association between war and American sentimentality, it’s unclear if anything significant could come from what is, after all, a trivial observation. Every culture we know about that has gone to war has encouraged its soldiers with images of the home they protect and the values they embody, so that while a whiff of apple pie might underscore a suggested patriotic connection, such a narrow accusation seems, at best, prejudicial.

Ulman is to be commended for wanting to use her skills to attack war, but such popular sentiments are so frequently encountered in the arts that anyone wishing to add a voice needs to beware of how much cliché threatens the goal. The challenges are always greater when the subject matter is widely expressed and often viewed. That said, Ulman’s attempt to find out just how many independent sensory avenues can be integrated into a work of art constitutes a courageous, challenging, and entirely timely project. If the answer for now seems to be fewer than can be accommodated in real life, that should only serve to encourage her in making these pioneering efforts to expand the vocabulary of art.

Amalia Ulman’s Stock Images of War is at the Utah Museum of Contemporary Art’s Codec Gallery through October 31.