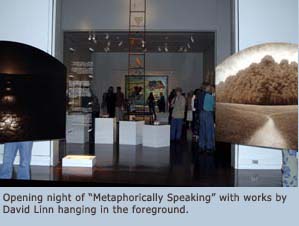 I enjoy exhibits at BYU’s Museum of Art. Regardless of the actual pieces shown, the museum almost always manages to create a wonderfully crafted and visually interesting exhibition. The more I visit the museum, the more I am convinced of the curatorial expertise that has used a unique space to the best of its ability. The University of Utah museum, with its peach walls and airy spaces, is all about light and color. The BYU museum is darker, more contemplative. Even the ground-floor exhibition spaces, where a new exhibit, “Metaphorically Speaking,” is now on display, have a somber quality to them. The paintings and sculpture hover in a spotlight on the museum walls. Walking into the museum’s exhibits is always like entering a Romanesque chapel of space and color and form.

It seems to me the Museum has taken on an ample task: tackling the use of symbol and metaphor in a religious context (which has been such a strong component of art over the centuries), in a religious culture that is much better known for its pragmatism and prose than for its poetry. But as the exhibit attests, artists know how to go beyond their culture and speak with a fresh vision.

“Metaphorically Speaking,” on display through January 8, 2005,  is a varied exhibit of Mormon artists using visual means to create symbols of a spiritual nature. Or so the artists are presented. Some are more and some less symbolic, or metaphorical, as the title of the exhibition would have it. The general sense of the exhibition is that of an educational venue, trying to teach and inform the public about symbols and their use in art. Glass standards with word definitions, designed to evoke associations with what is going on in the artwork, are placed at the entrance to each room or hall. In this sense the curator is an artist, using the paintings and lights and his own elements to create a whole work.

When I first thought of viewing an exhibit of symbolic spiritual art, I thought of Ron Richmond, who creates dreamscapes, usually in a loosely defined interior or vague exterior setting.  In “Exchange #1” we see a favorite trope of Richmond’s: a colored cloth on a chair. In the foreground, a toppled chair is covered by a red robe and in midground (there are almost never backgrounds in his pieces) is an upright chair holding  a white robe. The piece is an obvious symbol of redemption that does not need spelling out to anyone.

In another work, “Fall No. 1,” Richmond uses another obvious religious symbol, the apple, but in a much more nuanced way that I found particularly appealing.  In this case we see two apples presented in a fairly straightforward manner, sitting on one of Richmond’s characteristic diamond floors. The apple. Nothing could be more obvious as a representation of the Judeo-Christian tradition of the Fall. But in this work Richmond shows that he knows how to use a symbol, which as long as we don’t tie it down too tightly may flutter about with various pregnant meanings. These apples have been ripped from the tree and are still attached to their branches. The leaf from one branch reaches out and barely caresses the leaf of the other apple. This is a wonderful allusion to the two very human subjects of the fall and the physical and spiritual intimacy that unites them.

David Hoelt’s “The Long Night Is Over,” a delicately drawn graphite work, is a modern still life to represent resurrection and rebirth. A fowl – or rather what seems like its dead carcass – appears pinned to a projection wall.  It rises above a Nike shoebox. If we have read the dictionary definitions on the standards for this room, we know that Nike is the Greek Goddess of victory. The shoebox as tomb doesn’t seem so much a symbol as a visual pun, a play on images. To bring alive the Christian tradition of the victory of the Resurrection by uniting it with Greek mythology made sense for the Renaissance, which was steeped in both traditions. But in this case, the shoebox seems more a cute pun (and maybe not even that cute considering the labor-exploitating reputation of the commercial brand evoked by the box). Its mundane, everyday quality fits in with the other elements of the still life – an acorn, and a key chain with a vial of consecrated oil. But these “everyday items” do not fit with the fowl (which seems something out of a Flemish still life). I suppose all the mixing of references might seem postmodern, but the work does not seem to come together for me. Hoelt’s work shows some of the strengths as well as the pitfalls of using symbolic language.

The works of Jacqui Biggs Larsen are much more vaguely symbolic, defying easy attempts at reading. While pregnant with symbolic images, they evade overt statements. Her multimedia collage pieces contain images of girls, princesses, zodiac signs, crowns, ladders, angels, shoes – all either painted or pasted on to a surface which gives no easy answers as to whether the whole work should be read left to right, right to left, up or down. Without making explicit statements, these works give the general sense of themes: journeys, dreams, and relationships.  The collage process Larsen uses  itself speaks about layers of meaning, intersection of experience and understanding. These are the type of works that seep into your consciousness like water into a crack in concrete. These works are personal palmistry, hints and symbols that allow for personal searching and understanding.

Sean Diediker’s works resemble altar pieces in their framing, but their painting and presentation are very postmodern. Diediker contrasts elements of figures represented in a high-contrast format – something out of a rock band promo – with impasto work of scenery or still life in the secondary portions of the pieces. “The Last Supper” presents a traditional scene of figures around the Christ, but in the high-contrast style of the figures, and the models in their youthful, modern dress, there is something refreshingly present in events two millennia old.

Brian Kershisnik, one of the better-known artists in the exhibition, has a number of his trademark figurative pieces in the show. They seem less “symbolic” than the general tone of the exhibit, and not particularly interesting in this setting. The lyric wonder of a man learning to fly in “Flight Practice With Instruction” was a delight, however. 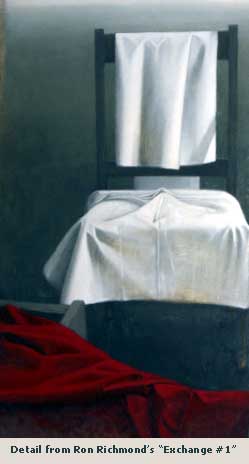 Metaphorically Speaking contains a number of object-oriented pieces, which are certainly symbolic, but in their very objectness seem too obvious. Galen Bell Smith’s “Book of Feasts” features a red-velvet-covered book of scripture, lying on its back, with ruffled papers coming out of its center. To the side is a fork and spoon, inviting one to the feast of the word.

The curators – or at least the artists they selected – enjoy lighted suspension. The introductory piece to the exhibit, Smith’s “Embrace,” is an installation piece that creates an altar-type setting using rock, wood, paper and light. A pillar of wood – from the true cross maybe – is encircled by stones on the floor and, suspended in the air, by floating pieces of linen and parchment, some with holes, others with writing. They are veils and layers of understanding at the same time, getting us near but also obstructing us from the center. The center is a nail, or spike rather, suspended above the wood, almost about to touch it, creating the same sense of delicacy you find in Richmond’s apples.

Mandi Mauldin Felici’s “Haven” is  a large nest,encircled by a protective netting of branches that ascend upward. The nest is large enough for an eagle, but the protective netting establishes the space of a human being, providing a visceral-in-the-round feeling for what a visual symbol can be.

David Linn’s pieces are large, heavy paintings on wood, also suspended in air, their weight a marked contrast to the lightness of Smith’s piece. Linn’s sepia-toned paintings have always held an interest for me. Their stark monotone quality, their repetition of images, creates a feeling I like. Here, a room has been given to four of his paintings hanging from the ceiling) while the walls have a series of blurred images of faces, of what appear to be “ancestors.” The whole piece is entitled “Where They Walked” and the paintings are typical Linn, showing a vague landscape that is really about journey.

Like Richmond, Linn likes to use a flat picture plane while depicting classical receding space. Often done with a hazy horizon, here there are large foregrounds, often paths, heading far into the horizon to an unknown destination. Oftentimes, there are fields of rocks — an impossibility to walk through — one in this case with spotlights hitting the ground being the only indication of a light source. Contrasting these harsh scenes there is also a pleasant meadow with a path through the center. Linn seems to create spiritual landscapes that happen in the past, in the present of our own minds, and in the future of our lives after death.


Overall, Metaphorically Speaking was superbly presented and had some very compelling artists. It is an apt demonstration that Mormon art can deal successfully with the religious and spiritual values of the community without needing to rely on some sort of propagandist realism.

But, alas, nothing is ever perfect. I certainly would have enjoyed the exhibition much more if they had turned off the music playing over the loudspeaker – a whining crescendo of violins that detracted from the contemplative aspect of the exhibit. The exhibit, after all, is an attempt to give the public a chance to contemplate and appreciate the symbolic quality of “spiritual art” being created by contemporary Mormon artists. 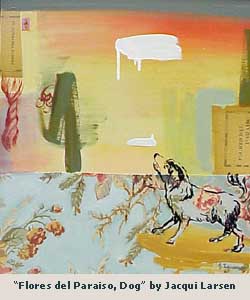 Also, the educational aspect tended to detract somewhat from the nature of the exhibit. When symbols are overtly defined, as seems so often in Mormon culture, they become allegory and lose the power that resides in the vagueness of a symbol. The museum does not go so far as to spell out the meaning but they come close. They even provide scriptures to accompany the words they have defined, so that your journey for a symbolic understanding is like looking through a biblical topical guide or word search. Despite the tendency towards didacticism, the curatorial guideposts of the show are done in a such a visually pleasing manner that they seem to become part of the works themselves; as if the curator was an artist using all to make an installation.  I highly recommend the exhibition to anyone in Utah interested either in Contemporary Art or Mormon Art or both.