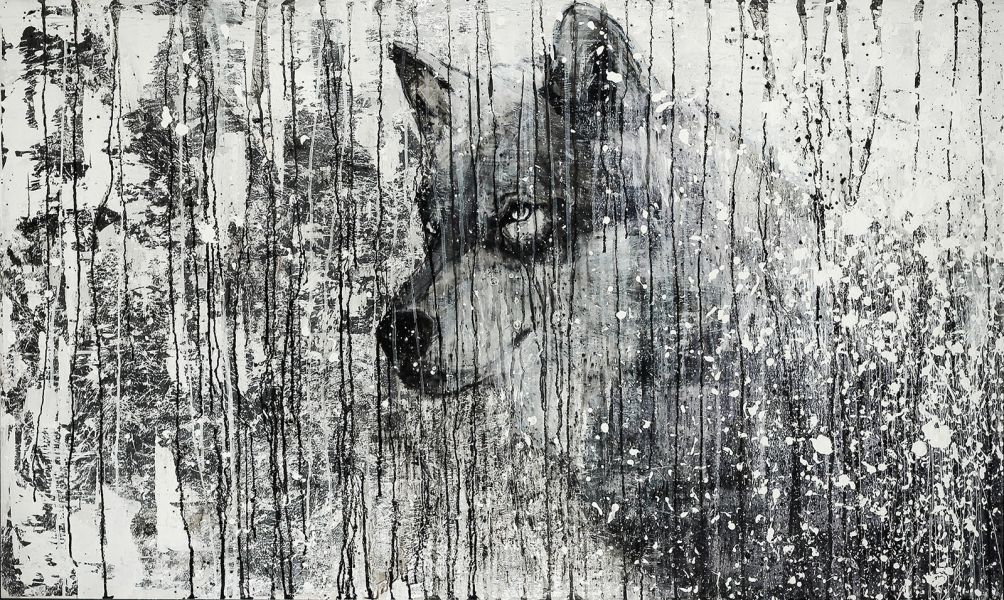 Gloam, meaning the making or growing of twilight or dark, now called “an archaic Scottish verb,” was drawn from Old English glom, for “twilight,” and glowar, which meant “glow.” There were, of course, early American Luminist painters— Church, Bierstadt, and Cole — who began the gloaming habit: appearing suddenly in the smooth, glossy murk of their landscape paintings were paths of light, the sun seeming to choose what to light and make golden and transcendent in the painting. 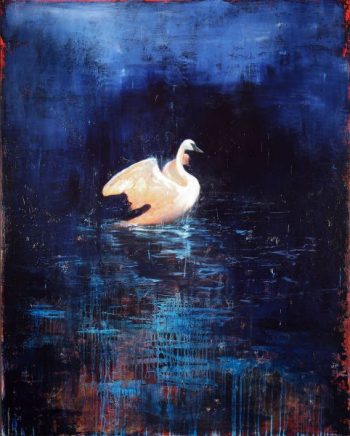 Matt Flint, now a college art teacher in Wyoming, began as an illustrator, and the illustrational, storytelling sense is lurking, still strong, in these mainly oil and acrylic paintings on thick wood panels. As you look at “While the Sun is Shining Through”  your ears feel hungry, so strong is your story sense. You want giant operatic music to accompany this outstanding painting in the group — how could there be no music as you watch the huge sunlit pale swan in a dark glade gathering up its wings to fly? Sun, not moon, is in its title, Flint points out, because, though many might interpret this as a moonlight scene, with its background of deep violet blues, the swan is actually lit by the sun, which seems to have found only the swan to light brightly, turning it luminous. Illustration instincts again: illuminating and spotlighting is also what writers, illustrators, and moviemakers do.

In most of Flint’s close-ups (“really almost portraits,” Flint says of these paintings), bears, wolves, horses, and owls pause, looking at us through what often appears to be whitened sleet, a waterfall of milky water. Heavy-eyed wolves in “Standing in the Shadow” and “Intent” and “Absorb the Sound” are as if behind a ghostly wood-grain pattern. (Note: Flint, in his biography on his website, says he hated seeing areas of land around where he lived as a child, in Missouri, being subsumed one by one by building sites). Is the whitish sleet in front of them in the paintings to protect us from being too close to them? Or to protect them from us? (Another note: Flint says he has been able to be unusually near wolves: There’s a wildlife sanctuary/rescue not far from where he lives in Wyoming.) 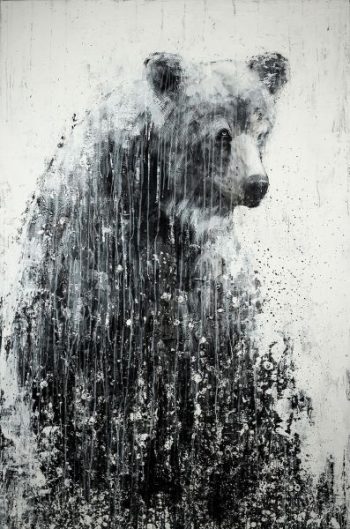 Shadowy vast gray and black and white bears are similarly screened from us, in sleetish drizzle, in “I am the Mountain” and “Coming out of Hibernation.” But, like a chef with a low boredom threshold, Flint adds, as an underlay or as a convolution on top of the acrylic and oil paints, enamels, gold or silver leaf, marble dust, liquefied wax, Japanese ink, a solution pressed from walnuts —inventing as he goes, each painting different in its ingredients, “mixed media” a hilarious understatement. (The artist’s wife, Angie Flint, is a chef of some renown in Wyoming, operating Lander Bakery.)

Silver and gold leaf are in or atop some of these paintings, most liberally appearing in one of a very large black and white and gray wolf (“Standing in the Shadow”). “I like the idea,” says Flint, “of using something used in paintings considered sacred in the Renaissance for religious figures. Instead, I’m using it while painting wildlife. And using as much as I want to, instead of the way they did, very sparingly.”

In “Northern Sky,” where a row of swans fly, Flint has added the inflections of spatters, dots, impasto and vertical and horizontal striations, even jagged rapid pencil scratches, suggesting the whirlwind uplift and power of birds.

In “So Much is Happening All Around,” we see one lone white horse from behind. The horse’s more distant head merges bluish into blueness of the mostly blue painting’s background. It reminds us that our backgrounds and habitat, in our human lives, are both mooring and dissolving us, too; we’re all only part of a play. 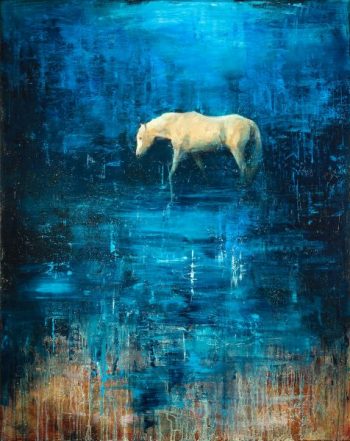 Portions of another white horse in “To Live in the Colors” almost dissolve into blue background. Perhaps Flint is pointing out that the domesticated horse has passed through the magic veil of the wild, is in some exile, like us.

It’s sometimes said the greatest quality an actor can have in movies is an unusual blankness of eye-expression. That almost erased quality, it’s said, makes the viewer eager to fill in that blankness with his or her own imaginings, the actor an avatar for you to transfer your feelings to. In “Somewhere in the Sky,” one large serenely wind-gliding owl is portraitized by Flint: the gray flat milky simple blankness of its round lusterless eye-orbs invite you somehow to imagine what this owl might be thinking of as it peers at you. Again, the feeling of a character, the lure of story. 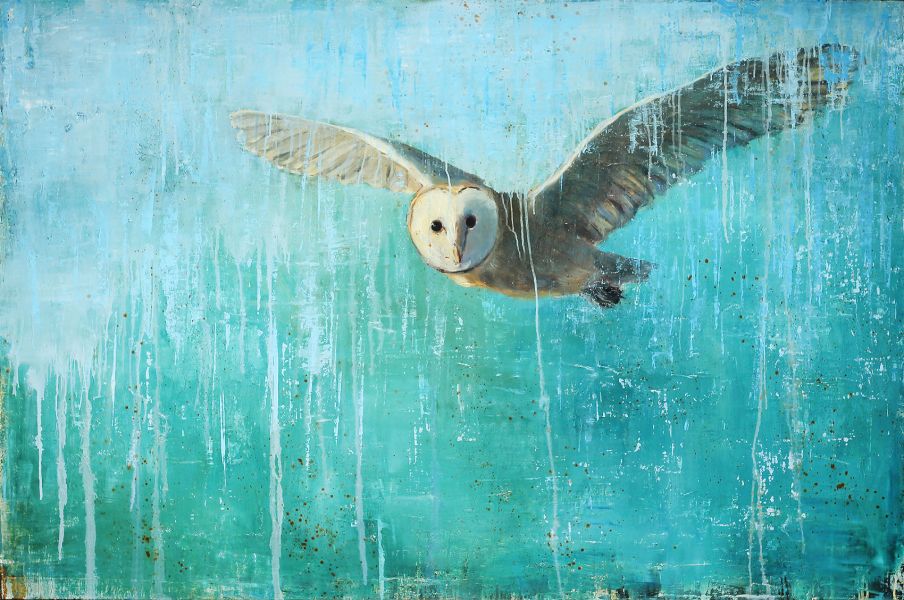