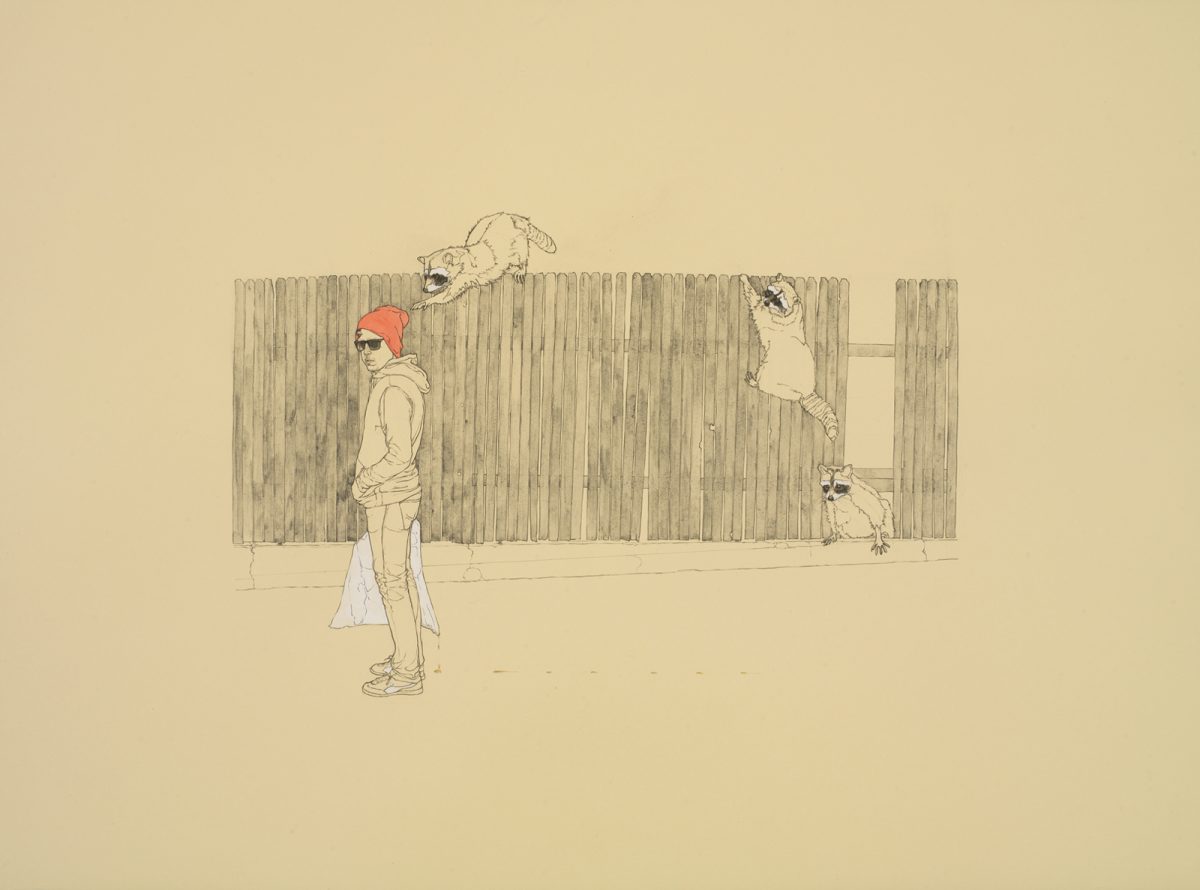 Pass quickly through Worry Lines at the Salt Lake City Library, as patrons using the 4th floor gallery as a shortcut between restrooms and lounge chairs are wont to do, and you may find yourself remarking, “Mary Toscano has gone political.” And sure, in her exhibit of new drawings there are works dealing with ecology, pollution, the occupy movement and food sourcing. But these are not political works — at least not strictly; and not principally. If anything they are works about space, which is ironic considering how little of it the artist uses.

Just thinking in terms of square footage (or square inchage in this case); consider that Toscano only fills up about a sixth of the space she allots herself. And by “fill” we are talking about figures executed in her simple though elegant line drawings accented by colored washes. But by using so little of her space, Toscano brings attention to it, activating the emptiness with possibility. In this latest exhibit, the mechanics of her art have made a perfect union with her thematics.

“What a Fine Nuisance” a male figure, aged somewhere between youth and responsibility, calmly eats his breakfast. He stands within an interior that is established by the presence of an oven, a sink, and a set of cupboards, each unattached to the other as if our protagonist is in a home decor showroom. This briefly suggested interior setting is interrupted by the unexplained, and, to the man, seemingly inconsequential presence of a dozen pigeons. They are sprinkled across the space, bringing the unhygienic exterior into the domestic interior.

The setting, however cursory in this witty work, is missing in most of Toscano’s other pieces. In the drawing that hangs next to “What a Fine Nuisance,” no context or background is given for the four primates that sit in a circle. They appear to have little to do with each other, except for the largest who, dressed in his flannel shirt, reaches towards another. A looping red line, that reminded me of Harold’s purple crayon, runs along and between the figures to highlight the work’s title, “Bloodlines.” But don’t worry. What could have been simply a reiteration of the obvious bumper sticker of silhouettes advertising evolution is made powerful by the delicate emotional quality of the work. 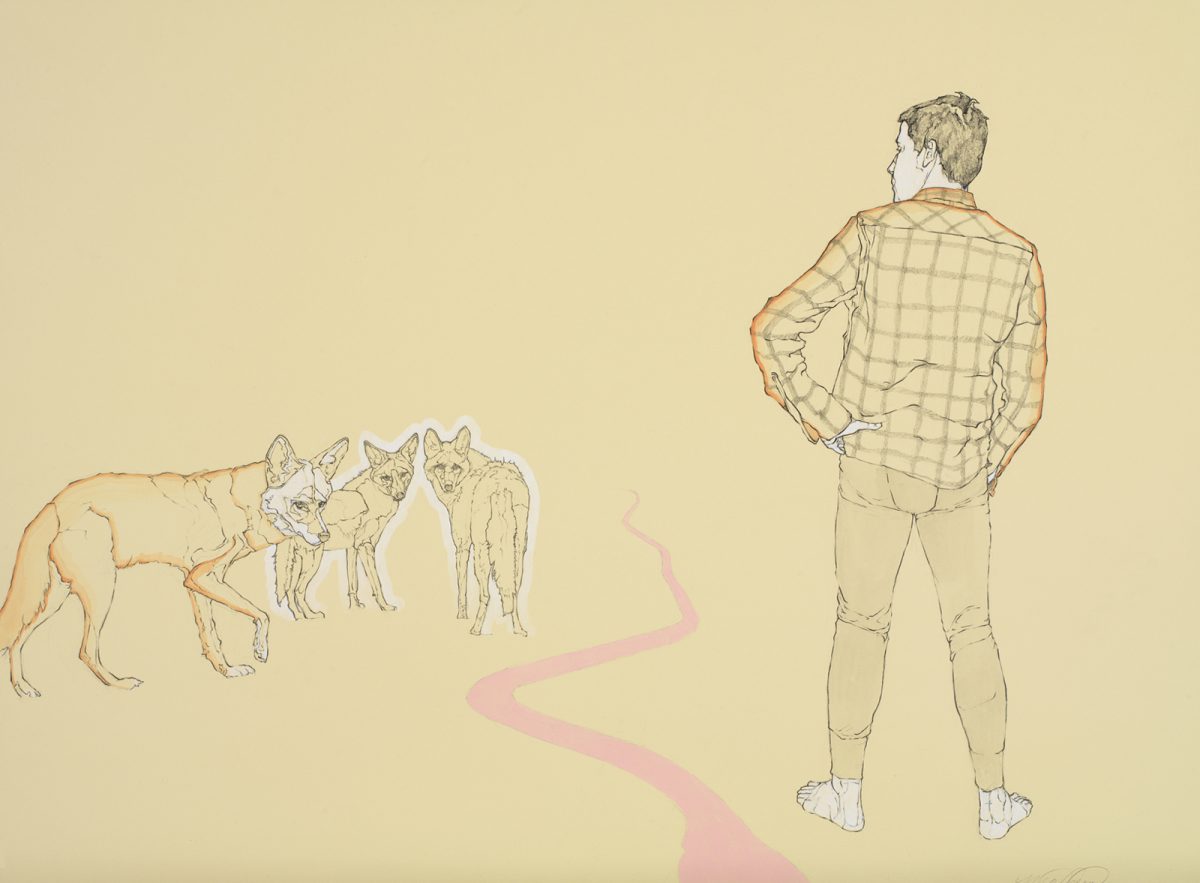 All of Toscano’s works are infused with emotion, both by the melancholic quality of her line and the masterful juxtaposition of her source material. A work like “Insomnia” — where a figure that resembles artist swirls washes of color around her with one hand, her tired eyes highlighted with blue — wears its emotions on the sleeve, but for the most part, Toscano’s works are restrained, going for unsettling rather than dramatic effect. This unsettling effect is frequently achieved by the juxtaposition of source material. When the three coyotes of “A Line Drawn” are placed opposite Toscano’s recurring male figure, they create an intriguing if unspecified story. The man’s insouciant stance suggests the line separating the two worlds has been drawn out of reasons other than fear or the need for protection. Replace the man with a young girl, as Toscano did in an earlier work featuring, three baboons and the effect would be substantially different. Use any of the four sets of figures in a different drawing and the outcome would be completely changed.

The unsettling quality of Toscano’s work is enhanced by the ambiguity of her narratives. Even a work like “King David,” which features images of one man making protest signs, another being arrested, escapes concrete interpretation. If the central crouching figure is meant to be the David of the title, which David? The triumphant king or the fallen sinner? The genocidal warrior or the disappointed father? And who is that redhead approaching from behind?

“Good Fences” is a more playful work, though equally open to interpretation. The title brings to mind Frost’s “Mending Wall,” a poem whose irony is lost on many readers, though I don’t think it would be on Toscano; but the image of three raccoons climbing over and through a wood fence while a young hipster takes out the garbage reminds me of DreamWork’s Over the Hedge, an example of the allusive richness Toscano achieves by filling in some but not all the space. 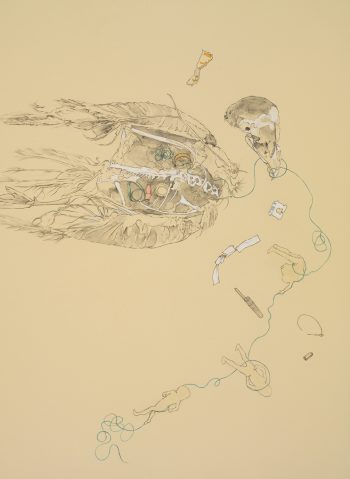 Not all is ambiguity in Worry Lines. The worry of the title is more explicit in “Pick Your Pink,” a work meant to remind us that despite appearances the pink salmon filet on our plate likely came from a farm rather than the diminishing wild populations. One wants to thank Toscano that her message is conveyed in this playful manner rather than from the abundant populations of didacticism out there. Her views are even more explicit in “Plastic Makes It Possible,” where manufactured space invades the wild, as the carcass of a bird is entangled with bits of plastic from a variety of sources. There’s not a lot of ambiguity here, and none of the interaction that activates many of the other works, but there’s something unsettling all the same – how something so ugly can be made so beautiful by this artist’s signature line.

Mary Toscano’s Worry Lines is at the Gallery at Library Square through April 27.