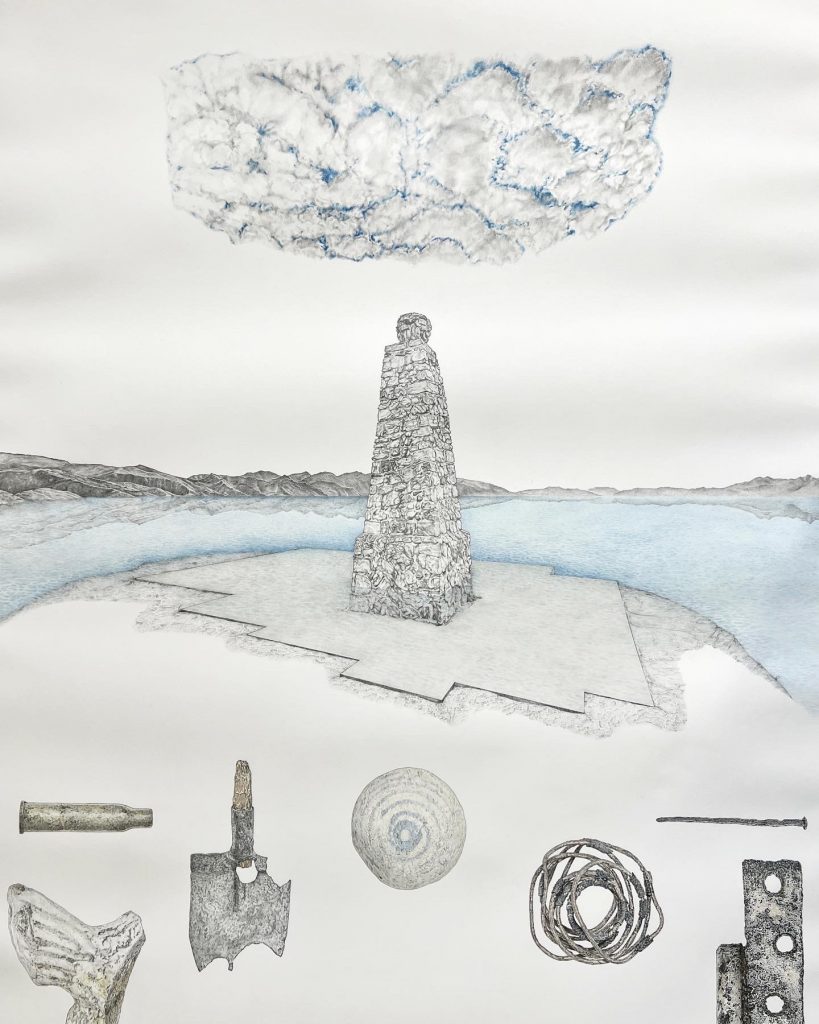 There’s an old story about someone who stared at something so intently it began to smolder — and eventually burst into flames. It’s suggested this is only possible when one looks at it the way artists look at their subjects. And no, they don’t look at things the way most of us do. In fact it’s quite likely that when a person says, “I can’t draw,” what they really mean is they don’t know how to see like an artist, so it stands to reason they can’t draw what they don’t properly see. Hint: one individual who made this point said the reason she became an artist was because it earned her social permission to stare at things longer than would otherwise be socially acceptable.

These thoughts are to introduce the third major exhibition of one of Utah’s premier drafters. In an age when other artists boast functionally of their poor drafting skills — a once-revolutionary or avant-garde gesture — Mary Toscano draws like a Renaissance master, and has no problem with social acceptance of how she applies her skills. She’s that rare artist who may delineate an object and then just stop; it seems some other artists feel their subjects are trivial in themselves and need to be located in a scenic context. Or maybe they didn’t get the Duchamp memo, that being chosen by an artist is sufficient to make anything art. Toscano hints that she has issues with landscape, perhaps feeling it distracts from, and even camouflages, the object of her interest. If so, she’s right. 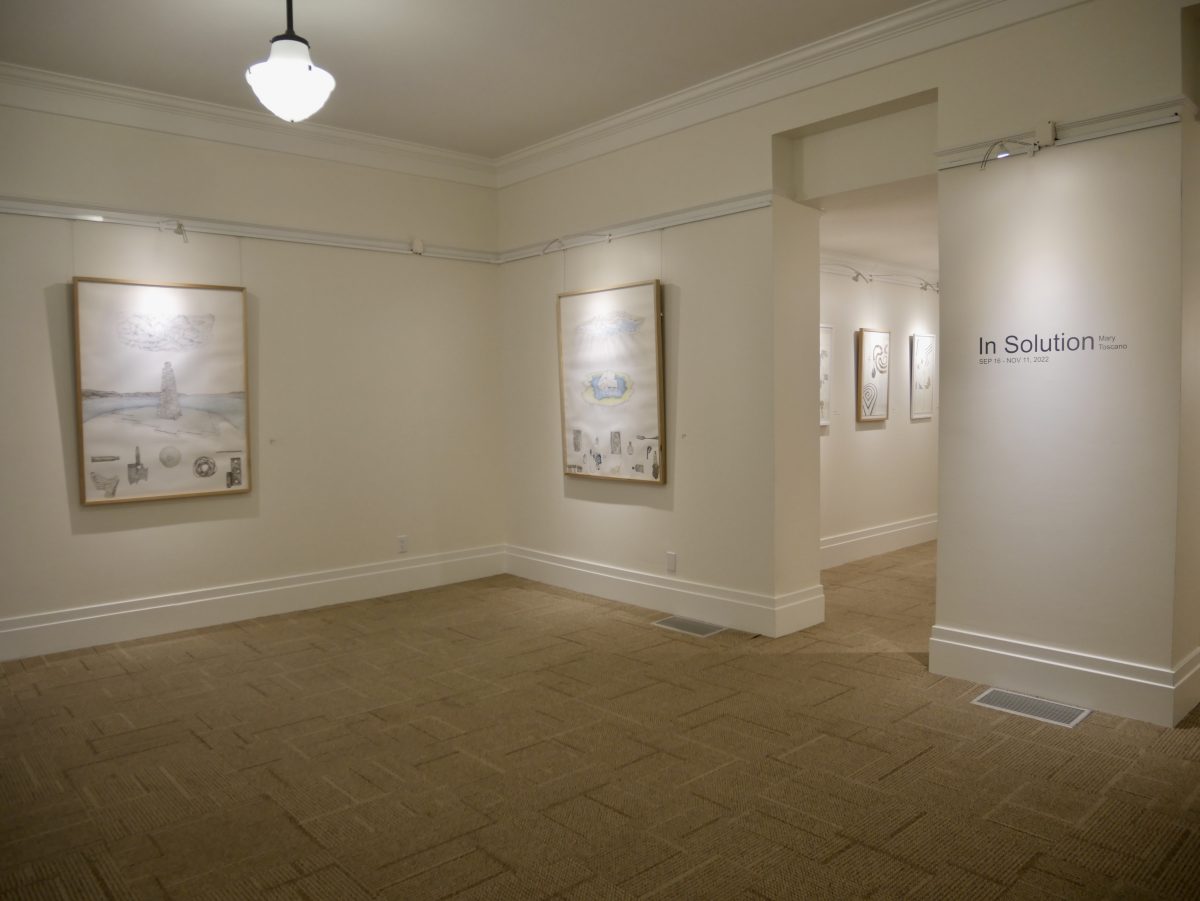 In Solution, a set of four monumental drawings, is currently on display in the front room of the Alice Gallery, where it will be the gallery’s final exhibition. It’s a worthy choice for both the gallery and the artist, whose works proffer a rare mixture of infinite focus and intricate detail that can energize resonance in an intimate space like the Alice’s. As for Toscano, she makes no secret of her conviction that death is a proper theme of art, and her work will be seen to befit the final days of one of Salt Lake’s more respected galleries. 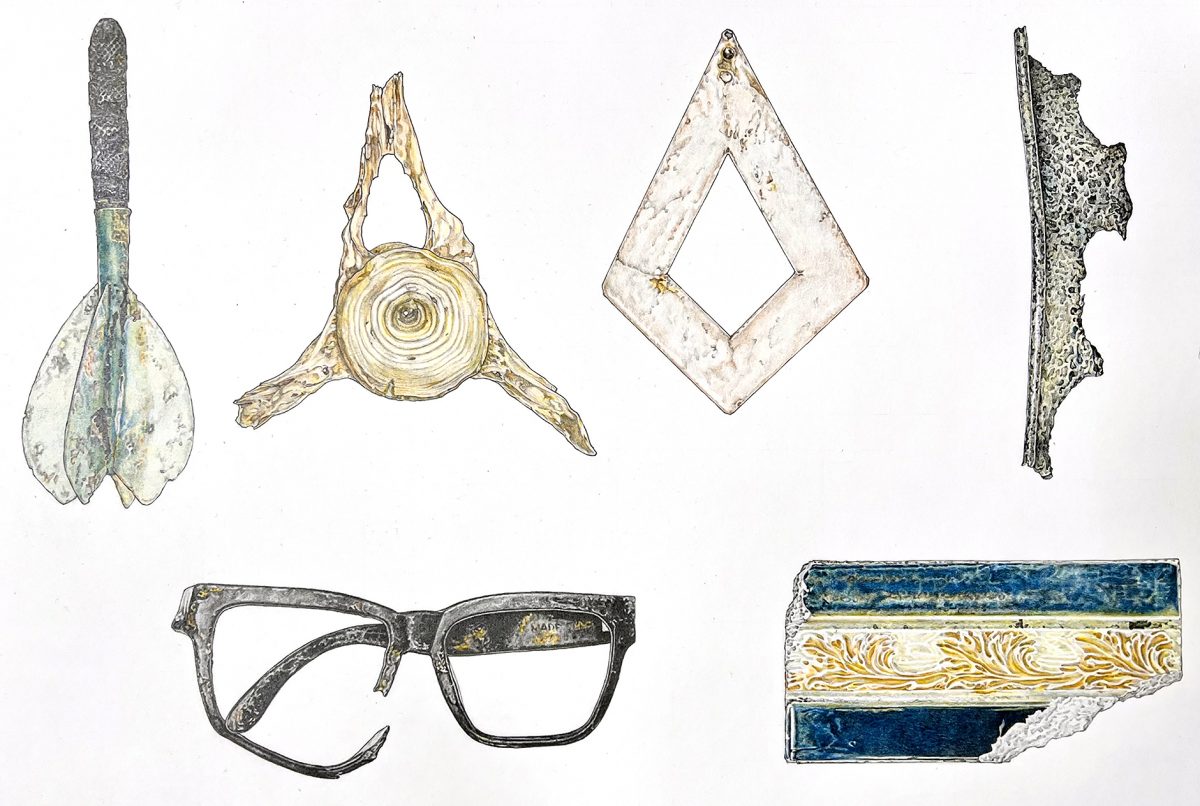 Across the lower edge of each of the four parts of In Solution runs a banner-like array of what might be called either found or personal treasures. They constitute the primary evidence for mortality as an overall, or, more accurately perhaps, underlying theme. These objects are generally broken, or show signs of having been buried or otherwise discarded. They’re not morbid, however; in fact, they have the power of stories to stimulate thought and argue for a connection to the living. A decaying roll of 35mm film or a damaged music cassette suggest not so much the total loss of data as its gradual decay and transformation. Broken tools and pottery likewise link whomever found and sorted them with the past, even as it becomes dim and harder to visualize. A dart with a missing tip is a tale about what matters most, while a photograph so badly damaged the subject can’t be made out for sure stands in for all those portraits that might, or might as well, depict a famous person or ancestor otherwise beyond recollection.

Each part of In Solution also includes an atmospheric vignette near the top. Weather, at least the visible kind, usually consists of condensed water vapor, ranging from mist to cloud and on to a storm. Airborne water has an existential connection to the primary subject here, which is surface water. “In Phase” stacks three water features together: a shallow depression, a formal swimming pool (with a flamingo float device), and a seemingly bottomless sink hole. “In Suspense” counts on a misty atmosphere to lend additional mystery to an empty chair facing out to sea on a beach. “In Condition” finds a large marine cavern appearing to swallow a trendy new home, suggesting its financing may be “under water.” “In Form” could have been inspired by the submergence of the Spiral Jetty under Salt Lake, like the lake water that inundates this vertical version of a stony monument. 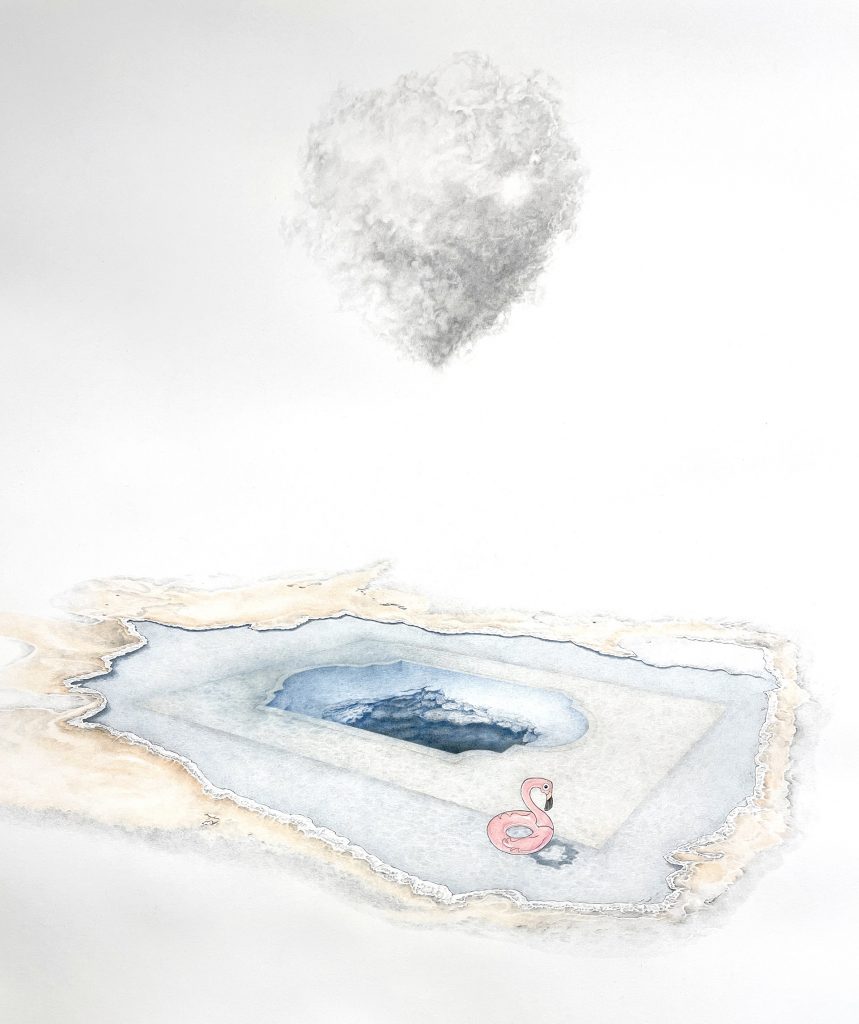 The top portion of “In Phase” showing three water features

All this water could have symbolic significance. The power of water to erode makes it a natural stand-in for time, and while the ancients personified retributive justice in the face of hubris, or unsupportable pride, as a woman called Nemesis, it’s well past time to replace her. What seems most remarkable about this set of scenes is how they differ from contemporary alternatives. For the foreseeable future we can expect to see more images of desert conditions than floods, though there will surely be more of both. What Mary Toscano might have on her mind instead is the miraculous improbability of water’s existence. Of all the planets we know, this is the only one where blue seas alternate with white clouds visible from space. If there’s any sign of certain doom to be measured, might it not be found in a population that is squandering such a seemingly unique and irreplaceable asset? Of course this or that artist may want to take a different and personal view of things, and meaning in art is a rich and potentially overlapping property. But all this water in a time when oceans, seas, lakes, rivers, and even atmospheres are under threat calls for recognition of what matters most, first.

Note: in the rear space at Alice there hangs another special set of drawings. These were shown in 2018, before the Pandemic, when they were parts of a single work on a fifteen-foot long roll of paper. “Provision” was made, using nails and string, for viewers to select parts of the whole, which was cut apart and their choices handed over after the show ended. Such sundered works are almost never seen whole again, and this is no exception — but, by agreement with the owners, as many parts as could be borrowed are on display as an antecedent to In Solution and the resurrection of an unprecedented historical moment. 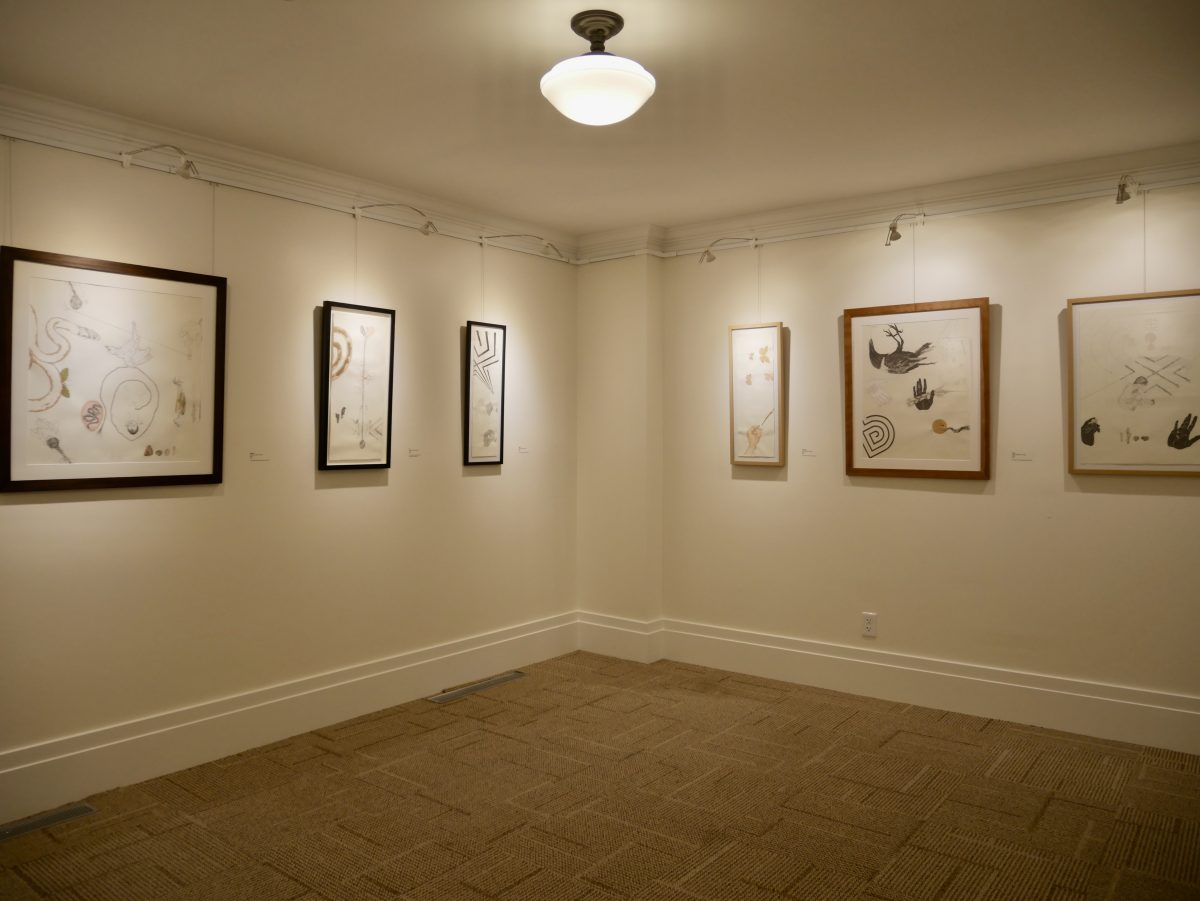 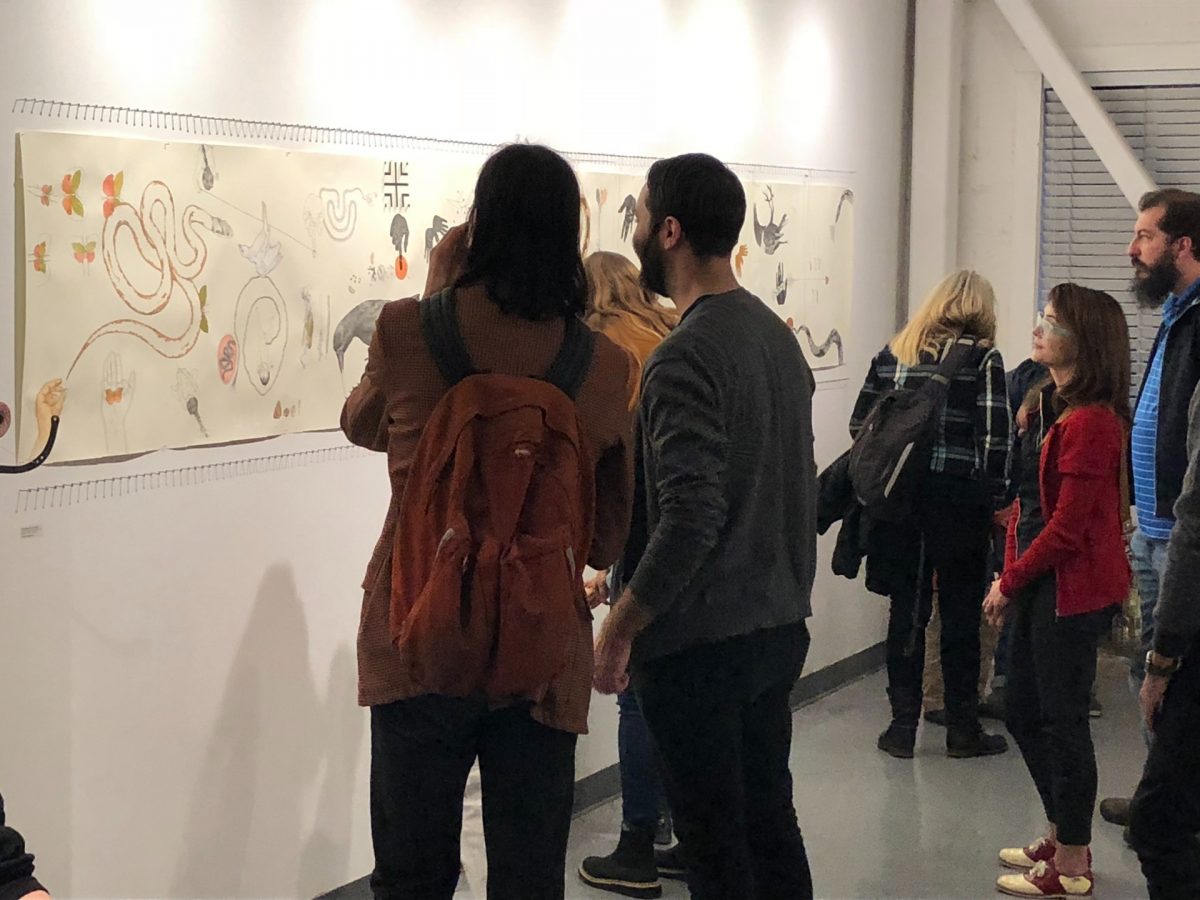