If you’ve already read 15 Bytes then you know about the opening for Stefanie Dykes Cathedral tonight at Finch Lane Gallery, 6-9pm (see page 7). But Dykes’ work is not the only reason to make Finch Lane part of your Friday evening. Also showing with Dykes is photographer Marnae Rathke. Following is a short write up on Rathke from Geoff Wichert, who previewed her show: 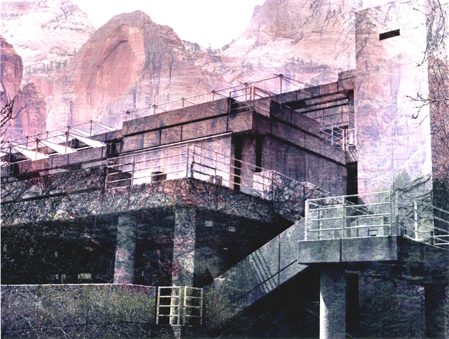 As a child, I often dreamed about a blank, mysterious building standing against a seaside cliff. Rooms in this structure opened into caves, while tunnels in the earth led to empty rooms and stark windows overlooking the surf. It was abandoned, ruined, looming over a sandy wasteland, and I never figured out who built it or why it was there. Nothing in my waking life matched it. And nothing has, until I came upon Marnae Rathke’s evocative photographs at the Finch Lane Gallery (June 6 through July 25).

While it’s not hard to see out how Rathke’s dreamscapes came to be—each ambivalent image is composed of two exposures printed together, one of the rugged desert landscape and another a familiar architectural monument—the eye resists separating the interwoven images, which resolve into a single, unsettling vision. The natural and the man-made merge, blending construction and erosion—ephemeral events against the slow demolition of time passing—into spires, ribs, walls, ominous openings, bearing members, waterfalls. Swelling and collapsing forms suggests the history frozen all around us, hidden in the instantaneous encounter. There’s an argument here that we are part of nature, and that only an error of uncomprehending vision, honed by competition and the struggle to survive, prevents us from seeing the unity of things. Conversely, the way the built can seem either to underlie or to eat away at the natural may suggest something about the dependency or encroachment of one possibility on another. There is also poetry: layered compositions resonate, conspiring with the interplay of light and shadow to create a rhythm that becomes musical, polyphonic: in the best, symphonic. And there is that eerie, even spooky feeling recalled from dreams. We are reminded that the mansions of the lord were here long before us, and we are—and ought to feel like—children exploring an ancient, haunted house.

A reception for artists Marthae Rathke and Stefanie Dykes will be held at Finch Lane Gallery this evening, Friday, June 6 from 6 to 9 pm.