Maia Cruz Palileo paints vivid and colorful scenes of life in remarkable detail, full of specific portraits of what are, however accurate, ultimately imaginary Philippine places and characters. Like her charming figure sculptures, they have not been drawn from life, but rather distilled from research into the history of her ancestral homeland and America’s often unwelcome interactions with the Philippine people during a century of colonial rule. Personally, Palileo uses the plural pronouns that properly omit a binary gender, and does so in a way that is more than usually appropriate here, for to speak of Palileo as “they,” and talk of “their” art work, is to place an individual in the position of representing something larger, an identity that includes many historical sources: visual archives, family stories, and popular imagery among them. In fact, Palileo was born in Brooklyn, New York, and despite being a world citizen, still identifies with Brooklyn and admits to being an American. Of course this represents a candid choice, broadly suitable, not to misrepresent themselves as, or be mistaken for, a native representative of their subject, even as immersion and identification have made this an instance of something familiar, if sometimes controversial: a blend of two inseparable identities, as frequently emerges from colonial experience. 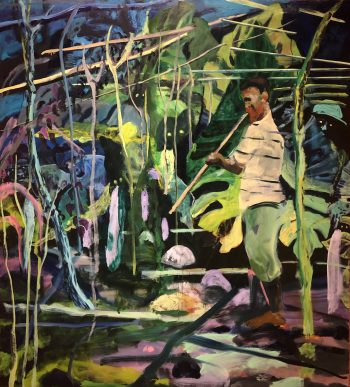 Art archives often give dimensions of art works, and nearly as often this information seems superfluous and dismissible. Yet to stand in front of, say, the painting “Flute Song,” which measures six wide and seven-feet tall, and opens into a far larger visual space, is to be struck bodily by its physical presence. To walk around in a room before a ten- or twenty-foot-wide painting, its scene set in a multi-dimensional jungle, is to become disoriented enough that a life sized, carved wooden figure of a youth, abashed to be caught reading a love letter, becomes another person in that room, a peripheral presence that repeatedly jolts viewers into thinking someone has walked in behind them.

Although it’s possible to enter the Kimball Art Center and walk directly towards these monumental visions, the curators have provided some transitional materials that, without becoming disruptively didactic, demonstrate some of the steps Palileo has taken on the way to producing such complex, imaginary histories that feel real and remain authentically connected to places they bring to life accurately, while not slavishly duplicating them. In a tableau of a dozen domestically-scaled works, visitors encounter an alternative to the half-dozen titans that fill most of the space. Ten smaller works are placed together, as they might appear on the wall of a parlor. Six of them are colorful gouaches, an opaque watercolor medium comparable to the oil paint used elsewhere, but another three are monochromatic graphite on paper, resembling pencil drawings. These are “frottages,” a popular child’s game and occasional artist tool that became a mainstream technique in the 20th century, particularly among Surrealists and printmakers.

In this version of frottage, Palileo carefully copies an original photograph or watercolor, taken from an historical portfolio, of a scene on one of the Philippine’s 7,640 islands, then cuts out the figures and rearranges them into an original composition. Additional textures can be added, such as the steps and wallpaper seen in “Little Golden One,” by taking them from external sources. Then a fresh piece of paper is placed over this collage and rubbed with graphite, which reproduces the shapes and locations of the elements in low relief. Details like faces can be drawn in by hand from the original, and artifacts of the process, such as variations between light and dark, give the result a more lively and artistic character. 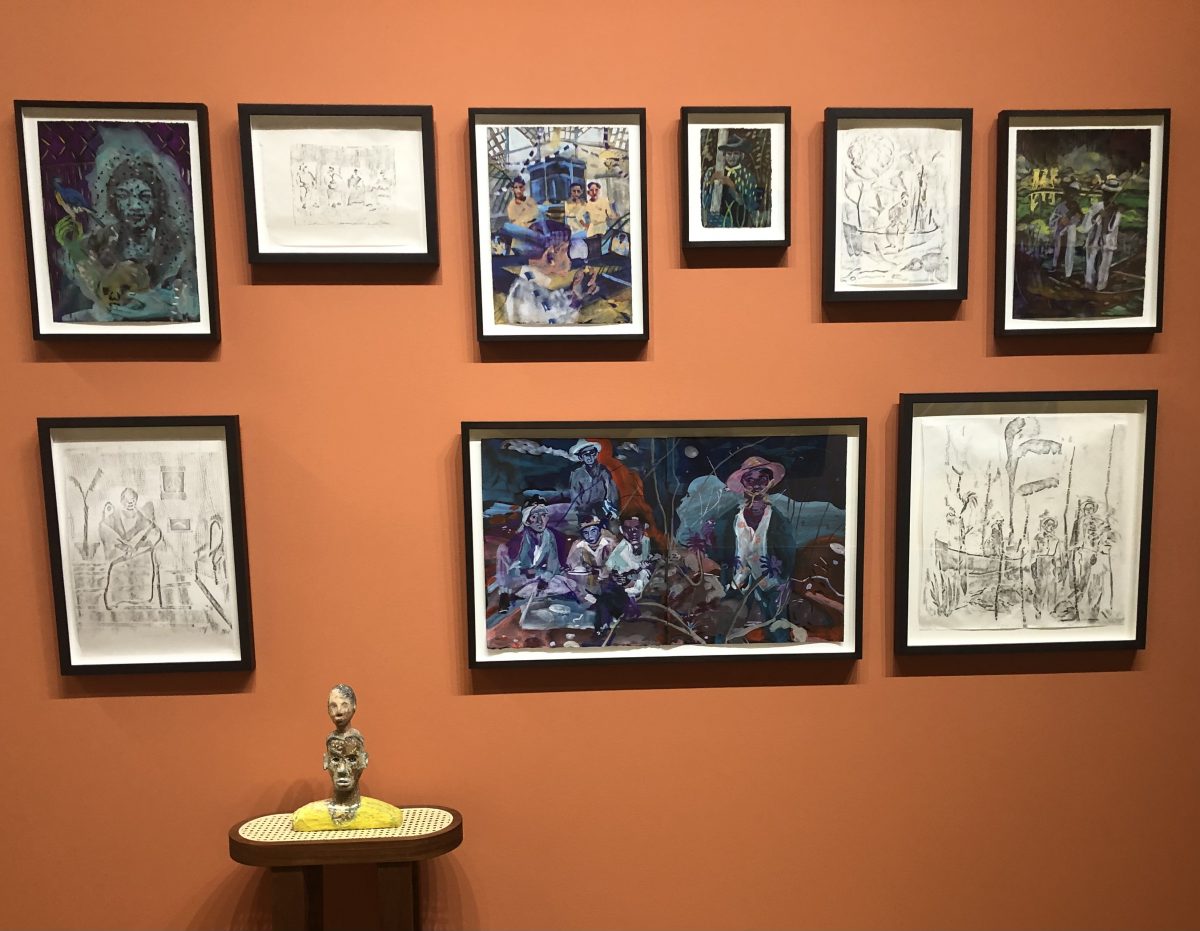 After considering the three frottages in the ensemble, it’s interesting to study the six gouaches interspaced with them. With experience, it’s possible to distinguish photos of these small works from the large oils by the comparatively large scale of the elements, both the details depicted and the brushstrokes that create them. But it’s also possible to see how the frottaged images could be colored over to create pictures that contain elements taken from historical sources, but used in new ways. Palileo’s inspirations may come from other images in the portfolios, or mythology, legends, family stories, or her own imagination. 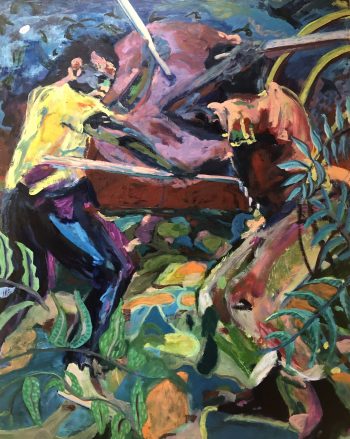 Turning, then, to the Long Kwento, or epic story that Palileo is ultimately telling, it’s apparent that in the large panels, the scenery, plants and animals, and a handful of unmistakeable, yet universal faces, will take turns, like so many repertory actors, in playing all the roles. To clarify, although the Philippines are an archipelago, where boats provide both transportation and food, neither they, nor vistas of the sea, nor beach scenery appear in these landscapes. Neither do wild animals. In fact, most of the animals here are dogs. This is not to present these absences as a lack: the same real presence and artistic absence could be pointed out in classical Greek art, which was also the product of an island culture. It might also be said that the presence of such elements hasn’t elevated the discourse concerning other island nations. The dancers in “Sayaw,” which means “dance,” are closer in spirit to Brazilian Capoera, which combines martial art and dance performance, than they are to Hula dancing, in spite of the similar origins of all three. Palileo’s title, after all, may just as well be an ironic comment on the actual violence that results from being trapped in a colonial predicament.

The 20-foot long mural wherein this long kwento climaxes, “Moving Toward the Sea, Our Many Wishes Lit and Burning Together,” centers around a procession in which a pallet is carried on the shoulders of four men. It appears that their burden contains neither candles, which are often lit to express an individual’s or group’s desires, nor an icon or idol. It might be food, but exactly what is being offered, sacrificed to the sea, is less clear and less important than that one or several of the religions that co-exist among the disparate ethnicities and cultures that occupy the Philippine Islands is acknowledged. Palileo’s project may climax in such passages, in which their art simultaneously presents the troubled history, the mythological legends and family accounts they grew up hearing, revealing them as much as possible all at once, so as to be ever-inclusive. Thus the painting can be seen to be rich in complex details and striking colors, but not so specific in reference. All Palileo wants to convey is everything, at once. Like “Buklaklak,” the portrait of a woman with a corona of blossoms in her hair, whose unique face and expression dissolve into and are lost in shadows, Palileo’s Long Kwento ultimately foregrounds not the thousand details that comprise its telling, but the colorfully emotional mix of suffering and joy that comprise not the isolated story of one ancestral homeland, but the common experience of all humanity, at all times, everywhere.